The New Zealand property market is still settling into its current phase — as reflected by volatility across the regions, with a 31.6% annual price increase in one region and a 5.0% decrease in another, REINZ Chief Executive Jen Baird says 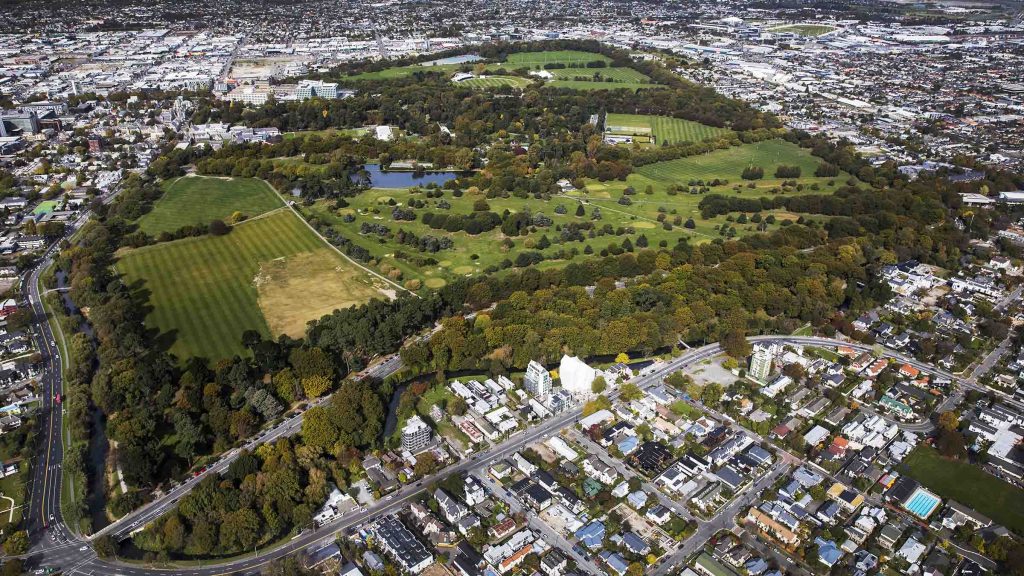 Marlborough was the only region to reach a new record median price this month of $764,000 — up 13.7% on the same time last year. Four territorial authorities (TAs) achieved record medians, the lowest number of TA records since October 2015. More information on activity by region and TA record median prices can be found in the regional commentaries in the REINZ Monthly Property Report.

There is a lot more property on the market and combined with a less positive financial and economic outlook, we are seeing demand dissipate — alleviating upward pressure and moderating price growth.

While West Coast and Canterbury saw annual increases of 31.6% and 20.8% respectively, looking at the month-on-month figures, it’s clear the median property price is falling. However, drawing on historical data, we know prices tend to be more sticky when trending down that when increasing.

Fear of overpaying has overtaken fear of missing out, as potential buyers take the time to consider the financial environment and their increased options on the market.

Despite this and the clear change in market sentiment, some vendors expectations are now higher than the market is willing to pay and it’s likely we will start to see some choosing to hold off selling after ‘testing’ the market.

For those motivated to sell, conversations with real estate professionals will be vital to understanding the nuances of the local market and ensuring the best outcome. 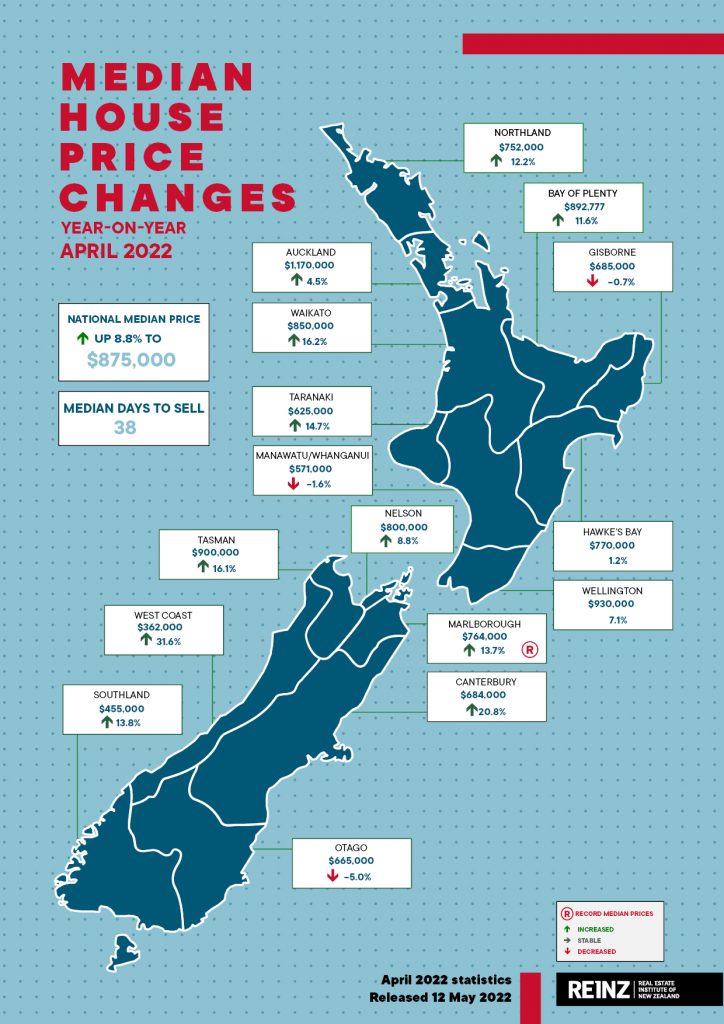 Month-on-month, there was a 29.3% decrease in sales count for the country. We expect sales numbers to fall in the month of April as March is typically one of the stronger months in the annual property market cycle. So, while the nominal change is significant, the seasonally adjusted figures for New Zealand show a decrease of 0.9% moving from March to April — only a marginally weaker result than usual for the month.

All regions saw an annual decrease in the number of sales; those with the greatest annual percentage decrease were:

With more moderate price growth and properties staying on the market for longer, it appears favourable to buyers backed by equity.

We’re now in the phase of the property cycle where demand has weakened, sale counts are down but prices remain high. We’re seeing a slowdown in activity, there is more stock staying on the market for longer, and while annual price growth is more moderate, the month-on-month trend shows a fall in median prices.

Falling attendance at open homes and auction rooms, and a decrease in buyer enquiries were reported across New Zealand — exacerbated by a spate of public holidays through April. Affordability, uncertainty and changing financial conditions remain primary concerns.

Those who are backed by equity and secure in a job market with a low unemployment rate, will continue to see opportunity in the market as more stock increases choice, and prices ease. Owner-occupiers are the most present and active in the market, so while we see a softening in the mid to low price range, interest is solid in the mid to high bracket.

Increases to the OCR, most recently by 0.5% in April, have further impacted affordability, and with the cost to own increasing, property may seem less attractive.

With a forecast peak of over 3.0%, some potential buyers may hold off purchasing in a market where interest rates are likely to rise. For those who purchased property over recent years, these increases were largely expected and factored into banks’ requirement for borrowers to be able to service mortgage increases — providing a buffer for most. The challenge will be for those re-fixing their mortgage.

There were no regional highs on the HPI this month and for the first time since October 2019, an annual decrease was recorded on the index. Wellington was down 4.2% compared to April last year— from 4,053 in 2021 to 3,881. The Wellington region has ranked in the bottom two on the HPI for six months running.

In April, the REINZ HPI showed an annual increase of 6.3% across the country — down 6.2% from its November peak. Weaker results on the HPI suggest buyers — specifically those who are backed by equity — expect to and are paying less. We have heard buyers are increasingly negotiating strongly, suggesting power has shifted from sellers. This may continue in coming months, and those committed to selling their property will adjust to meet the market.

In April, the median number of days to sell (DTS) a property nationally increased nine days to 38. While in New Zealand excluding Auckland it increased by 10 days to 38.

Two regions saw an annual decrease in the median DTS; West Coast, down five days to 27, and Nelson, down two days to 27 — both had the lowest median days to sell nationally.

All regions had at least a 20% annual increase in inventory, with seven recording over twice as much as they had one year ago. For the sixth consecutive month, Manawatu/Whanganui and Wellington saw the most significant annual increases — up 174.6% and 157.4% respectively. Hawke’s Bay, Bay of Plenty, Nelson, Waikato and Otago all had increases in inventory levels of over 100% compared to April 2021.

In terms of listings, Nelson, Hawke’s Bay and Bay of Plenty saw an increase in listings of over 20% compared to the April prior.

The most significant year on year decrease in listings was in Gisborne, down 21.2% compared to April 2021. Canterbury, which continues to show strength in market, has had 11 months where listings have been less than they were the year prior. West Coast has had 10 consecutive months of the same.

The decrease in demand caused by changes to broader economic conditions coincides with an increase in supply. In April 2022, there was a significant increase in the number of properties available for sale across New Zealand — up 70.8% on April last year. The level of stock now on the market reflects a shift in dynamics whereby supply is outweighing demand — the reverse of what we saw throughout 2021.

As evidenced by the median days to sell, stock is staying longer on the market. There are a number of factors at play, from lending criteria lengthening the sales process to people hitting pause — buyers unwilling or unable to pay market prices and vendors not wanting to sell for less than their desired (if now unrealistic) price.

Overall, we have not seen a rush of new listings; rather, the significant increase in inventory levels is being caused by the slowing pace of sales. For example, looking at the annual figures for New Zealand excluding Auckland, in April listings were up 3.0%, sales were down 31.7% and the result was a 93.3% increase in inventory.

In theory, more stock and a slower pace of sales is good news for all buyers, giving them choice and more time to shop around and undertake due diligence. However, compounding factors make for a more complex scenario. Property prices remain relatively firm and the current financial and economic environment has curbed some buyers’ appetite and ability to engage in the market.

Auction clearance rates have eased and reports from across New Zealand say there are fewer people attending — which is what we are seeing more generally as demand is down and sales are taking longer.

In a slower market, there tends to be a trend away from auctions. However, those who do attend are serious buyers, and are still bidding for the right property, in the right price range.

Selling by auction creates the ideal environment to establish the market price at a given point in time. Real estate professionals, backed by market and local knowledge, are best placed to advise on whether selling by auction is the right method of sale for your property and stated outcomes.