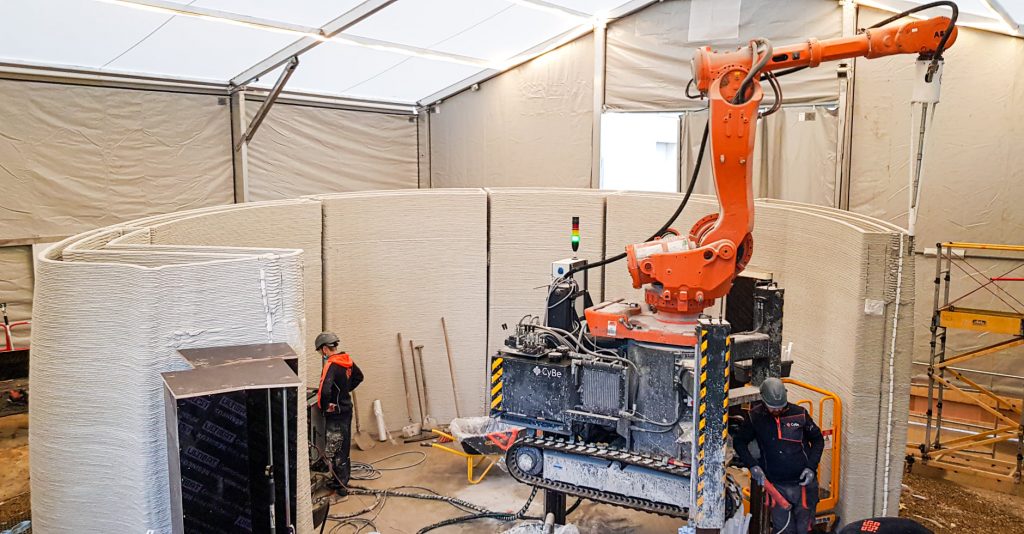 The robot, imported by local technology company QOROX from CyBe Construction in the Netherlands, can build any concrete structure, including houses, commercial buildings, retaining walls, and landscape features such as planters, sculptures and picnic tables.

Hamilton City Council is working with QOROX on the creation of a park bench built using 3D-printed concrete, in what will be the first example of this construction technique in the country.

The 2.8m long bench is a bespoke waka design created by Boffa Miskell landscape architects. It will be printed by QOROX’s robot in just over 30 minutes, from 12pm on Thursday 19 November in Garden Place.

“When I told [Chief Executive] Richard Briggs about the robot and its potential for building things in a smarter way, he immediately said, ‘we’re in’.

“This is the first robot of its kind in the Southern Hemisphere. It can print the walls of an average house in one week at speeds of up to 4.5m2 an hour.”

Boffa Miskell Landscape Architect Frazer Baggaley says working with 3D-printed concrete was an opportunity to push past the boundaries of the typical production process.

“The bench will emerge as a single, seamless object in less than an hour, and I’m really looking forward to seeing the design brought to life.”

In addition to the park bench, QOROX will also build other pieces for the demonstration, which will finish at 2pm. The bench will remain in Garden Place until early in the new year when it will be moved to Hayes Paddock as part of a playground upgrade.

Chief Executive Richard Briggs is proud Hamilton and Council are part of the ground-breaking engineering initiative.

“This is just further proof that Hamilton is a tech-savvy city, a hub for innovation and a leader on the world stage.

“For our organisation, this is an example of our commitment to thinking differently and trying new ways of delivering the infrastructure and services we provide our community.

“This is an exciting project and it’s awesome that Hamiltonians will be able to come and see a small piece of history being made at the demonstration and enjoy the results at the Hayes Paddock playground for many, many years.”

To celebrate QOROX and Council pioneering the first commercial scale 3D-printed concrete project in New Zealand, CyBe CEO and founder Berry Hendriks and two technicians have flown across the globe (and quarantined for two weeks) for the demonstration.