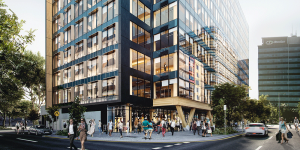 At a height of almost 45 metres, the ground plus nine-storey tower designed by architect Bates Smart will become the future home of global engineering firm Aurecon.

“25 King is set to become the tallest and largest engineered timber office building in the world, which is a wonderful achievement for the Brisbane Showgrounds precinct,” Lendlease Managing Director Mark Menhinnitt says.

Acting Premier and Minister for Infrastructure and Planning Jackie Trad says 25 King was breaking new ground in its use of structural timber in a building of its type and size.

“These materials are sustainable, strong and light, with a structural strength akin to the traditional concrete and steel,” Trad notes.

“This is a great example of the type of development we’ll be seeing more of in the future, and it puts Queensland at forefront of cutting edge sustainable construction practices.”

Constructed with wood, CLT has a far lower carbon footprint than other building materials, the production process produces zero waste, and timbers are sourced from certified sustainably managed forests.

25 King will feature controlled lighting, heating and cooling from a single interface, and large glass areas will maximise natural daylight, while sunshades on the western and eastern facades will reduce energy consumption, further reducing the building’s carbon footprint.

Lendlease said they were committed to achieving sustainable solutions with 25 King targeting a 6 Star Green Star Design and As Built v1.1 and a NABERS Energy 5 Star rating.

The tower is serviced by 56 car parks over one basement level, electric vehicle charging points and has 152 bike racks, 16 showers and 158 lockers.

25 King is due for completion in late 2018, and Lendlease will continue to work with its partners to lease the approximately 7,900 square metres of remaining office space.