Typically a slow month, August market activity was further affected by concerns around rising interest rates and inflation — however, there are early signs of a spring lift The latest data and insights from the Real Estate Institute of New Zealand (REINZ) finds that across New Zealand, median prices for residential property (excluding sections) decreased 5.9% annually, from $850,000 in August 2021 to $800,000 in August 2022. Month-on-month, this represents a 1.2% decrease from $810,000 in July. The seasonally adjusted figures show a 2.1% decrease in the median price as we moved from July to August, suggesting weaker performance than expected.

The median residential property price for New Zealand excluding Auckland remained unchanged compared to last year at $700,000. There was a month-on-month decrease of 2.8% from $720,000.

Four regions had an annual decrease in the median price in August 2022. Auckland’s median price decreased 8.3% compared to August last year, down from $1,200,000 to $1,100,000. Six of Auckland’s seven territorial authorities (TAs) had a negative annual median price movement in August. Down 13.4%, Waitakere had the greatest decrease, followed by Auckland City where the median price was down 12.3%.

Four TAs achieved record medians. More information on activity by region and TA record median prices can be found in the regional commentaries section of the Monthly Property Report.

“With two of those four regions major markets — Auckland and Wellington — affecting the annual movement in the national median price.

“Despite the median property price easing across the country and supply increasing, sales activity remains subdued. These positive aspects for buyers are offset by higher mortgage rates as rising interest rates and concern around inflation continue to put the brakes on for many potential buyers,” observes Baird.

“That said, some real estate agents are reporting an increase in open home attendance. And while owner occupiers remain a dominant force in the market, first home buyers are beginning to re-emerge. As sellers adjust their expectations to meet the market, now is a great time to consider upsizing or downsizing. Although affordability remains a challenge, the relaxing of the Credit Contracts and Consumer Finance Act (CCCFA) and opportunity to negotiate are attracting savvy first home buyers.

“August tends to be a quieter month — as we move into the warmer months, we expect to see a usual spring lift,” Baird says. 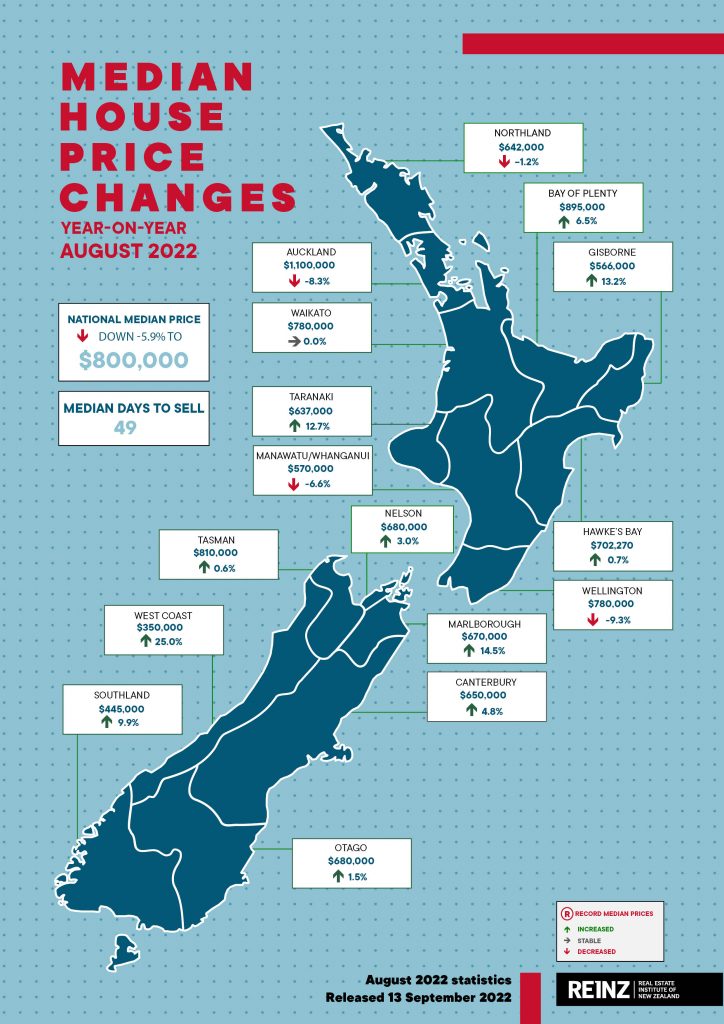 On August 17, 2021, New Zealand went into a COVID-19 level four lockdown, which is impacting annual comparisons.

Several regions saw an annual increase in sales activity. Gisborne had the most significant increase up 72.7%, from 22 in August 2021 to 38.

Those with the greatest annual percentage decrease were:

“Sales activity was slow through August — sales across New Zealand were down 18.3% compared to August last year. However, there was significant variation across the regions, largely due to comparison with August 2021 which was affected by a nationwide level four lockdown.

“While affordability and access to finance remain an issue for many, these factors are compounded by rises in mortgage rates, recession fears and high inflation which are also curtailing activity. Vendors are increasingly realistic with their asking prices, however, demand remains dampened due to mortgage rates and continued affordability concerns.

“Agents across the country are reporting that whilst owner occupiers continue to dominate the market, first home buyers are returning indicating there is a pool of interested buyers there,” Baird says.

Five of the 12 regions had a negative HPI movement, with Bay of Plenty joining Auckland, Manawatu/Whanganui, Gisborne/Hawke’s Bay and Wellington in negative annual movements. Auckland saw an annual decrease on the house price index of 9.5% — from 3,954 to 3,577.

Wellington was down 17.1% on the index compared to August last year — from 4,218 to 3,497, the third largest annual drop in HPI of all regions since records began. Wellington has now ranked bottom two of all regions on the HPI for 10 consecutive months.

Northland topped the index, up 7.9% compared to last year. Taranaki recorded an annual increase of 5.9% — ranking second on the index.

Across New Zealand, the median number of days to sell (DTS) a property in August was 49 — up 18 days compared to August 2021. For New Zealand excluding Auckland, DTS increased 19 days to 49.

“Properties are staying on the market for longer. Enlisting a trusted real estate professional to effectively market your property so it stands out and attracts buyer interest is vital to achieving a successful outcome,” Baird says.

All regions bar Southland saw inventory levels increase by 50% or more in August 2022 compared to the same period last year. Southland saw an annual increase of 47.0%.

Nine regions had over twice the inventory they recorded in August last year. For nine consecutive months, Wellington and Manawatu/Whanganui have had over twice the inventory recorded in the same month the year prior — up 181.6% and 145.6%, respectively, in August 2022 compared to August 2021. Nelson had the largest percentage increase in inventory, up 194.3%, Hawke’s Bay was up 171.7%, Bay of Plenty was up 170.2%, and Waikato saw inventory rise by 169.0%.

“The number of available properties for sale has continued to increase since the end of 2021, primarily because stock is staying on the market longer. The median days to sell a property nationally is now 49 days — up 18 days compared to the same time last year.

“The number of homes for sale in August increased 107.7% annually, while the number of new listings increased 15.2% compared to August 2021. More stock on the market has lessened the urgency to buy. Buyers have more time to shop around and undertake due diligence, and in the current market feel more confident to negotiate on price.

“Some would-be vendors who do not need to sell are choosing not to, anticipating a more favourable market. We are now reaching a point where would-be sellers are hesitant to list their homes, and those who do are increasingly pricing to meet the market,” Baird says.

“Auctions are a great way to see the current market in action. They provide a fixed date and a transparent sales process. In the current market, those choosing to sell by auction are serious sellers — not just there to test the market. Where you have a genuine buyer and seller in the room, properties are selling.

“Vendors are adjusting price expectations to meet the market as it is now. However, buyers remain cautious. This means we are hearing of a growing number of properties pass in and go to post-auction negotiations as buyers hesitate in the auction room,” concludes Baird.