“These investments will unlock two major subdivisions in one of New Zealand’s fastest-growing regions,” Joyce says. 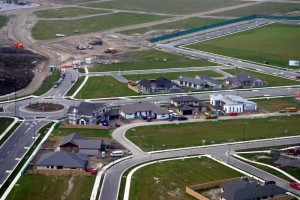 “It will provide network roading and water infrastructure for the 8100 section Peacockes Development on the southern border of Hamilton and a 2600 section subdivision in Te Kauwhata in Northern Waikato.”

The Peacockes development in Hamilton is close to the city’s CBD, university and hospital and has been on the planning books for some years.

“This proposal from the Hamilton City Council includes a new bridge over the Waikato River, as well as an interchange at Cobham Drive and connection to State Highway 3,” Joyce reveals.

This initiative is a massive boost to the supply and affordability of housing in Hamilton, Smith maintains.

“This project will complement the high level of uptake of the government’s KiwiSaver HomeStart scheme for first home buyers.

“Hamilton has one of the highest uptakes; over 1000 people have used the scheme, with $25 million of KiwiSaver withdrawals and $5 million of HomeStart grants to fund first home deposits.

“The uptake has been predominantly for existing homes because of a shortage of new houses.

“This Southern Hamilton development is ideal for new house buyers.”

The Waikato District Council’s proposal is for a greenfield development adjacent to Te Kauwhata that will provide 2600 houses, all within 10 years.

“An exciting aspect of this project is that it will provide significant environmental benefits alongside the supply of housing,” Smith adds.

“The project includes a wastewater solution that will remove all the existing municipal wastewater discharges from the catchment of Lake Waikare and the Whangamarino wetland, allowing a major lift in the freshwater quality in both the lake and the wetland.”

The successful councils will now work through Detailed Business Cases for the projects alongside government agencies, with the first funding agreement from the Housing Infrastructure Fund expected to be signed in the coming months.