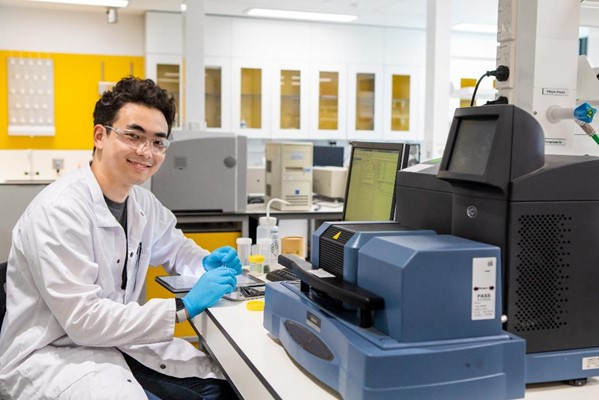 21-year-old Bachelor of Product Design student Andy (Minhong) Park has developed a biocomposite wall panel that uses algae – or seaweed – as a bio-filler to help the building and construction industries become greener.

The plasterboard has moisture control features and is a low-cost material, helping the building industry reduce their footprint through recyclable components.

“Seaweed is fast-growing at 0.5 metres per day and is capable of sequestering around 173 million metric tons of carbon annually. It’s easy to cultivate and can be farmed offshore, not competing for farmable land with other bio-based materials, making it an attractive, low-cost farming commodity.

“Because seaweed can absorb carbon underwater, large wall-panel manufacturers could employ seaweed farming as a carbon offset by growing it,” Park adds.

The finished seaweed plasterboard product has a glossy marble surface, coloured green, red or brown depending on the type of seaweed used.

“Seaweed is also recognised for its ability to absorb and release moisture and is a greener alternative to traditional passive fire protection materials due to the absence of non-recyclable elements. This also makes it able to be recycled and used as a fertiliser.”

Originally hailing from South Korea, Park experimented with the low-cost plasterboard alternative as part of his final year project after identifying the significant environmental impact of the building industry.

After the success of his 12-week project development plan, Park and his lecturers are in the early stages of a commercialisation plan and are working with Kaiārahi Rangahau Māori to identify suitable species of seaweed for product development and marine agriculture.

Park and his team are calling on additional funding and input from industry experts to assist in further research and business development.