Despite Auckland’s strong performance, the median house price for New Zealand excluding Auckland still hit a new record of $700,000, up by 22.8% from $570,000 in August last year.

In addition to Auckland, the other three regions reaching record median prices in August were: 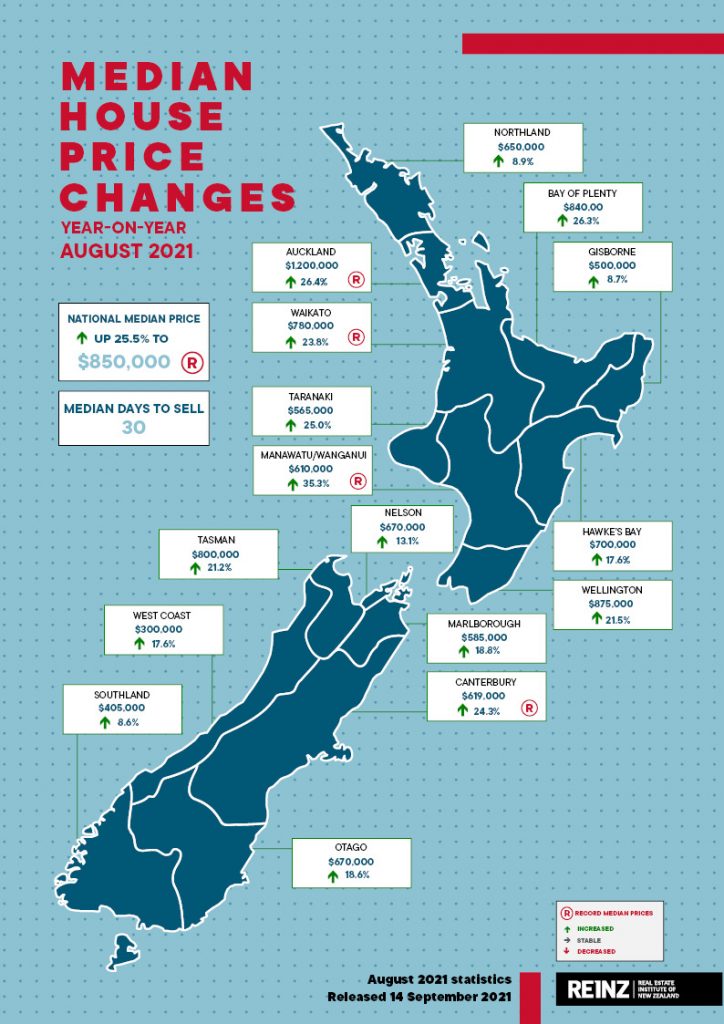 “House prices have once again risen across the country, with every region seeing a year-on-year increase from August 2020,” says REINZ Chief Executive, Jen Baird.

“This latest lockdown has not dampened demand for, or confidence in, the housing market as we saw in early 2020. We have heard from across the industry that prices achieved on sales completed in the early part of this lockdown continue to illustrate an ongoing excess of demand over supply; prices are still rising.”

“Our offices south of Auckland are reporting strong buyer interest and great prices since operating under Level 2. Given the current lockdown uncertainty and the prospect of interest rates going up, this spring could prove stronger than the coming summer.”

Under Level 2, Century 21’s franchises across the Waikato report a rush of listings going live and busy open homes – albeit with strict public health requirements in place including limits on the number of people, contact tracing, and mask wearing.

“When it arrives, Level 3 will make a big difference for Auckland. Although it will take an appointment, Auckland buyers will at least be able to view properties in person.

“My advice to Aucklanders set to sell: Use this lockdown to prepare your property, so you’re out of the blocks when the buyers are.”

Baird points out that this is the time of year that people start to prepare their property for the usual increase in spring sales activity, and it is expected that this will be stronger this year as listing is delayed as a result of lockdown.

“We understand that vendors have been preparing their properties for market, to list once we reach a lower alert level – we expect to see the result of this in our September data,” says Baird.

Number of sales decreases across most of New Zealand

The number of residential properties sold in August across New Zealand decreased by 26.5% when compared to the same time last year (from 7,828 to 5,753) – this was the fewest properties sold for an August month since 2014.

For New Zealand excluding Auckland, the number of properties sold in August decreased by 33.7% when compared to the same time last year (from 5,139 to 3,407) – again, the fewest in August since 2014.

Although lockdown had an impact on sales processes and buyers’ ability to physically view property in the final two weeks of August – the average number of sales made each day during the Alert Level 4 period decreased 24.0% from an average of 208 properties per day pre-lockdown (1 August – 17 August), to 158 properties per day during lockdown (18 August – 31 August). This is testament to the investment made by real estate firms in technology and new ways of working in the aftermath of the 2020 outbreak.

In Auckland, the number of properties sold in August decreased by 12.8% year-on-year (from 2,689 to 2,346). This is a smaller decrease than that of New Zealand as a whole, indicating that the multiple lockdowns Auckland has experienced over the last 18 months may have set the region up well to deal with changes in alert levels, and buyers remained confident.

However, if Alert Level 4 continues in Auckland for much longer, we are likely to see a further drop in this activity through September. While the number of properties sold across Auckland in August was fewer than in 2020, it was still higher than what we saw in 2016, 2017, 2018 and 2019.

Regions with the biggest annual percentage decrease in sales volumes were:

“The ability and confidence of people to buy and sell property within the alert level restrictions appears to differ across the country, which is reflected in the number of properties sold in each of the regions,” says Baird.

“Real estate agents have been through all of this before and are comfortable using digital solutions for much of the process, but we are hearing that some vendors and purchasers are less comfortable online, have less access to technology, and in some areas, poor connections, meaning they would prefer to wait until restrictions are lifted.

“For regions where connectivity rates are high, and where there have been at higher alert levels more often, we have seen a lower impact on the number of properties sold.”

Baird says it was expected the number of sales would be lower. While this is largely down to the restrictions that were put in place from a lockdown perspective, she says New Zealand continues to have record low levels of inventory, meaning fewer properties available to buy.

“The record low levels of inventory were not a surprise this month,” says Baird.

“Although we normally experience a lift in listings in Spring, this has been delayed by lockdown as vendors are generally opting to prepare their properties now to launch at a lower alert level.

“This delay in new listings, coming off the back of record low levels of inventory in July, has meant a lower August than we anticipated.”

Bay of Plenty, Canterbury, Nelson, Taranaki and the West Coast all experienced their lowest levels of inventory in August 2021.

The REINZ House Price Index (HPI) for New Zealand, which measures the changing value of property in the market, again increased 31.1% year-on-year to 4,012 a new high on the index. This was the highest annual percentage increase in the HPI we’ve seen since records began and is the fifteenth consecutive month we’ve seen a new high.

This is the first time the New Zealand HPI has exceeded 4,000, meaning property values have increased more than 300% since the index began in 2003.

The HPI for New Zealand excluding Auckland showed house price values increased 33.8% from August 2020 to 4,033 in August 2021, a new high on the index and the highest percentage increase since records began.

“The strength of the market sees the REINZ House Price Index reach a new high nationally. Nine of the 12 regions across New Zealand reached a record level in August, showing that the underlying value of property is holding strong,” continues Baird.

Auckland’s house price values increased 27.9% year-on-year to 3,985 a new record high. Taranaki, Otago and Southland were the only regions to not reach a new high on the REINZ House Price Index in August.

Median days to sell lowest for an August month since 2016

Seven regions across the country had a median number of days to sell of 30 or less.

“We would expect the median days to sell a property will increase in the coming month as we see the roll-on effect of lockdown and delayed sales,” states Baird.

Properties in Taranaki have sold at the fastest rate of any region in New Zealand, with the median number of days to sell at 26.

Auctions rooms may have gone quiet when Alert Level 4 came into effect, but the latest data indicates that this just meant a shift to the digital space, as August 2021 saw 26.0% of all properties sold by auction. This was the highest percentage of New Zealand homes sold by auction for an August month since records began.

“Auctions have been a popular method of sale for some time now, with August being no different. Conducting an auction is a great way to understand the value of a property in a fast-moving market, and even with August being in Alert Level 4 lockdown for half the month, auctions still made up more than a quarter of all sales,” says Baird.

“Solutions have been found to running effective auctions online which has meant vendors have been able to continue their sales process and buyers have not lost any of the transparency an auction affords,” continues Baird.

New Zealand excluding Auckland saw 16.7% of properties sold by auction, up from 8.2% in August last year – the highest percentage of auctions for an August month since records began.

Canterbury was in third place with 28.0% (222 properties) sold by auction – up from 13.8% (144 properties) in August last year. This was the highest percentage of auction sales in an August month for the region since records began. 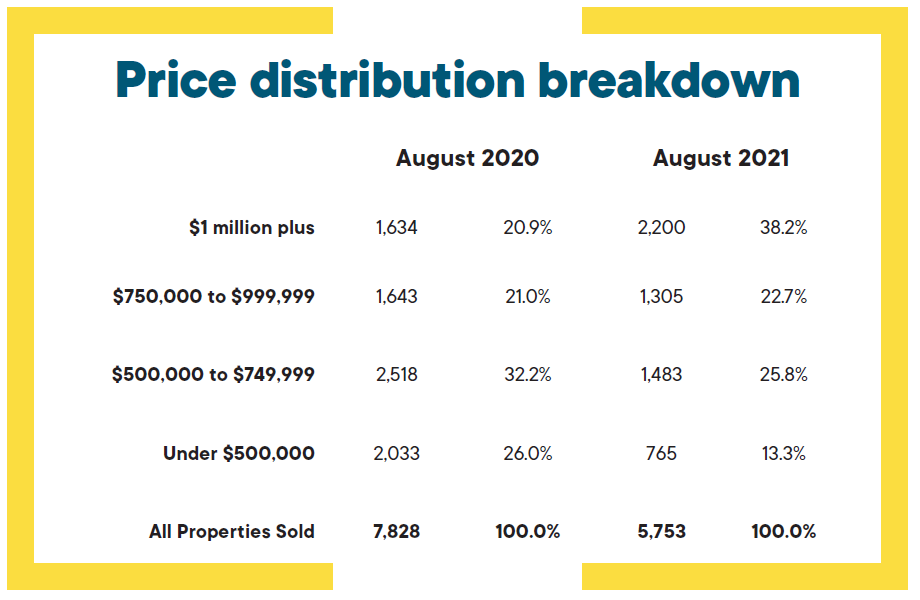