The unrelenting pace of property sales continued in February, with a 14.6% uplift on sales volumes compared to the same time last year according to the latest data from the Real Estate Institute of New Zealand (REINZ) 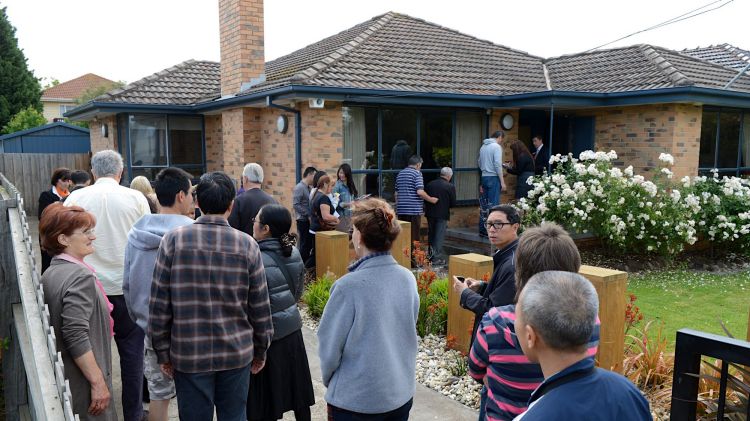 In February, 9 out of 16 regions saw annual increases in sales volumes. Regions with the biggest increases were:

“It’s highly likely that some of this uplift can be attributed to both investors and owner-occupiers looking to purchase ahead of the LVR restrictions coming back into effect in March and the slight uplift in listings we’ve seen over the last couple of months,” REINZ Chief Executive Bindi Norwell says.

Century 21 New Zealand Owner agrees that the February surge was partly due to restrictions on loan-to-value ratios (LVRs) returning and some lift in listings nationwide, but says it’s by no means the last of the summer wine.

“First-home buyers are still keen to make the most of record-low interest rates and investors are keen to beat the 40% deposit requirement from 1 May and any other handbrakes the Government might introduce,” she says.

“As long as interest rates remain low, rents stay high, and other investment opportunities look less appealing, the allure of property will continue for owner-occupiers and landlords alike,” says Mayne.

Even with LVRs coming back into effect in March, REINZ expects to see sales volumes continue at a solid pace over the next couple of months; but Norwell says this will in part rely on a steady stream of new listings coming onto the market.

Mayne says March is already looking good, but it will really rely on more listings.

“We know that if we can get the listings, we can definitely turn them into great sales. The market is holding up really well with demand for housing still incredibly strong.” 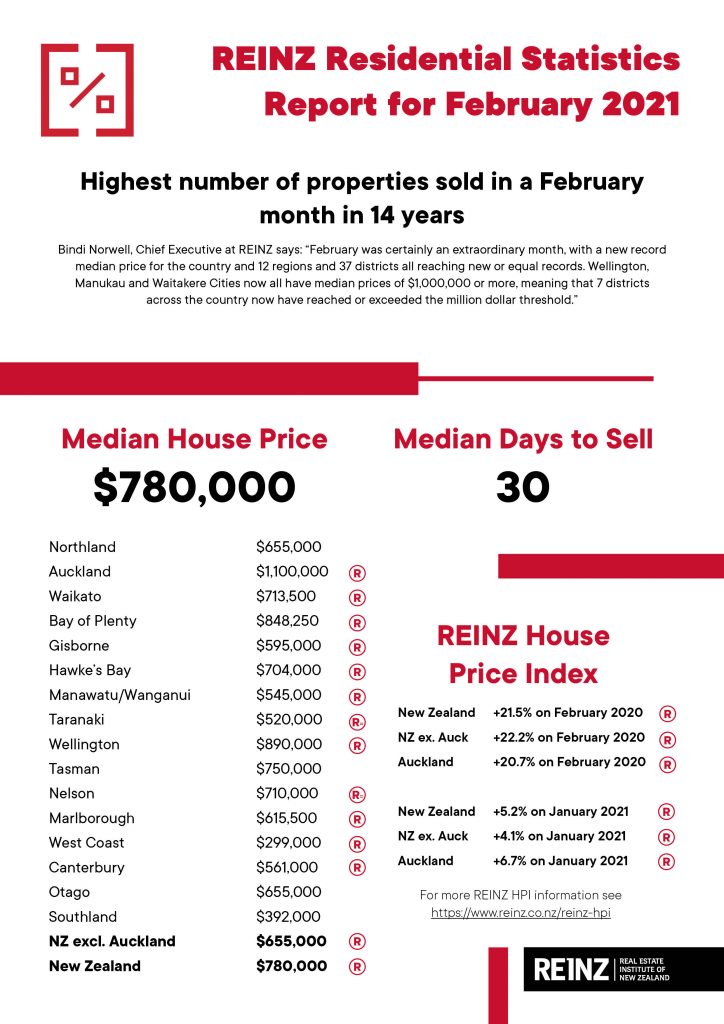 “Wellington, Manukau and Waitakere Cities now all have median prices of $1,000,000 or more, meaning that 7 districts across the country now have reached or exceeded the million dollar threshold,” says Norwell.

“It’s likely that February’s housing data will make very difficult reading for the thousands of renters and first home buyers who are one day hoping to be able to purchase a property. Hopefully the re-introduction of the LVRs will start to slow down the rate at which prices have been rising, and that the market will stabilise in due course.

“Now more than ever, we need our political parties to work together and to work closely with key industry players in order to start addressing the unaffordability issues and to address the housing shortages the country faces,” continues Norwell.

“For a number of months now, REINZ has been calling on the Government to review the First Home Loan Scheme as the percentage of properties eligible for this Scheme continues to fall. In Auckland alone, less than 20% of properties sold would be eligible for support, showing just how out of reach the programme is with where house prices have now moved to,” concludes Norwell. The REINZ House Price Index (HPI) for New Zealand, which measures the changing value of property in the market, increased 21.5% year-on-year to 3,657 a new high on the index. This is the first time the index has exceeded the 3,500 mark and was the highest annual percentage increase in the HPI that we’ve seen in 201 months (May 2004) showing just how strong the market was in February.

The HPI for New Zealand excluding Auckland showed house price values increased 22.2% from February 2020 to 3,653 in February 2021 a new high on the index and the highest percentage increase in 199 months (July 2004).

Auckland’s house price values increased 20.7% year-on-year to 3,662 meaning house values in the City of Sails have increased by more than 260% since 2003 when the index base level was set.

Additionally, every region reached a new high on the index.

In February, Gisborne/Hawke’s Bay again had the highest annual growth rate in house price values with a 30.1% increase to a new record index level of 4,110. In second place was Manawatu/Wanganui with a 29.4% increase and in third place was Wellington with a 29.2% annual increase in house price values. Both Manawatu/Wanganui and Wellington’s increases were the largest HPI movement for the respective regions on record.

In February, the median number of days to sell a property nationally decreased 6 days from 36 to 30 when compared to February 2020, the lowest for a February month in 17 years.

For New Zealand excluding Auckland, the median days to sell decreased by 5 days from 34 to 29, the lowest for a February month in 17 years.

Auckland saw the median number of days to sell a property decrease by 5 days from 39 to 34, the lowest for the month of February in 6 years.

More than half the country (10 regions) had a median number of days to sell of less than 30 – the first time in we’ve seen this in a February month since records began.

Properties in Taranaki have sold at their fastest rate of any region with the median number of days to sell at 21 compared to 25 in February 2020.

Northland had the highest days to sell of any region at 47 days, albeit down from 60 days at the same time last year and the lowest February month for 14 years. February saw nearly a third of all properties sold by auction (29.2%), with 2,322 properties selling under the hammer – up from 16.4% at the same time last year, when 1,139 properties were sold via auction. This was the highest percentage of auctions we’ve ever seen in New Zealand.

Gisborne had the highest percentage of auctions across the country with 70.3% (45 properties) sold under the hammer, down from 75.6% (59 properties) in February 2020.

In third place was Auckland with 47.0% (1,303 properties) sold under the hammer up from 31.3% in February 2020 (645 properties). This was the highest percentage of auctions in a February month since records on sales methods began.

Also of note was Northland with 19.7% (46 properties) sold under the hammer, up from 6.3% (12 properties) at the same time last year. This is the first time ever that the percentage of auctions in Northland reached double digits.

Only Gisborne saw an annual increase in inventory levels, with a 19.8% increase on the same time last year (from 86 to 103 properties).

Manawatu/Wanganui had the lowest level of inventory in the country at 6 weeks, followed by Wellington in with 7 weeks’ inventory.

In third equal place were Waikato, Bay of Plenty and Nelson – all with 8 weeks’ inventory.

Share. Twitter Facebook Google+ LinkedIn Email
Previous ArticleProperty owners urged to do all the checks to avoid the traps
Next Article Christchurch earthquake: Five lessons in construction after a decade of analysis