September’s house price dip may have just been an anomaly as New Zealand’s median house price shot back up by $100,000 in October, REINZ data finds 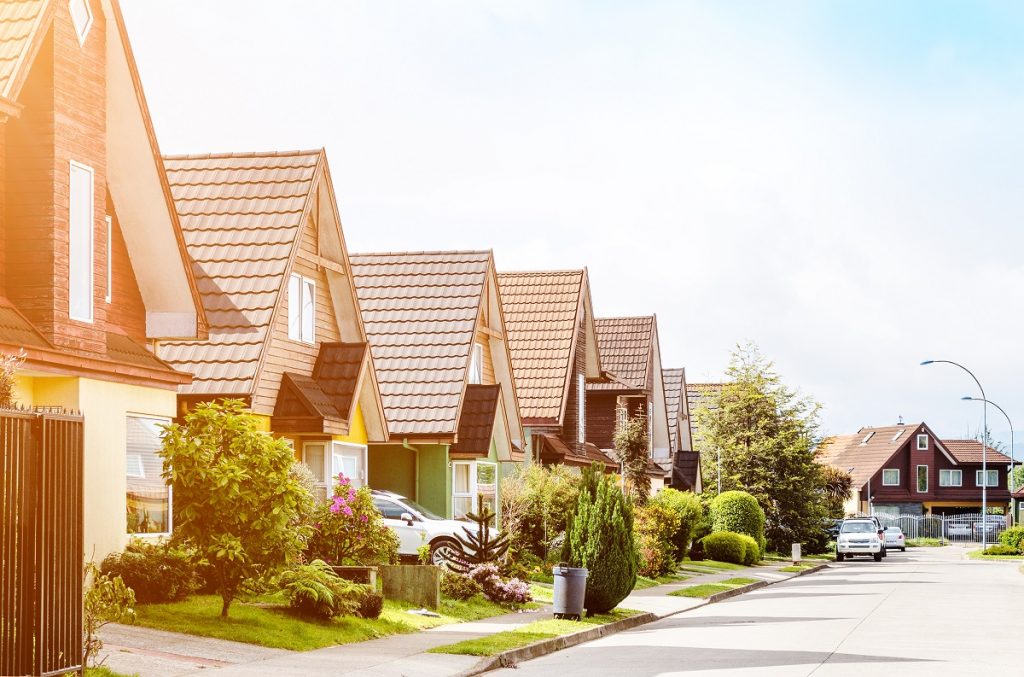 “Despite some officials in Wellington doing their best to talk down the real estate market, it remains incredibly strong with summer now looking decidedly up,” says Century 21 New Zealand Owner Tim Kearins.

His comments follow REINZ releasing its Monthly Property Report for October – a month which saw median house prices across New Zealand increase by 23.4% to $895,000 compared to the same time last year. Ten out of 16 regions reached median price records, and one had an equal price record — the most since March 2021.

“The lack of supply, high demand, and relatively low interest rates continue to drive price increases, with buyer FOMO also contributing to this healthy spring bounce. Let’s just say those who may have been waiting for a price fall have stopped waiting,” says Kearins.

The Century 21 leader says most notably the month-to-month national median house price increased by 3.3%, after it decreased the previous month.

The challenge for the sector now, he says, is to increase listings. The total number of properties available for sale in New Zealand was down by 16.1% compared to October last year, although up from September.

“With it feeling more and more like summer, we will see the number of property listings start to lift. It all bodes well for a strong real estate season, despite the pandemic, lockdowns, and ongoing restrictions,” says Kearins. 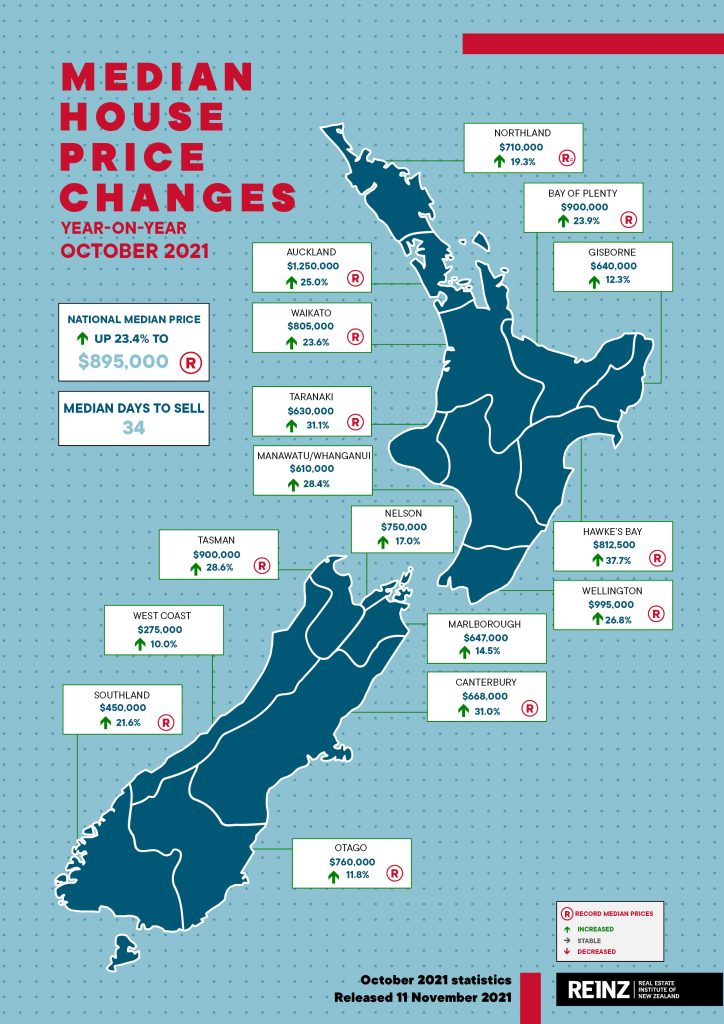 Low listings effecting sales, but still up from September

The number of residential property sales across New Zealand decreased by 21.7% year-on-year, from 9,185 in October 2020 to 7,190 in October 2021. However, there was a significant increase in sales month-on-month — up 30.3% from September (5,518). October’s sales activity shows a market revitalised by easing COVID-19 restrictions, the spring lift and growing confidence in vendors and buyers to make decisions about their housing.

In Auckland, the number of properties sold in October decreased by 20.3% year-on-year (October 2020: 3,234, October 2021: 2,576). The increase month-on-month shows the market’s resilience, with 85.5% more properties sold in October than in September 2021 (1,389). Despite prolonged restrictions, the Auckland market seems to have found its rhythm again. The ability to conduct business remotely and eased restrictions around viewings have enabled real estate continuity, while a general FOMO — fear of missing out – stokes a market that remains strong.

The regions with the greatest annual percentage decrease in sales volumes were:

Jen Baird, Chief Executive at REINZ, says: “October shows a marked increase in sales activity on September and August, boosted by the usual spring uplift. While across New Zealand, sales activity decreased year-on-year by 21.7%, there was a 30.3% increase month-on-month. Auckland saw the most significant uptick in month-on-month sales activity, with 85.5% more properties sold in October than in September 2021. Despite the restraints the market is operating under, this is a stronger than average October month. We’re seeing the continuation of what is a firm market, despite the pandemic.

“Lockdown restrictions are having a reduced impact. Real estate professionals have the resources to conduct business remotely, and customers/clients have the confidence to move forward to make decisions. Steps by the Government — as advocated for by REINZ on behalf of members — to enable more private property viewings at Alert Level 3, for example, have helped – especially in areas longest affected by tighter lockdown. Less stringent restrictions equate to more activity.

“Comparing listing and sales activity over this lockdown to the country’s first one in 2020, shows a sharp difference. Namely, the impact has not been so severe, and the recovery has been quicker.

“October is the beneficiary of increased listings in the month prior. It is expected that sales activity across New Zealand will continue to rise in the coming months, as restrictions ease further, travel limitations lift and those who previously held back listing their property do so. The demand is certainly there,” Baird observes.

Ten out of 16 regions reached median price records, and one had an equal price record — the most since March 2021. The number of price records is above average for an October month, reflecting a firm market reinforced by continued demand.

Other regions that reached record median prices in October were:

“The same factors continue to drive price increases — supply, demand and relatively low interest rates. There is also a sense of FOMO driving buyers for now. Median prices for residential property across New Zealand increased by 23.4% to $895,000 in October 2021, and 10 of 16 regions reached median price records — the most since March 2021,” Baird says.

“House prices continue to show steady growth. Government measures to temper investor demand and recent moves by the Reserve Bank to increase OCR are causing headwinds for house prices. However, the long-term impacts are yet to be seen. We saw the initial lockdown impact on the market in August and September, with market activity slowing. However, October data announces the arrival of spring activity,” Baird notes.

The REINZ House Price Index (HPI) for New Zealand, which measures the changing value of property in the market, showed an increase of 29.9% year-on-year to 4,206 – reaching a new high on the index. This is the fifteenth consecutive month we have seen a new high.

Manawatu-Wanganui has had the top year-on-year movement in HPI of all the regions for six months in a row. In October 2021, the region had the highest annual growth rate in house price values with a record index level of 5,306 – a 42.6% increase year-on-year. Canterbury (+38.0%) and Waikato (+34.1%) had their largest year-on-year increase in HPI since records began.

In October, Northland, Southland and Gisborne/Hawke’s Bay were the only regions not to reach new highs on the REINZ House Price Index. For seven months in a row, Southland has had the lowest or second-lowest year-on-year movement in HPI of all the regions.

“Auckland saw a marked increase in its median number of days to sell, equally it saw an increase in sales. While restrictions have relaxed a little in the region, under Alert Level 3 open homes are not permitted. So, while the volume of activity is there, it is spread out over time — which means the sales process takes longer. Overall, 10 regions had a median days to sell of less or equal to 30 days, the most since April 2021. Properties are selling, and fast,” states Baird.

Gisborne again had the highest percentage of auctions across the country, with 48.2% of properties selling by auction (27). However, this was down from 73.4% (47) at the same time last year.

“We’re seeing a profession-wide step towards auctions, and they are largely now an expected part of the conversation with vendors. In an uncertain market, auctions are a great way to understand a property’s value by letting the market decide. Vendors want market price with a fixed date and a transparent sales process,” says Baird.

“There remains a demand vs supply imbalance. Despite recent restrictions, this imbalance continues to drive strong levels of activity and the resulting price growth. While inventory levels were down year-on-year, we have seen a 13.5% increase when compared to September 2021 (13,407), which is great news for buyers,” Baird says.

“The Government has announced urban development rules that increase the ability to freely build medium density residential dwellings to increase housing supply. These changes will take time to deliver but may create more choices for buyers at different price points,” she concludes.