New build office development activity is ramping up in Auckland, Wellington and Christchurch, but Colliers investigates whether now is the best time to proceed

Development plans are being readied and cranes are popping up on the skylines of our major cities to build new premier office space. This is despite some reservations circling about the future of office arising from Covid-19’s acceleration of remote working and the potential influence on the demand for office space over the long term.
However, a review of market conditions in Auckland, Wellington and Christchurch highlight that while some changes to future demand levels may be likely, there are key reasons why pushing ahead with new development activity stacks up.

Not all office space is the same
Whilst there is no doubt that flexible working practices are here to stay, businesses have identified the crucial role that the office plays in promoting collaboration, innovation, creativity and productivity and it strongly supports the building of company culture.

However, all of these outcomes are not achievable in all types of office accommodation. These features typically work best when the office space provides a high-quality working environment, is structurally safe, and is attractive to employees, for more than just the workspace it provides.
In the current market conditions, ‘earning the commute’ of employees is at the forefront of consideration, along with flexibility, health and wellbeing, environmental sustainability, and seismic resilience.

Seemingly, obsolescence in existing office space has accelerated, alongside the demand for a quality in office space of which is increasingly in limited supply. And this is not just anecdotal, it is apparent in our latest research data.

In Auckland’s CBD, the prime grade (A grade and Premium Grade) vacancy rate sits at 7.3%, approximately half of that seen within the secondary sector (14.1%), and this is down from previous cyclical highs. The variation is also clear within the Auckland metropolitan market where A grade vacancy is currently 5.3% versus 8.8% within B grade or lower graded buildings.
In Wellington, the variation is greater still with the prime grade vacancy rate at just 1.1%, while 7.8% of the secondary stock is vacant.

In Christchurch, where much of the CBD office stock has been rebuilt, the vacancy rate (including sublease space) has reached a two-decade low of 9.7%, and well down from 14.7% recorded in 2020. In the Core and West End precincts, which comprises approximately 60% of total stock, the vacancy rate has declined to 8.6% and 7.1% respectively.

Wellington’s development requirement
As vacancy figures illustrate, pressure on prime grade office space in the capital is particularly intense. This reflects the fact that, by comparison with other major Australasian centres, the proportion of office stock classified as prime space is low. The development pipeline has been limited while the shortage of space has been exacerbated by the removal of stock due to earthquake damage and other seismic concerns.

Wellington has approximately 1.4 million sqm of office space. Of this total, just 22% is classified as prime grade office space. By comparison, the proportion of prime grade buildings is 47% in Auckland’s CBD, 62% in Sydney and 70% in Melbourne.

As stated above, the supply of prime grade space has been hampered by seismic issues. Buildings such as StatsNZ House and the BNZ building have been permanently removed from the city’s inventory while, more recently, Asteron House and the Meridian Building have been vacated while strengthening works are carried out. The Ministry of Education has also recently been forced to vacate their premises.

Therefore, market demand for additional high grade office space within the city is clear. The development sector is responding to the demand with approximately 80,500 sqm of new buildings currently under construction including the 20,000 sqm Defence Force House and BNZ’s new headquarters at 1 Whitmore Street. Plans for Willis Bond’s latest development at 110 Jervois Quay have also been recently released with marketing underway. Upon completion of the current pipeline this will increase the prime grade sector’s share of total inventory to around 30%. This, however, remains well under that seen in other major centres. 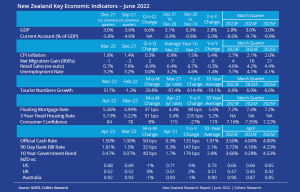 Auckland prime locations in demand
While higher than Wellington’s, the proportion of prime grade space within Auckland’s CBD remains below that of the major Australian cities. Limited options and the desire from businesses and employees for better space will underpin the long-term demand for new office space and drive development activity.

Over the five-year period between December 2016 and December 2021, an additional 153,450 sqm of prime grade space was added to the CBD’s total stock. Development has, in recent years, centred upon areas which provide strong tenant appeal, primarily the core and waterfront precincts. However, the future provides a number of existing and new spots for contention.

The opening of the new Central Rail Link (CRL) stations at Aotea and Karangahape Road, scheduled for 2024/2025, will increase the appeal of surrounding areas to business given the ease of access for employees. Plans are already well advanced for large scale development above Te Wai Horotiu Aotea station, to include a substantial proportion of office premises.

Mansons TCLM’s development of some 29,000 sqm of space at 50 Albert Street is also underway, along with potential development plans at 5 Albert Street. Mansons plans for more office space in the Wynyard quarter along with Precinct Properties’ new Wynyard Quayside developments are all adding to better working environments that are being demanded by businesses and their employees.

The potential implication for rents
Increases to construction costs, delivery timeframe uncertainty, hybrid workings and rising interest rates, as well as the competition for limited land availability in prime spots, are all having a profound impact on demand expectations, values and development feasibility. However, there is currently upward pressure on end rentals.
While demand and the ability to command higher rentals may be disrupted if economic conditions worsen dramatically over the short-term, long term fundamentals and market constraints point to higher rents.

New build net face office rentals in Auckland are approaching $900 per sqm, in Wellington gross face rents are at similar levels, while Christchurch could see new build rents pushing $500 per sqm or more in the near future.
Although these rates sit above current average prime rental levels, rising demand for better quality space, market constraints and rising inflation all point towards rising rents and be a necessary outcome for occupiers meeting the needs of their business for the future.