As the downturn sets in, and with interest rates set to rise further, greater consideration is now being given to ‘how long and how far will this go’, CoreLogic NZ Head of Research Nick Goodall says 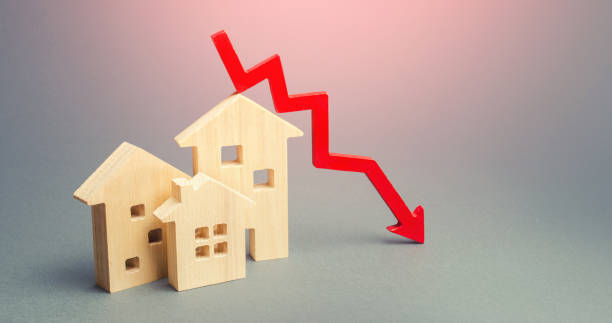 CoreLogic’s House Price Index found property values fell a further -0.8% in June, completing a hat-trick of months at the same rate of decline (-0.8% in both April and May).

The quarterly fall of -2.3% is the biggest drop over a three month period since February 2009, which is just prior to when the market bottomed out (at an average value of $372,681 in March 2009) following the Global Financial Crisis (GFC).

The long recovery after the GFC offers a glimpse into one potential scenario which could unfold.

The experience then took the shape of a bathtub – a gradual initial decline of -9.9% over 17 months, followed by a period of relatively flat conditions or essentially a  plateau, before eventually increasing back to the pre-GFC peak five years later.

While the economic and lending environments are remarkably different between 2008 and 2022, housing affordability is more thinly stretched, and interest rates are rising, not falling like in the late 2000s. Under these circumstances it is difficult to foresee any respite for falling house prices in the near term.

Affordability constraints coupled with higher interest rates and tighter lending conditions are likely to keep a lid on housing demand over the coming months and probably until interest rates start to fall again. Although a drop in housing prices will support an improvement in affordability, higher mortgage costs and stricter lending policies will probably outweigh the renewed affordability advantage. 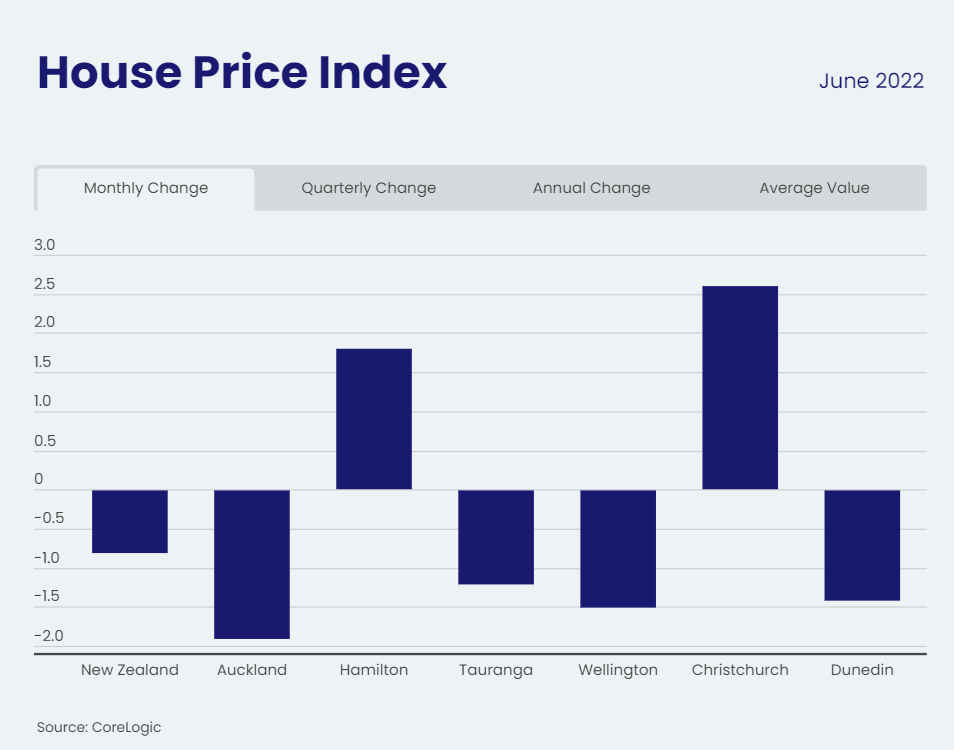 A trend towards lower housing prices was evident across each of the main centres except Christchurch, where housing affordability relative to income is still favourable. Auckland (-1.9%) saw the largest falls in value through June, which is also reflected in the worst quarterly fall of -4.9%.

When it comes to property values in Auckland, it’s important to look past median sale prices as they are often affected by a change in the mix of properties reaching agreement over the two periods being analysed, whereas an index measures all properties in an area regardless of whether they have transacted. In other words, Auckland could see more expensive standalone dwellings dominating sales in a given month, but then cheaper townhouses might take over the next month.

Values in Hamilton bounced up 1.8% in June, but remain down -1.2% over the last three months.

Meanwhile in both Wellington and Dunedin, larger and more persistent falls in housing prices have dragged annual growth rates to 5% or lower – evidence that the last flumes of growth at the end of last year are now being extinguished.

Delving into the expectations and mindset of two of the key market players provides greater insight into the prospects of the market for 2022 and beyond.

On top of the affordability constraints already mentioned, for those already in the market, they’re now having to deal with the increased costs of higher interest rates.

Those rates are rising quickly, as if scaling the steepest parts of Mt Ruapehu. But while the lending environment, including the tightest LVR limits on record for owner occupiers, is likely to keep a lid on demand for property at 2021 prices and lead to further, gradual falls in values, there are a number of guardrails in place which should protect the market from an outright crash in values.

Firstly, and probably most importantly, the tight labour market and historically low unemployment rate are expected to remain. As long as borrowers can retain their jobs and income they’re likely to adjust their discretionary spend in order to maintain mortgage repayments. This is as opposed to mortgage stress leading to heavily discounted or worst-case mortgagee sales.

Mortgage serviceability tests applied at the time of origination, alongside many borrowers getting ahead of their repayment schedules will provide another buffer against potential trouble too.

For many owners, the 20% deposit requirement and exceptional recent capital growth will also ensure a relatively sizeable chunk of equity in their home thus reducing the chance of being in a negative equity position, even with further value falls to come.

Therefore there are plenty of reasons why housing demand will remain constrained but not necessarily a lift in supply. So if owner occupiers are unlikely to be the saviour of the market, but equally not the villain, who could have a greater influence?

For investors, facing a more heavily regulated market, similar affordability pressures to owner occupiers and the full force of inflationary pressures, the finances are becoming harder and harder to stack up.

Given the hurdles to acquire funding such as lending limits are higher, the cost of money (mortgage interest rates) is increasing and the cost of housing such as values, maintenance costs and reduced tax benefits is also high, many investors (or would-be investors) simply won’t be able to justify adding a property to their portfolio. Some investors may be comfortable ‘topping up’ their property out of other income for a period of time, but that has a limit.

Furthermore, if we do indeed see a ‘bathtub’ shaped recovery play out, expectations of short term capital growth should also be tempered, leaving investors focused on a long-term horizon, and/or on short term yield.

Arguably longer term capital gain prospects may be less than what investors have become accustomed to historically. A recent Infometrics report forecasted the average annual growth rate of house price appreciation for the next 25 years to be 3.1% p.a. For context the lowest 25 year average from the last 70 years was 6.4% (1988-2013).

When it comes to yield on investment, increasing rental payments may have helped keep up with some of the rising costs of investment property ownership, however it’s likely the rate of rental growth will drift back from over 6% towards the long term average of 3-4% p.a.

Increasing supply, partly due to unsold stock hitting the rental market, alongside reduced demand due to outward migration and affordability pressures limiting how much more tenants can pay could all lead to a tenants market later in the year.

Once again we’re left with a situation where it’s difficult to see much demand for investment property in the near future, however that has been the case for a few months now and over April and May a total of 23% of property purchases still went to investors who had to secure funding from the bank.

While this is down from the recent peak of 29%, CoreLogic Buyer Classification data shows they’re still out there. Perhaps they’re still well capitalised, have an eye for value and are wary of alternative investment options. Whatever it is, not all investors are shying away in the more difficult times.

From a supply perspective, there’s also been no rush to the exit from investors, despite a fair amount of postulation after such direct targeting from the Government and Reserve Bank. Listings are higher than in the last two years, however this is due to properties selling more slowly, increasing stock levels, not an increased flow of properties being listed each week.

Perhaps some investors, as they approach their bright-line date (five years for many, ten years for recent entrants) will look to sell, thus avoiding a larger capital gains tax, but for now, they’ve been holding on.

Similar to owner occupiers then, the outlook for investment demand looks limited and this will reduce the chance of an upcoming bounce back in values, but a more aggressive fall away in values also seems less likely as the long term appeal, perceived lack of alternatives and the good ol’ Kiwi obsession with investment property remains.

Outside the main cities there are very few areas showing any consistent growth. Those with monthly growth are generally down over the last three months (Whanganui and Hastings), while those with lingering shoots of growth over the quarter (New Plymouth, Whangārei and Queenstown) are showing more recent weakness.

The wider Wellington region as well as Palmerston North a bit further up the line, have experienced more persistent value weakness, with annual rates of growth in these areas falling to 5.3% or lower. Quarterly falls of more than 6% in both Lower Hutt and Upper Hutt illustrate a swiftly turning market.