A total of 6,645 planned and ongoing construction projects by the world’s megacities valued at US$4.2trn are sparking interest in residential and infrastructural developments, according to GlobalData 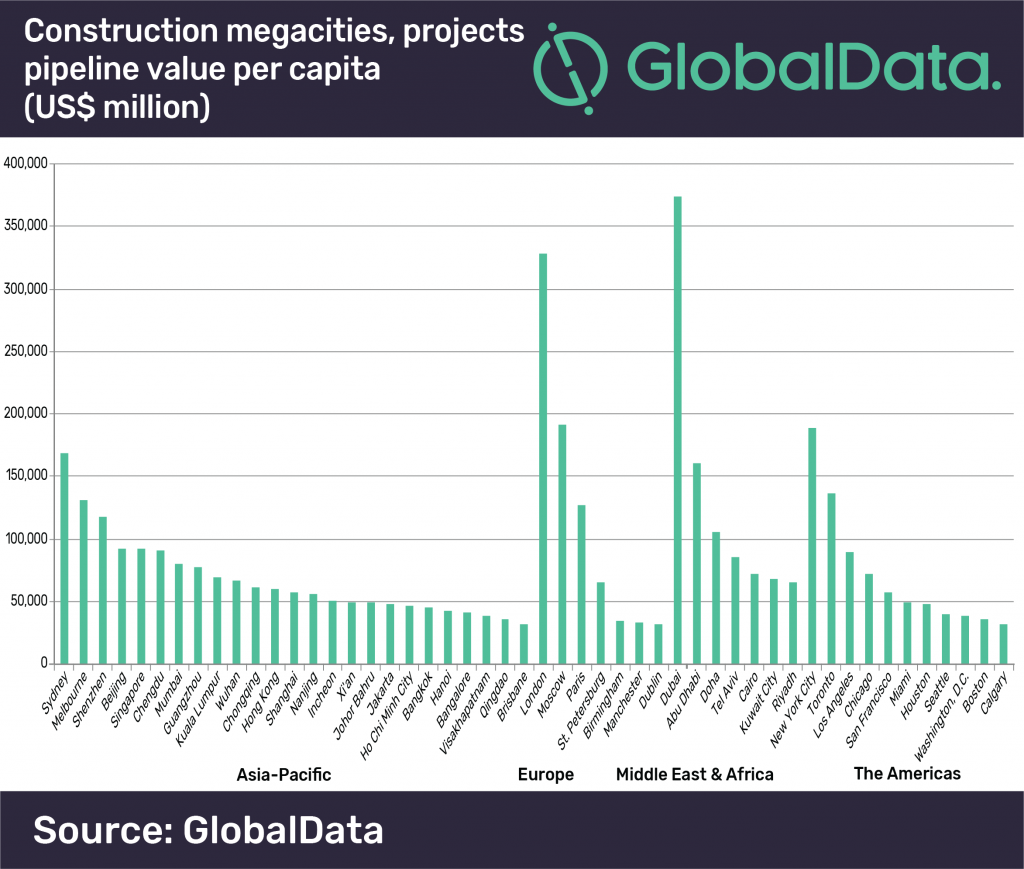 The United Nations predicts that, between 2016 and 2030, the percentage of the world’s population living in cities with at least a million inhabitants is likely to grow from 23% to 27%, and the number of megacities is projected to increase from 31 to 41.

Following a recent assessment of project pipelines in major cities worldwide by leading data and analytics company, GlobalData, a listing of 50 ‘Construction Mega Cities’, discovers they each have a pipeline of projects with an investment value above US$30bn.

The report states that Dubai tops the list with total project values amounting to US$374.2bn, just ahead of London in second place with US$328.7bn and Moscow in third with US$191.5bn.

However, the Asia-Pacific region dominates the list, accounting for 25 of the 50 cities, and having a combined projects pipeline valued at US$1.7trn.

Yasmine Ghozzi, Economist at GlobalData, comments, “The ranking of Construction Mega Cities in the Gulf states shows they are spending the most on major development projects relative to the size of their populations.

“Dubai, for example, has a population of 3.2m, but it holds the top position in terms of the value of the construction mega-projects pipeline per capita.

“In addition, the number of people living in Doha has increased to 1.1m as the Gulf state recruits tens of thousands of workers to work on major infrastructure projects linked to the 2022 FIFA World Cup; their project pipeline valued at US$105.6bn.”

There are major differences among the 50 Construction Mega Cities in terms of the value of the project pipelines compared to the size of the economies.

Visakhapatnam, one of India’s largest ports and an important industrial town and seaside resort, tops the ranking primarily owing to the government’s push on infrastructure and affordable housing.

Ghozzi continues “The two main cities in Vietnam, Hanoi and Ho Chi Minh City, also feature in the top 10 ranking of cities in terms of the value of the project pipeline in relation to the city’s economy. Ho Chi Minh City’s economy recorded high economic growth in the first six months of 2018, with the construction industry recording growth of 7.7%.