Several years of tightening market conditions across Auckland’s CBD and metropolitan office markets led to a ramping up of development activity that was projected to last over the next few years. However, this expectation has changed in a post COVID-19 world, says Colliers’ report At the end of 2019, vacancy within the CBD had fallen to a historic low of 4.7% while across the metropolitan markets the overall rate was just 5.6%. the reduction in the metropolitan vacancy rate was achieved despite approximately 28,000 sq m of new space developed over the previous 12 months.

Within the Auckland CBD, five major projects are currently under construction which will see over 87,000 sq m of new office space being completed prior to the close of 2021. The metropolitan market will see 35,000 sq m of buildings completing over the same time scale. 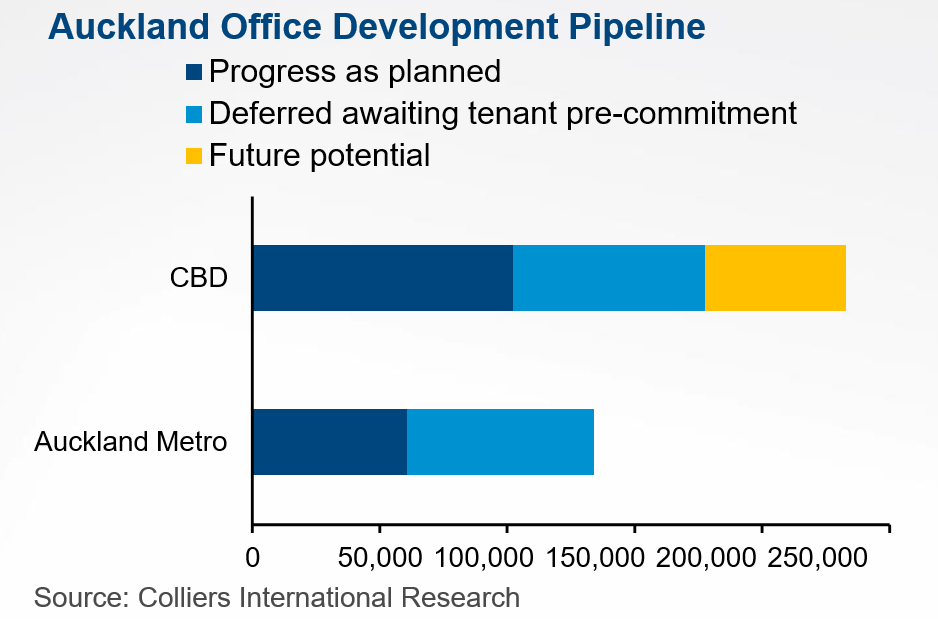 Prior to the onset of the COVID-19 pandemic, it was anticipated that while increases to the inventory would result in an easing of market conditions it would be insufficient to bring about an oversupply in the market. Further, the ongoing increases in demand would continue to encourage development activity.

The above view has tempered with the emergence of COVID-19, the lockdown that this enforced and the significant impact which it has had on the economy. While New Zealand’s successful handling of the virus has allowed large parts of the economy to reopen faster than most had expected, the economy has moved into recession and the unemployment rate is expected to increase to somewhere between 8% and 10%, according to latest economic forecasts.

In addition to the economic implications of the pandemic, it has also resulted in heightened speculation about possible long-term changes in work habits (see our June report for more information).

Question marks over the speed of the economic recovery and the extent to which work habits will change are likely to have an influence on future development conditions. 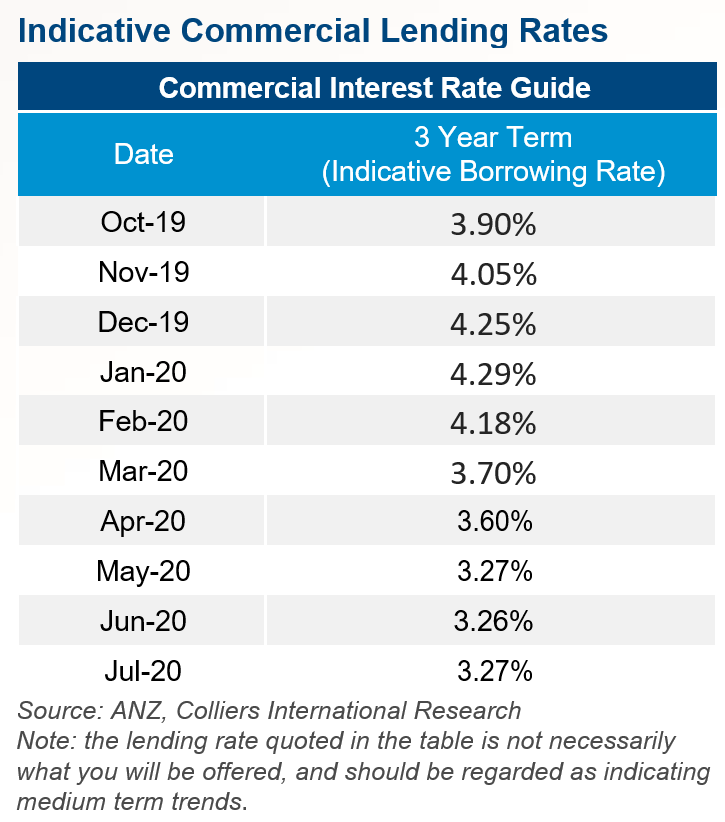 A vast majority of CBD projects currently under construction are close to completion and have high levels of tenant pre-commitment. Therefore, there is no reason to believe that their development will be disrupted. This is true of new build and refurbishment schemes currently underway in the metropolitan market as well.

Therefore, when assessing future supply conditions, changes in the development pipeline are going to play out through the deferment of projects that have yet to move to the construction phase despite having consent, or more likely, schemes that are currently at the planning and feasibility stage.

Over the last five years the strong levels of underlying demand have encouraged developers to adopt a ‘build it and they will come’ attitude with schemes being progressed with the minimal, or in some cases, no leases in place at all, taking a speculatively-led approach.

As a result of the changing market dynamics noted above, Colliers now believes that projects with a potential total floorspace of 75,250 sqm in the CBD and 73,300 sq m in the metropolitan market will not proceed without suitable tenant pre-commitment. It is too early to classify any of these projects as having been abandoned. The pipeline is less certain and the length of delays unknown, however any particular project could move to the construction phase almost immediately should an anchor tenant be identified.

The deferment of projects will clearly act to minimise the increase in vacancy levels which are anticipated as a result of the completion of pipeline projects and the impacts of COVID-19.

Colliers International has modelled the likely demand and supply trends for the period to December 2024 and for further information, interested parties should contact a member of the research division. 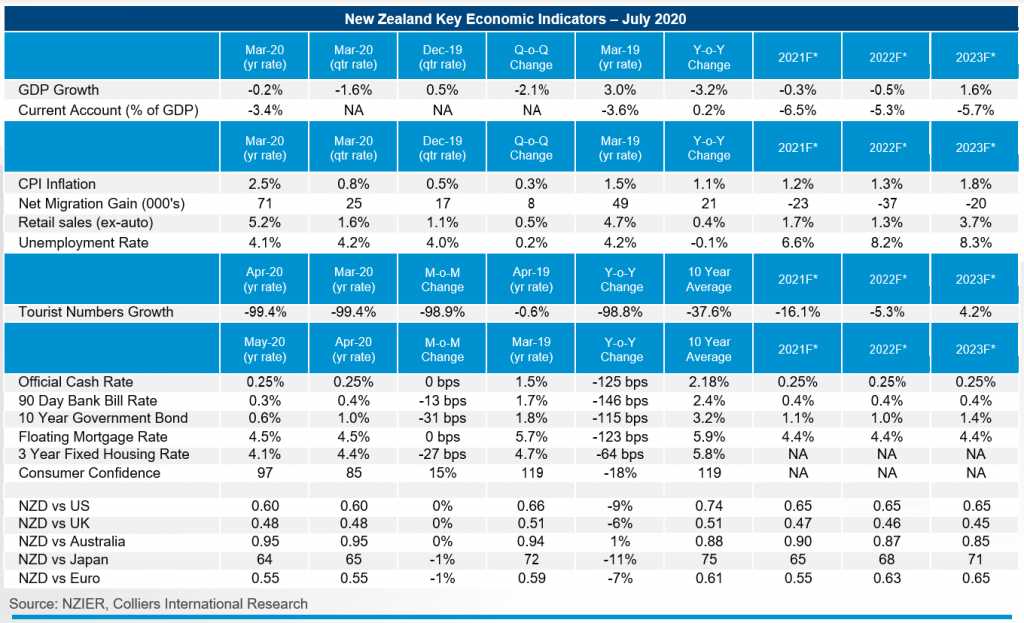 The outlook for rental growth across the Asia Pacific region’s office markets has been impacted by COVID-19. By comparison with many markets across the region, however, Auckland’s prospects appear far more positive than most, according to the findings of our latest research paper – Asia Pacific Real Estate: Still Good Value in a Changed World.

When looking at the short-term future for major cities in the region, only Taipei – and perhaps Tokyo – can expect office rents to stay firm over the remainder of 2020. Auckland’s effective office rents look likely to decline over the year ahead as landlords with vacant space look to offer higher incentives to attract tenants.

However, this could be relatively short-lived. Prospects for rental growth in Auckland are amongst the most positive in the region over the next five years. Singapore with forecast annual average growth of 3.3 per cent leads the way with Melbourne’s projected average growth of 2.9 per cent (the strongest of the Australasian markets) ahead of Auckland at 2.2 per cent and Sydney at 1.9 per cent per annum.

The industrial sector’s strong defensive investment qualities and the perception that it is the sector which will be most resilient during the current economic downturn is supporting buoyant sales activity over recent weeks. Industrial sales reported across the country show prices and yields for prime assets are little changed from rates recorded prior to the onset of COVID-19.

Activity has been driven by a wide range of purchasers including syndicators, high net worth individuals and owner occupiers. One example is the $41 million sale of the Tomoana Food Hub processing and distribution centre on the outskirts of Hastings.

In the Auckland region, a Boundary Road premises in Papakura sold at a yield of just under 5%. Listed property group Argosy has sold its property at 180-202 Hutt Rd, in Wellington to a private local investor for $23.5 million. The Christchurch market has also been active with a Wigram Close property selling to an owner occupier at a sale price of $4.1 million (see back page for more details).

Kiwis returning to the shops following the end of lockdown for some ‘revenge spending’ resulted in a strong recovery in retail spending, according to latest data for electronic card transactions published by Stats NZ. Core retail spending totalled $4.6 billion in May, a 73% increase on April.

The “V-Shaped” rebound is a welcomed indicator of consumer appetite although it also reflects an element of pent-up demand resulting from the lockdown period. As a result, shifting market sentiment and a clearer assessment of COVID-19 impacts on the economy will likely only be seen in the coming months. 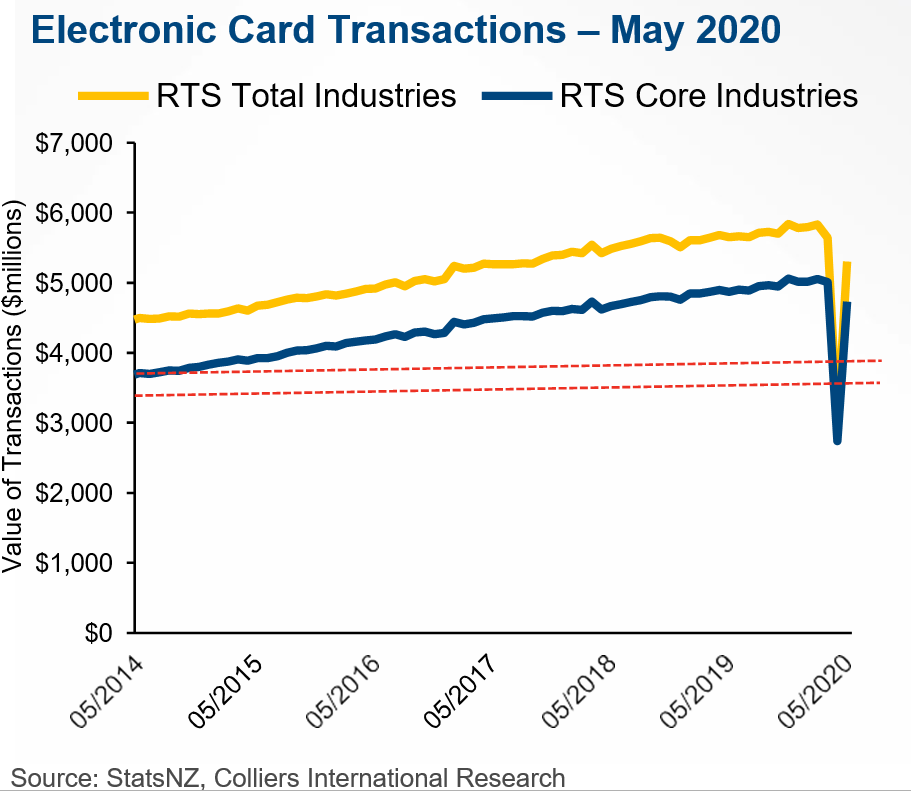