CoreLogic’s Mid-Year Best of the Best review reveals the 2021 property market upswing is happening nationwide, not just in main centres 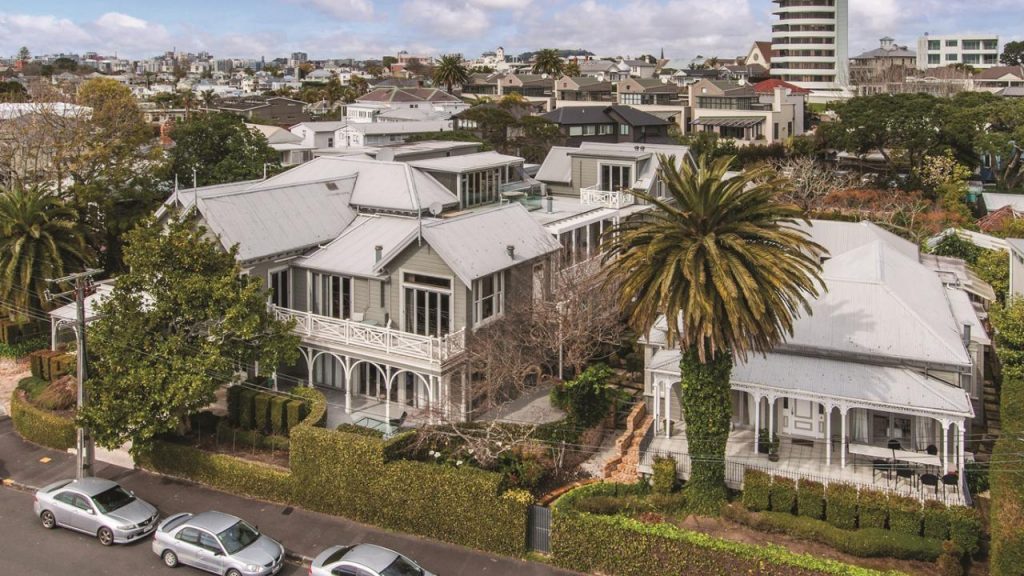 Reflecting better relative affordability and easier access for a wider range of buyers, Manunui in Ruapehu District saw median values rise by 51.8% in the past year (to $295,000).

A ‘provincial’ suburb has also taken the prize as fastest-selling with Hargest in Invercargill boasting a median time on market over the past year of just six days.

“Median values in Otara (Auckland) are up by 31.4% over the past year, Enderley (Hamilton) also cracked 30%, and Wainuiomata (wider Wellington) hit 35.3% growth. The top growth suburbs in Tauranga, Christchurch, and Dunedin were all in the range of 20% to 25%.”

“Would-be home buyers shouldn’t despair, however. Our data also shows a number of suburbs in Christchurch with median property values less than $400,000, consistent with other indicators of our second city’s relative affordability and potential appeal for those thinking of relocating.”

The cheapest suburb across the entire country is Runanga in the Grey District ($167,000), while some suburbs or small towns across the lower South Island have seen increases of less than 5% in the past 12 months – including Wallacetown (Southland), Frankton (Queenstown), Twizel, and Te Anau.

Meanwhile, when it comes to the speed of sale, single-digit days on market have been common for many parts of the country. For example, suburbs in Invercargill, Nelson, Hamilton, Upper Hutt, and Gore have all had median days on the market of fewer than 10 over the past year, while even in the main centres, property has generally been shifting in two to three weeks. The longest time on market across most of the main centres has only been four to five weeks. 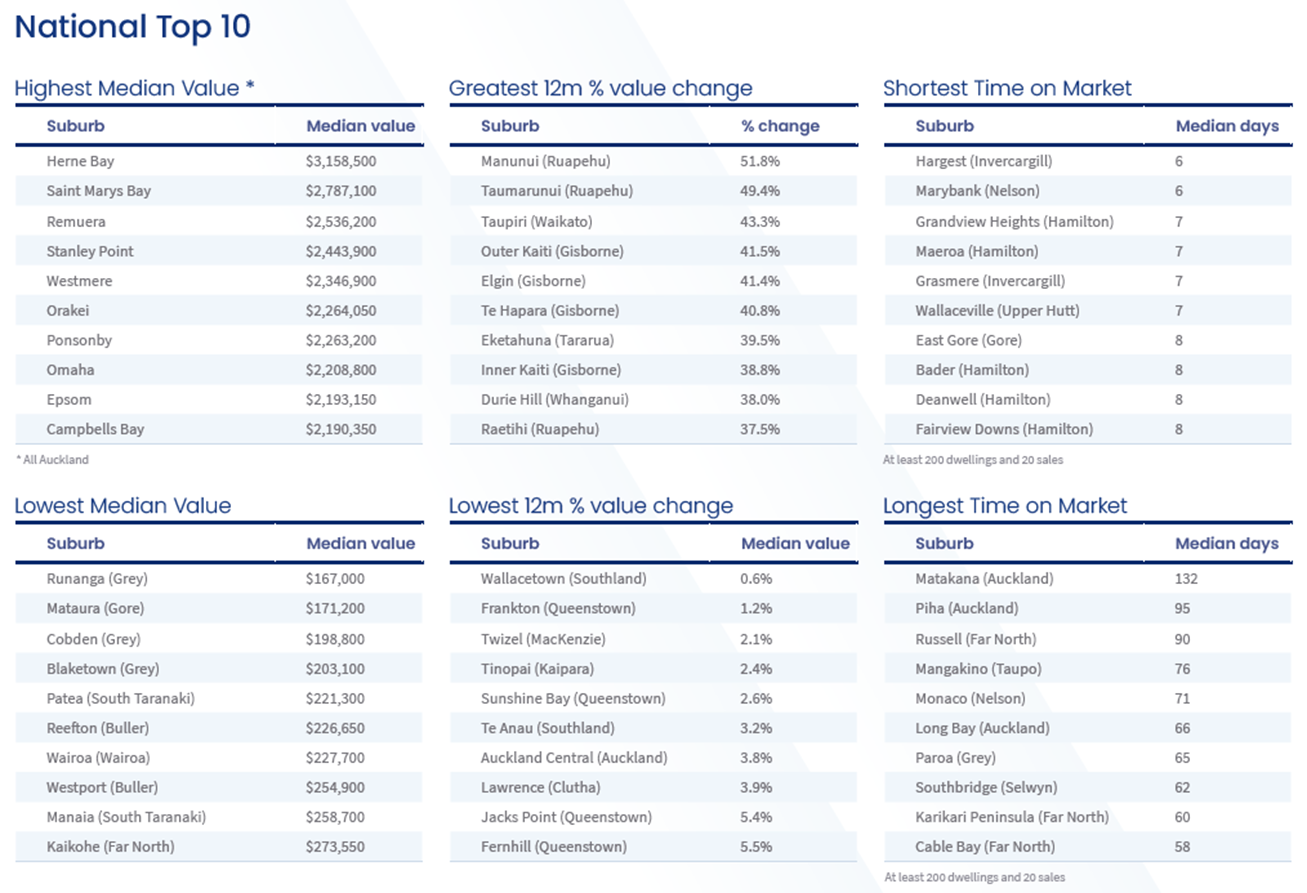 A look outside the main centres

In terms of the highest median values, the ‘Rest of South Island’ (RoSI) top 10 is dominated by Queenstown, with Kelvin Heights on top ($2.03m). The ‘Rest of North Island’ (RoNI) top 10 features suburbs in Thames Coromandel (e.g. Hahei at $1.34m), Western Bay of Plenty, and Napier. By contrast, the West Coast and Southland feature in terms of the RoSI’s areas with the lowest median values, while South Taranaki, Ruapehu, and Far North feature for RoNI.

Looking at the strongest growth around the provinces, a number of suburbs in Ruapehu and Gisborne have seen median values increase by 40% or more in the past 12 months, and although the overall gains have been slower across RoSI markets, Cobden (Grey) has headed the field (25.1%), followed by a number of suburbs across Invercargill and Marlborough. Suburbs that have lagged a little include Tinopai (Kaipara) at a 2.4% rise and Wallacetown (Southland) at 0.6%.

In terms of shortest time on market, the RoSI top 10 is dominated by parts of Nelson and Invercargill, e.g. Marybank and Hargest at six days apiece. Across RoNI, three of the top 10 are represented by suburbs in Palmerston North, including Ashhurst, Takaro, and Westbrook, all with median time to sell over the past year of just eight days. Looking at slower-moving suburbs, the Far North features for RoNI and parts of Buller and Southland for RoSI.

Finally, for top sales, the RoSI top 10 is again dominated by Queenstown, although Tasman also makes an entry. For the RoNI, it’s no surprise to see Hastings (Havelock North) feature, along with Kapiti Coast, Thames-Coromandel, Waikato, and Waipa.

This widespread growth could be explained by the growing acceptance of remote working, which Century 21 New Zealand Owner, Derryn Mayne says have made living in the regions much more achievable.

“Going to a coastal, river or lake property is now more viable as mum, dad or both can often still work if Wi-Fi’s available,” Mayne says.

“Covid has seen more Kiwis exploring their own backyard, but it has also fast-tracked companies and organisations’ digital enablement and acceptance. In short, employers and employees have got used to working from home and that has changed people’s mindsets as to where they can live.

“Century 21 is seeing people move from Auckland and Hamilton to places like Te Awamutu, Tuakau, and Huntly. We’re seeing Wellington families moving to the Kapiti Coast, Palmerston North and Whanganui. It’s not because the parents have found new jobs. Rather, it’s because they can keep their old one!”

Businesses too have adapted to greater use of outside consultants and contractors, meaning more Kiwis mid-career are throwing in the office job to work from home self-employed.

“A decade or two ago Kiwis would do a bit of could consulting or contracting towards the end of their working life or when their kids were pre-school, but now, we’re seeing many more Kiwis working from home mid-career and mid-life,” Mayne says.

“Greater flexibility around work has been a key factor in the regions’ strong real estate resurgence.”

Davidson says that while it’s been a hectic first half of the year for the property market, nothing lasts forever.

“We have always been expecting a slowdown in both sales volumes and property value growth in the second half of 2021 and into 2022, and that remains on track – especially now that fixed mortgage rates, or those on longer terms, are rising.

“In other words, it looks likely to us that the market is now very close to (or at) the peak of this upswing. That said, with population growth having generally outpaced property supply increases over a period of several years, we’re anticipating a slowdown, not an outright downturn.”