The latest data from the Real Estate Institute of New Zealand (REINZ) reports sales volumes and prices up, but for how much longer will this high last? 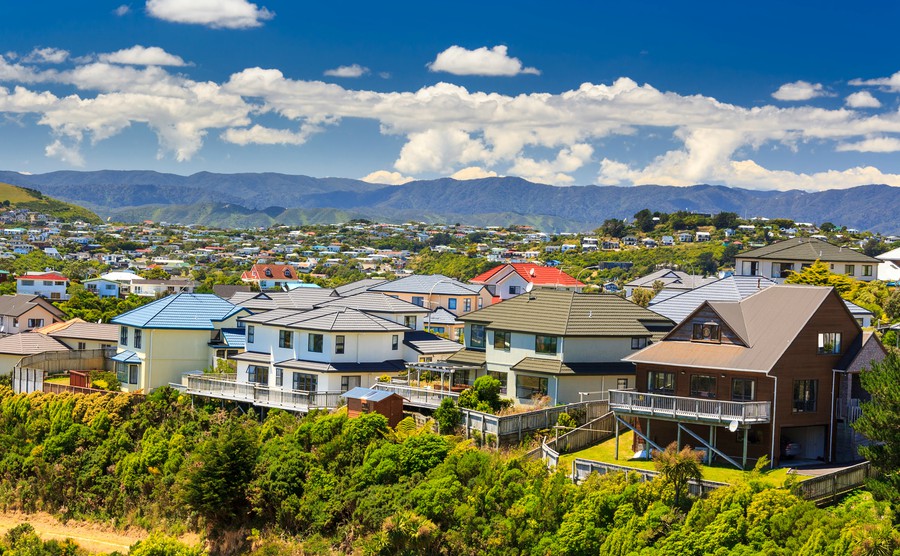 For New Zealand excluding Auckland, the number of properties sold increased by 21.5% when compared to the same time last year (from 4,328 to 5,258). This is the highest for the month of July in 15 years.

All regions, bar Gisborne and Marlborough, saw a year-on-year double-digit percentage increases in sales volumes – the first time we’ve seen this since April 2016.

Regions with the largest increase in annual sales volumes during July were:

Chief Executive at REINZ Bindi Norwell says: “New Zealand’s property market continued to defy expectations in July with sales volumes increasing by 24.6% when compared to the same time last year. This was the largest annual percentage increase in sales volumes we’ve seen for the country since September 2015, highlighting just how confident the market was during July.

“Even though anecdotally we’ve had a great start to August, the real question now, is how long this can be sustained for? Particularly now Auckland has gone back into Level 3,” continues Norwell.

“Focusing on the July results, the only region in the country not to see an uplift in sales volumes was Gisborne, which saw the number of sales fall by 38.9% when compared to the same time last year. With just over 100 new listings coming onto the market over the last three months, and a total inventory of just 7 weeks, it’s not entirely surprising that sales have fallen in the region,” points out Norwell.

“Part of the sales volumes can be attributed to post-COVID pent up demand; but underpinning this activity during July was strong levels of interest and engagement from all buyer levels including first home buyers, investors and families looking to upgrade their property,” she says. 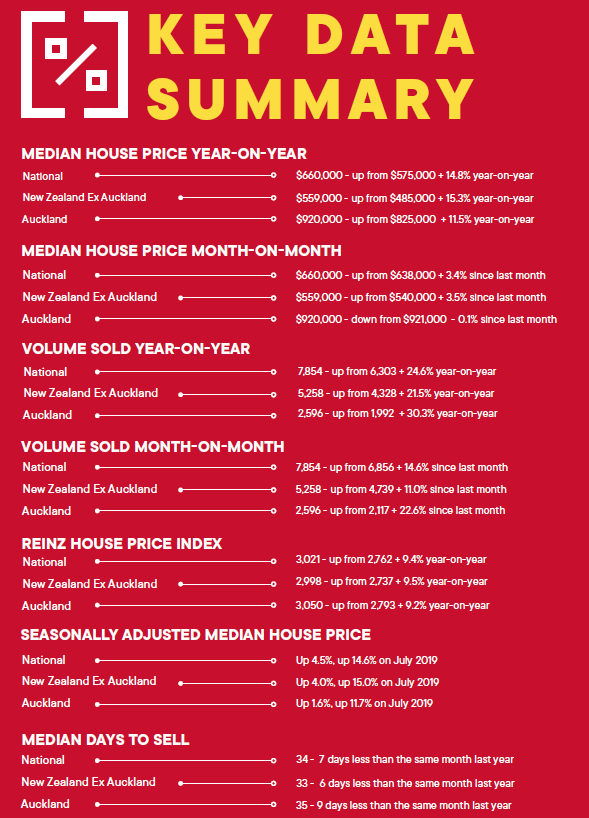 Record median prices were achieved in:

“July marked 106 months in a row of year-on-year median prices increases for the country and every region in the country saw an increase in median house prices during the month. Additionally, New Zealand excluding Auckland and four regions – Waikato, Gisborne, Manawatu/Wanganui and Taranaki – saw record median prices achieved.

“Even Queenstown-Lakes which everyone predicted would be one of the most hard-hit regions due to a lack of international tourists saw a record median price for the District in July of $1,100,000 up from the prior record set in March 2020 of $1,080,000. It’s a similar picture in Rotorua, where median prices are up 9.4% year-on-year to $487,000. Additionally, Dunedin was predicted to be hard-hit due to a lack of investors, but median prices are up 10.8% annually to $515,000,” says Norwell.

“Looking at Auckland, every area in the region saw a solid uplift in median prices during July compared to a year ago, and Manukau City had a record median price of $928,000 up from the prior record set in March this year of $920,000,” she continues.

“Economist and property experts across the country will be keeping an even closer eye on the housing market now we’ve moved back up the Alert Level system. If the same pattern occurs as did during the last lockdown, we would expect to see prices hold again post lockdown – although time will tell,” continues Norwell. 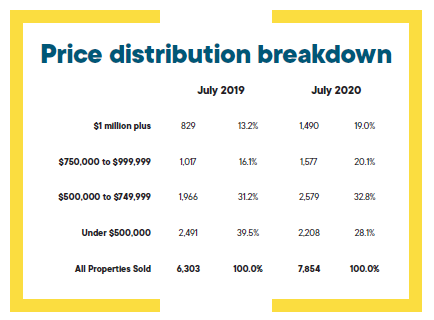 The REINZ House Price Index for New Zealand, which measures the changing value of property in the market, increased 9.4% year-on-year to 3,021.

This was the first time in 2 months, but only the second time in two years that Manawatu/Wanganui has not been in the top 3 for the 12-month period.

Both the 1 month and 3 month data show the underlying value in the market overall has held up with uplifts of 2.0% and 1.4% for the country respectively, despite COVID-19.

Days to sell lowest for a July month in 4 years

In July, the median number of days to sell a property nationally decreased 7 days from 41 to 34 when compared to July 2019, the lowest for the month of July in 4 years.

For New Zealand excluding Auckland, the median days to sell decreased by 6 days from 39 to 33, the lowest for the month of July in 4 years.

Auckland saw the median number of days to sell a property decrease by 9 days from 44 to 35 year-on-year, the lowest for the month of July in 4 years.

“To have 13 out of 16 regions with a median number of days to sell below the 40 mark in a July month is extremely unusual, showing just how quickly the market is recovering from lockdown. As we move closer to the election and as more unfolds with the latest COVID outbreak, we would expect this to slow down a bit. However, with the market appearing to do the exact opposite of what was predicted, time will tell what happens with days to sell” says Norwell 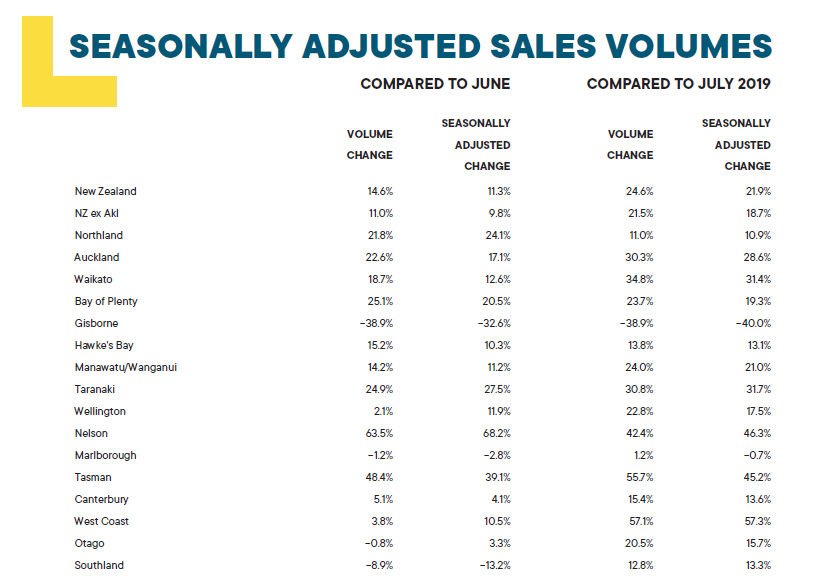 Auctions were used in 13.8% of all sales across the country in July, with 1,085 properties selling under the hammer – up from 8.6% at the same time last year, when 539 properties were sold via auction. This was the highest percentage of auctions for the month of July in 4 years.

“Every auctioneer we speak to has said how buoyant the market is right now and how unusually busy auction rooms are for this time of the year – both in terms of the number of registered bidders and people just getting a feel for where the market is at,” says Norwell.

Inventory falls for 13 months in a row

The total number of properties available for sale nationally decreased by -11.0% in July to 19,441 down from 21,843 in July 2019 – a decrease of 2,402 properties compared to 12 months ago and the lowest level of inventory for the month of July since records began.

Gisborne had the lowest number of weeks’ inventory with 7 weeks inventory available to prospective purchasers, the same as last year’s figure. This was followed by Manawatu/Wanganui and Wellington with 10 weeks’ inventory.

“We’re still not seeing enough new listings come to the market to meet consumer demand right now. Hopefully, this will start to change as we move towards the warmer months of the year,” concludes Norwell.