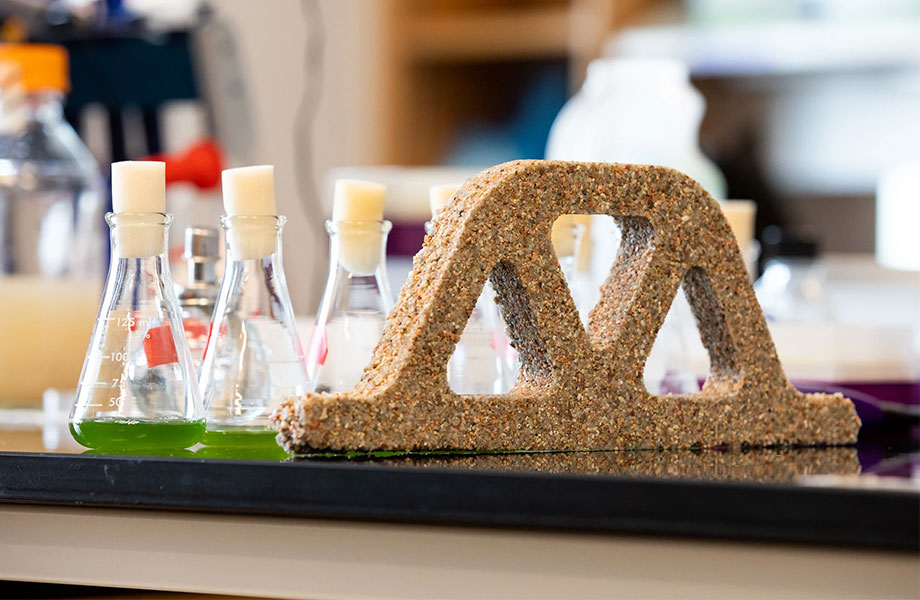 The new “living concrete”, being developed by researchers in the US, is at the forefront of a new class of low-carbon, designer living building materials or LBMs, according to a recent article in the New York Times.

Minerals in the new material are deposited by microbes that capture energy through photosynthesis, a process which, unlike the production of regular concrete, absorbs rather than emits carbon dioxide.

Structural engineer and head of the research project, Wil Srubar, says these photosynthetic bacteria give the product a distinctive green colour, “it really does look like a Frankenstein material.”

The concept is based on incorporating biology into concrete, enlisting bacteria to help build blocks of the material, and keeping them alive so they make more later on.

While the bacteria gradually begin to die out, blocks are still “alive” after a few weeks, and have the potential to be rejuvenated when again exposed to high temperature and humidity.

The US defence department, which funded the original project, has shown interest in using the reproductive ability of living building materials to aid construction in remote or austere environments.

“Out in the desert, you don’t want to have to truck in lots of materials,” Srubar said.

And with continued demand for sustainable options in Australia’s construction sector, this type of concrete also has the advantage of being made from a variety of common materials rather than requiring sand from rivers, lakes and oceans—an already diminishing resource thanks to worldwide demand.

“We’re not pigeonholed into using some particular kind of sand,” Srubar said.

“We could use waste materials like ground glass or recycled concrete.”

Adhesive cells, or “biofilms”, could also provide the ability to produce a chemical or structural component on demand, an innovation that could potentially lead to a concrete that “heals its own cracks” by producing its own glue when repair is required, according to research published in the journal Matter.

While key practical concerns are still to be addressed—strength, bacterial resistance to dehydration and the ability of the material to be easily flat-packed and assembled (like slabs of drywall), Srubar believes there is potential for even more innovation in the realm of living building materials: materials that can detect and respond to toxic chemicals, for example, or that light up to reveal structural damage.

And thinking even further afield, Srubar suggests that living concrete might help in environments even more extreme than the deserts here on Earth.

“There’s no way we’re going to carry building materials to space. We’ll bring biology with us.”