August’s REINZ figures saw an annual increase in median house prices across every region in New Zealand, half of which reached record highs, but opinions are split as Treasury predicts the average cost of a home will fall 5% by June next year

Median house prices across New Zealand increased by 16.4% in August to $675,000, up from $580,000 in August 2019 and up from $659,000 in July (a 2.4% lift). Despite this, Treasury has forecast a 5% drop in house prices by June 2021 in the Pre-election Economic and Fiscal Update (PREFU). Many economists, property experts and commentators disagree however, leaving the future of the housing market uncertain. House prices on the up

Over and above Auckland, 7 regions saw record median prices during August:

Bindi Norwell, Chief Executive at REINZ says: “For the last few weeks we’ve been hearing reports from around the country of vendors achieving good prices for the sale of their homes; but we would never have guessed that 8 regions and 17 Districts/Cities across the country would see record median prices just 4 months after the entire country was in lockdown. The housing market’s recovery post-lockdown over the last few months has been astonishing and has certainly surpassed many predictions.

“The combination of low interest rates, the removal of LVRs, the lack of listings, people’s aspiration to have more space/a bigger backyard, catch up post lockdown and first time buyers’ desire to get onto the market have all contributed to the uplift in prices we’ve seen over the last few months. Unless we see more listings come to the market before Christmas, we may start to see additional pressure on house prices and affordability,” points out Norwell. 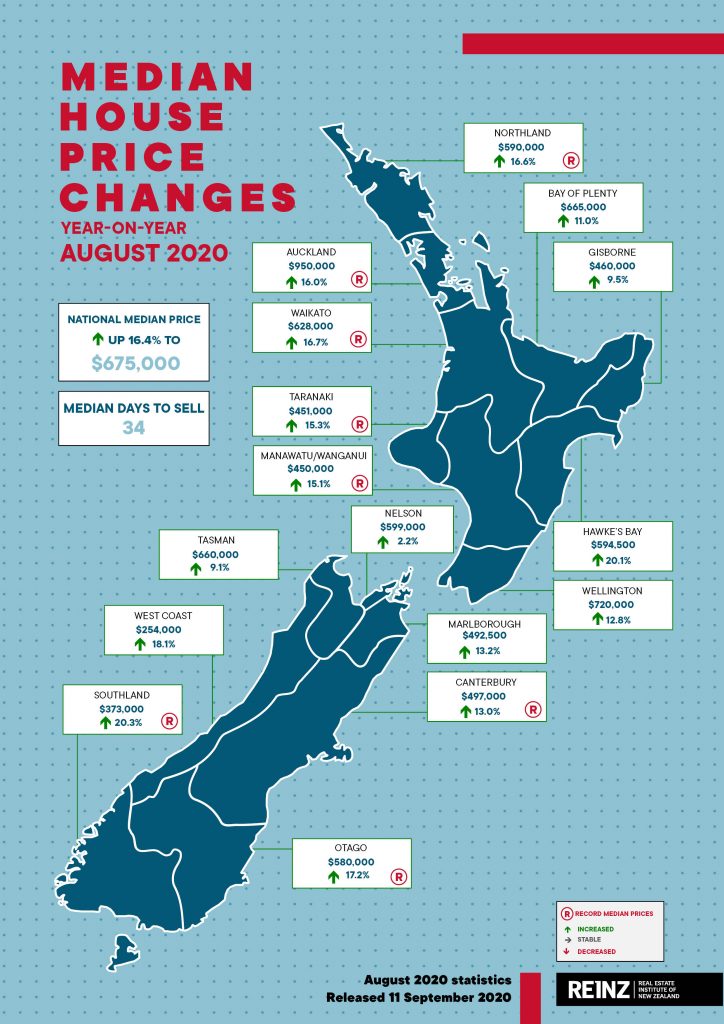 The number of residential properties sold in August across New Zealand increased by 24.8% from the same time last year (from 6,132 to 7,652) – the highest number of properties sold in an August month for 5 years. The median number of days to sell a property nationally decreased 5 days from 39 to 34 when compared to August 2019, the lowest for the month of August in 4 years, and the same figure as July this year.

“For many parts of the country, August was an extremely busy month sales volume wise. Overall, there were 1,520 more residential properties sold this August than last August which equates to an additional 49 properties sold a day which is pretty incredible,” says Norwell.

“The Level 3 ‘lockdown’ imposed on Auckland from 12-30 August had little impact on sales volumes, with last month seeing the highest number of properties sold in an August month for 5 years showing how the adoption of digital tools has been a key factor in keeping the property market moving as we moved back up the Alert Level system,” she continues.

“It will be interesting to see what happens now that we’re heading into spring, as traditionally sales volumes start to lift as the weather warms up. As we’ve already seen, 2020 seems to be defying all predictions and going against all norms at this point in time. However, the full impact of COVID-19 may not have been realised yet, particularly in relation to unemployment and the economy,” she continues. 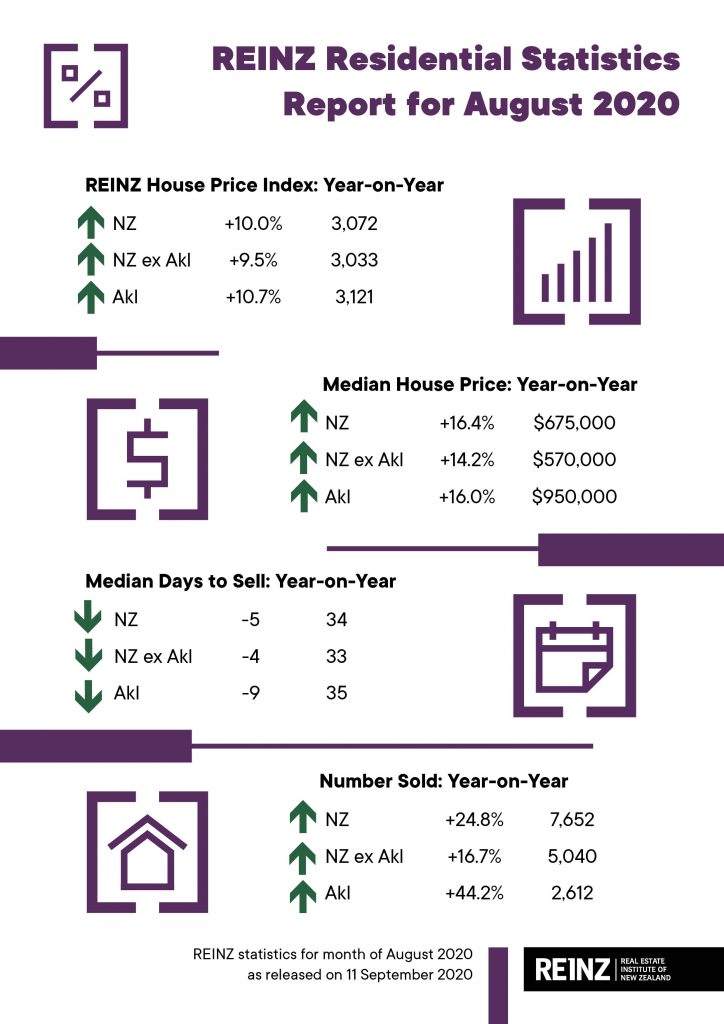 So did Treasury get it wrong?

Treasury predicts the average cost of a home will fall 5% by June next year, before rebounding as economic confidence recovers and immigration picks up. However, major banks Westpac and ASB are among those that have reforecast house prices. Westpac now predicts a 6.3% increase in house prices this year, followed by an 8% lift in 2021. ASB now expects national house prices will only fall by 2.8% by March next year compared to their previous forecast of a 6% drop overall.

Others are expecting prices to start rising again in 2021, with economists anticipating the Reserve Bank will cut the Official Cash Rate to below zero next year, pushing already record-low interest rates down further.

The head of Century 21 New Zealand is joining a growing number of economists, property experts and commentators saying Treasury has got it wrong in its forecast on house prices in the Pre-election Economic and Fiscal Update (PREFU) even with the country now in recession.

“Back in March, the experts were miles off with their dire winter and spring real estate predictions, and they’re set to get this coming summer wrong as well,” says Century 21 New Zealand Owner Derryn Mayne.

“There are simply more factors in real estate’s favour, than are against. Unemployment is set to be less than initially forecast, interest rates are expected to stay at record low levels if not going lower, the removal of LVRs makes it easier for people to get into the housing market, demand remains strong while supply is short, and rents are holding up,” she says.

“New Zealand’s property market is proving to be very resilient, with the coming summer season set to be stronger than many anticipated.

“The wage subsidy extensions, the General Election’s deferral to 17 October, and the mortgage holiday scheme now running through to 31 March 2021 have all helped to keep real estate buoyant in August and September.”

“The property market’s key fundamentals remain in great shape, with mortgage rates never lower and prices in the regions doing extremely well despite what many pundits predicted,” she says.

“Waiting for house prices to fall may not be the best strategy for those keen to buy, with most regions now seeing properties flying out the door and many houses fetching well above any asking price or expectation.”

Agents report more people are attending auctions and open homes, with listings still in short supply. Far fewer investors now believe that they will find bargains, fewer buyers generally retain fears that prices will fall, and a net 81% of agents say that they are seeing property prices rising.

New Zealand’s Century 21 owner says agents are also reporting people keen to move out of the cities, with coastal and lifestyle properties proving popular in the current Covid-19 environment.

“Many people now realise they can work from home very effectively and in many cases more productively and for cheaper. Subsequently, we’re seeing people selling up in the bigger cities, freeing up a bit of equity, and opting for an easier lifestyle with more space and less people.

“What’s more, no overseas holidays in the foreseeable future sees more Kiwi families looking at holiday houses and baches instead, knowing that strong domestic travel will give them good ‘bookabach’ income too,” she says.

“There’s a lot of talk that the economic fall-out from Covid-19 will see New Zealand become a starker country of ‘haves’ and ‘have nots’. Getting into the property market sooner rather than later, and making the most of the very low borrowing costs, is one of the best things Kiwis can do to ensure they’re participants in New Zealand’s economic recovery, not bystanders,” Mayne says.