Median residential property prices across New Zealand have increased by 1.2 per cent year-on-year to $525,000 according to the latest data from the Real Institute of New Zealand (REINZ). 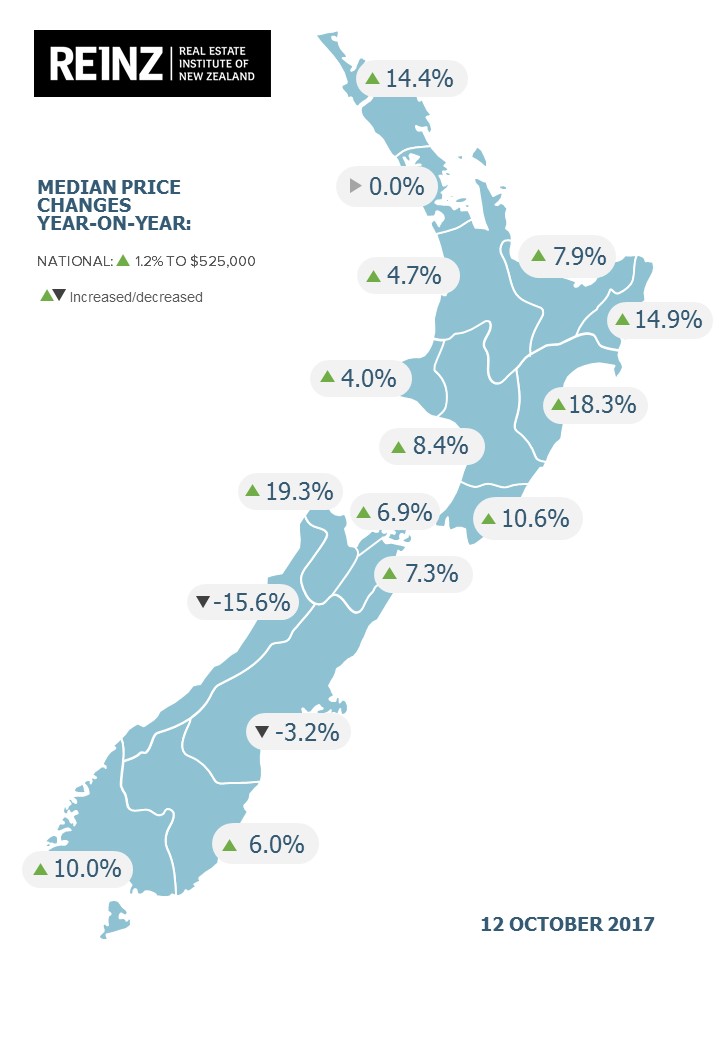 Bindi Norwell, CEO at REINZ says: “Prices across the country increased in all but three regions, evidence that the market continues to grow despite some challenging conditions – including the LVR restrictions and banks continuing to tighten lending conditions.

“Much of the increase has been driven by the buoyancy in the regions.”

Looking at the regional picture, again all 16 regions in the country experienced a decrease in the number of properties sold on a year-on-year basis.

Regions with the biggest reduction in volumes were Tasman (down 37 per cent), Southland (down 34 per cent) and Auckland (down 31.5 per cent).

Marlborough experienced the lowest number of sales since January 2012 (down 27.4 per cent).

The month-on-month figures provide a more positive picture, however, with a number of regions experiencing an increase in the number of sales in comparison to August, and two regions experienced double-digit growth – Gisborne (up 25 per cent) and Taranaki (up 11.4 per cent).

“However, it’s not all doom and gloom as there are pockets of the country experiencing increases month-on-month and median prices are increasing in the majority of regions across the country,” continues Norwell.

The REINZ House Price Index for New Zealand increased 0.7 per cent month-on-month to reach an all-time high of 2,699 during September, indicating that the ratio of sales prices when compared to CVs is at its highest point since the Index began.

The HPI also showed that all but three regions (Auckland, Taranaki & Canterbury) reached a new high during September indicating strong value growth across most of the country.

Number of days to sell

The median number of days to sell a property nationally increased by 3 days (from 31 to 34) when compared to September 2016.

Regions with the biggest decreases year-on-year included the West Coast (down 13 days to 105), Gisborne (down 3 to 28) and Hawke’s Bay and Nelson (both down 2 days to 28 and 23 days respectively).

Interestingly though, the median number of days to sell on a month-on-month basis, decreased for all regions bar the West Coast.

The number of properties sold by auction continues to decline across New Zealand with 807 auction sales in September – down 54.5 per cent on the same time last year.

Auctions now only represent 14.9 per cent of all sales nationally.

In Auckland, which traditionally sees a large portion of sales sold by auction, only 422 (26.5 per cent) of all properties sold in September were via auction – this is a decrease of 57 per cent in comparison to September 2016.

No regions saw an increase year-on-year in the number of properties auctioned,

However, month-on-month Gisborne, Manawatu-Wanganui, Otago, Southland, Taranaki and Waikato all saw an increase in auction numbers.

Excluding Auckland, the number of properties for sale fell by 9.5 per cent (from 15,798 to 14,298) highlighting the impact Auckland has on the overall picture.

In addition to Auckland, three other regions experienced an increase in listings – Waikato (8.2 per cent), Wellington (2.8 per cent) and Canterbury (3.6 per cent).

The regions with the biggest decrease in inventory were Gisborne (29 per cent), Taranaki (24.3 per cent) and Manawatu-Wanganui (22.7 per cent).

Northland, Taranaki and West Coast have the lowest levels of inventory since records began 10 years ago.

“While volumes are down, median house prices across the country have increased again.

As the weather warms up we expect the market to pick up again.”