The New Zealand housing market showed further signs of strengthening across the board in October with all main urban areas experiencing a lift in property values, CoreLogic New Zealand’s Head of Research Nick Goodall observes

The CoreLogic QV House Price Index showed that nationwide, average property values rose by 0.4% in October and the annual growth rate increased from 2.4% to 2.8%. This is the strongest annual rate of growth since February 2019, while the quarterly rate of growth of 1.4% is the strongest rate in almost 2 years; the last time values were rising this fast on a rolling quarterly basis was in January 2018 (1.7%).

The October House Price Index result provides further confirmation that housing market conditions are building momentum, following the tentative signs of growth witnessed last month. The trend towards stronger conditions is consistent with the increased demand for property in the wake of the easing in serviceability tests by the banking sector over two months ago.

Regionally, the standout performer from our main centres remains Dunedin. Values increased 2.7% over the month to be up 6.0% over the last three months. This quarterly increase is the strongest rate experienced in Dunedin for almost 15 years (since February 2005). The average value in the ‘Edinburgh of the South’ has grown 14.7% in the last year, to $486k, which is only $13,000 short of its much larger southern cousin Christchurch. Viewed in another way, housing in Dunedin is becoming less affordable, as Christchurch’s affordability gradually improves. That said, Dunedin’s upswing is happening for good reason. The strong local economy, boosted by the building of the new hospital, as well as a healthy rental property market (8% annual rental growth, 4% gross yield) has seen continued growth while other main centres have faltered. The hospital is set to be the single biggest hospital build ever in New Zealand – costing up to $1.4 billion, and at its peak will have up to 1,000 workers on site. Property investors secured 38% of all residential sales in Dunedin in the third quarter of this year, the highest share to this group since the first quarter of 2016.

This uplift in investor activity has been relatively common across the country as a reduction in serviceability interest rates has allowed more buyers to secure lending who were previously unable to satisfy bank criteria. Property investors have a renewed confidence in the market, and those with the equity and cash flow to secure mortgages are taking advantage of competitive interest rates to continue to invest for their retirement.

Assets generally considered safe, such as cash and bonds, continue to offer up low returns and stocks are still an ‘unknown’ for many. So with multiple credible forecasts for property market growth through 2020 and into 2021, it’s a no-brainer for many. It’s also not a long bow to draw that the rejuvenation of investors is a flow-on from the Government ruling out any form of comprehensive capital gains tax back in April, up-to which, uncertainty had created caution. 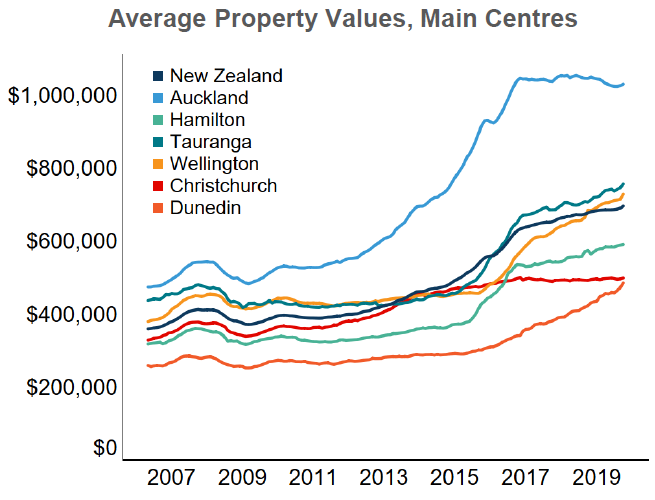 Meanwhile Auckland values remain below (-1.5%) the same time last year, although the more recent trend has shown values are once again rising, with three monthly growth of 0.6%, which is the strongest three month performance in the Super City since February 2018. The North Shore of Auckland, which had previously headlined the weakness in Auckland is now leading the recovery, with 1.5% growth in the three months to the end of October.

Outside our largest cities, many of our provincial centres went from strength to strength. The top six, when ranked by annual growth last month, saw further increases to that annual rate in October. In Gisborne (17.7% p.a.) and Rotorua (13.4% p.a.) the annual rate increased by 4.2%. However in Whangārei the same cannot be said. The northernmost city of NZ has cooled, and with values dropping earlier in 2019 the annual rate of change (-1.4%) has entered the negatives for the first time since April 2013. A higher average value of property ($546k), especially when compared to average income for the area, has led to affordability issues in Whangārei. The negative result for Whangārei highlights, that despite record low interest rates and a generally positive outlook, not all markets will continue to grow forever. Those investors buying on the promise of capital gain, should temper their expectations. While many analysts, including ourselves, are expecting nationwide growth to increase next year, there will be varying degrees of growth around the country. We’re also moving into one of the busiest times of the year for property transactions. November is typically the second strongest month for sales volumes each year (behind only March). I would expect plenty of positive headlines in the media as we round out 2019, but as per usual I’d encourage prospective buyers to undertake more thorough research into your market before signing that next title.

The key focus is on the Reserve Bank for November. Market predictions of a drop to the official cash rate (OCR) next Wednesday are reducing in their numbers, and given the recent strength in both property values and investor activity (including in the RBNZ lending data) we’re even wavering in our confidence of a loosening to the loan to value ratio (LVR) restrictions when the Bank releases their next Financial Stability Report on 27 November. Property data analysed between now and then could prove crucial to the Bank’s decision on whether they believe any loosening to the LVR restrictions could reduce the resilience of households and banks, and therefore they may leave them as they are.