These latest statistics will be a wake-up call to the Government and Reserve Bank – if they continue to tighten the screws too hard, the very people they’re trying to protect will be the ones most adversely affected, Century 21 New Zealand Owner Tim Kearins says 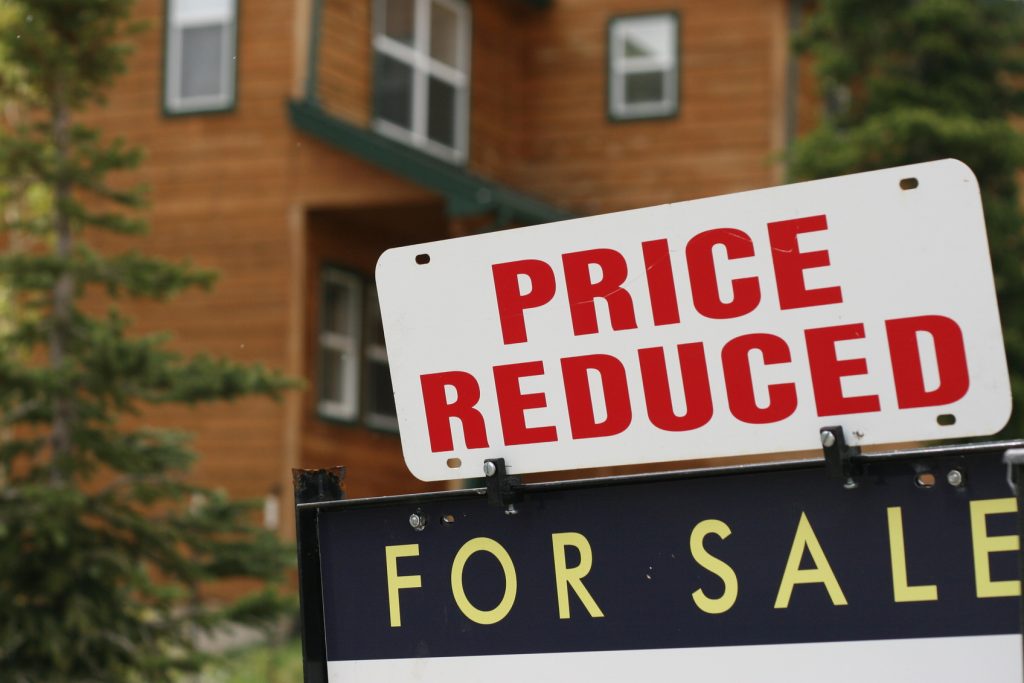 We’re starting to see the lending restrictions that took effect in November and December playing out in the Real Estate’s Institute’s latest monthly statistics. Unfortunately, it’s first-home buyers who are bearing the brunt of it.

This may seem like good news to first-home buyers, but the reality is only a handful are now allowed to borrow more than 80%, so most are falling well short with their deposit. On top of that, significantly fewer mortgage applications are being approved because banks now need to conduct ultra-conservative assessments on all new borrowers.

Since 1 November, Reserve Bank restrictions have meant banks are only able to lend 10% of their new lending to owner-occupiers wanting to borrow more than 80% of a house’s value. Then on 1 December changes to the Credit Contract & Consumer Finance Act (CCCFA) took effect which has led to criticism that too many new home loans are being declined unnecessarily.

I’m pleased the Government has asked the financial regulators to bring forward their investigation as to whether the CCCFA is being implement as intended. Unfortunately, how it’s currently being applied is not only hurting first-home buyers, but next-home buyers with an exemplary repayment history.

I appreciate that the Government and Reserve Bank are determined to get on top of rampant house inflation, but let’s not kill off too many Kiwis’ dreams of home ownership and quest for greater security.

All eyes will be on the next Official Cash Rate announcement on 23 February, with the coming weeks perhaps the best time for home buyers to lock in a good mortgage rate. 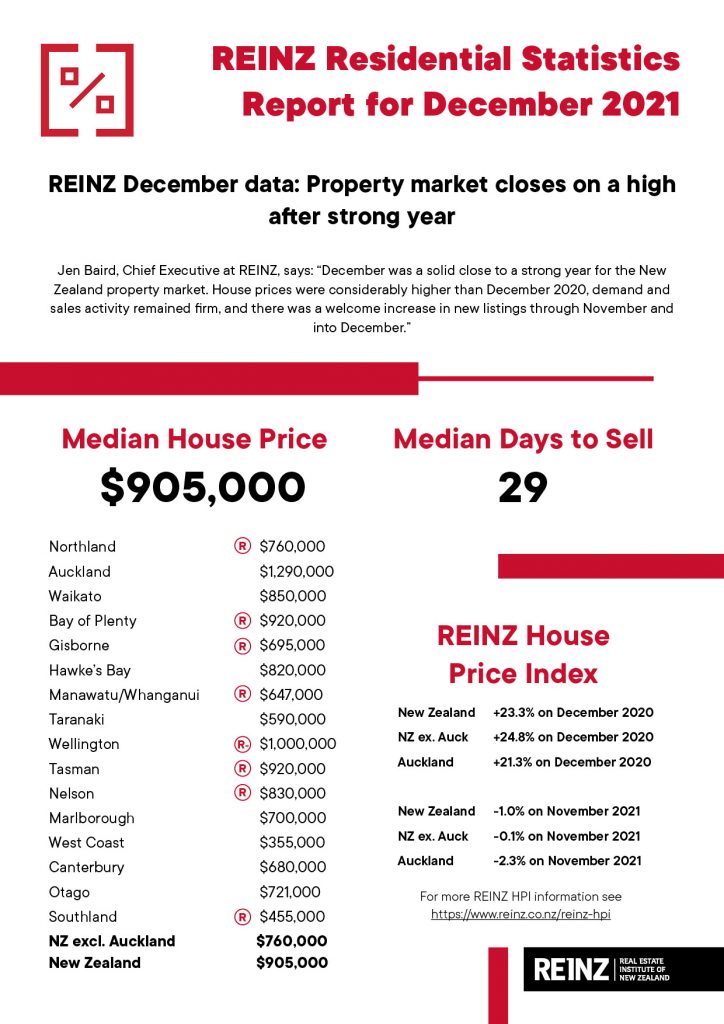 Property market closes on a high after strong year

REINZ December sales data rounds off a strong year in the New Zealand property market, with prices and activity holding strong and steady. However, commentary from agents across the country suggest market headwinds are gathering strength, according to the latest data and insight from the Real Estate Institute of New Zealand, home of the most complete and accurate real estate data in New Zealand.

Seven regions achieved record medians and there was one equal record in December:

Nineteen territorial authorities had median price records in December. This was the lowest number since July 2021.

Jen Baird, Chief Executive of REINZ, says: “December was a solid close to a strong year for the New Zealand property market. House prices were considerably higher than December 2020, demand and sales activity remained firm, and there was a welcome increase in new listings through November and into December.

“Across New Zealand, there was an annual increase of 21.5% in the median price, reaching $905,000 — down 1.6% compared to November 2021. New Zealand excluding Auckland saw a yearly increase of 20.6% to $760,000 — a 1.3% decrease compared to the month prior. When we consider the seasonally adjusted median prices, which assesses a month’s performance outside of predictable seasonal patterns, December price movements were as expected.

“However, we are noting signs of deceleration in annual price growth compared to previous months. While the market remains confident, the impact of rising interest rates, tighter lending criteria and changes to investor taxation restrictions are starting to shift dynamics.

“In particular, the amendment to the Credit Contract and Consumer Finance Act (CCCFA) on 1 December 2021 — which requires stricter scrutiny of borrowers’ financial health — seems to have had an immediate effect. Feedback from several regions notes a falloff in buyer numbers — particularly first-time buyers — as a result.

“Over 2022, the impact of these changes and anticipation of further interest rate increases are likely to play out in the market, leading to a gradual slowdown in the pace of price growth,” Baird observes. 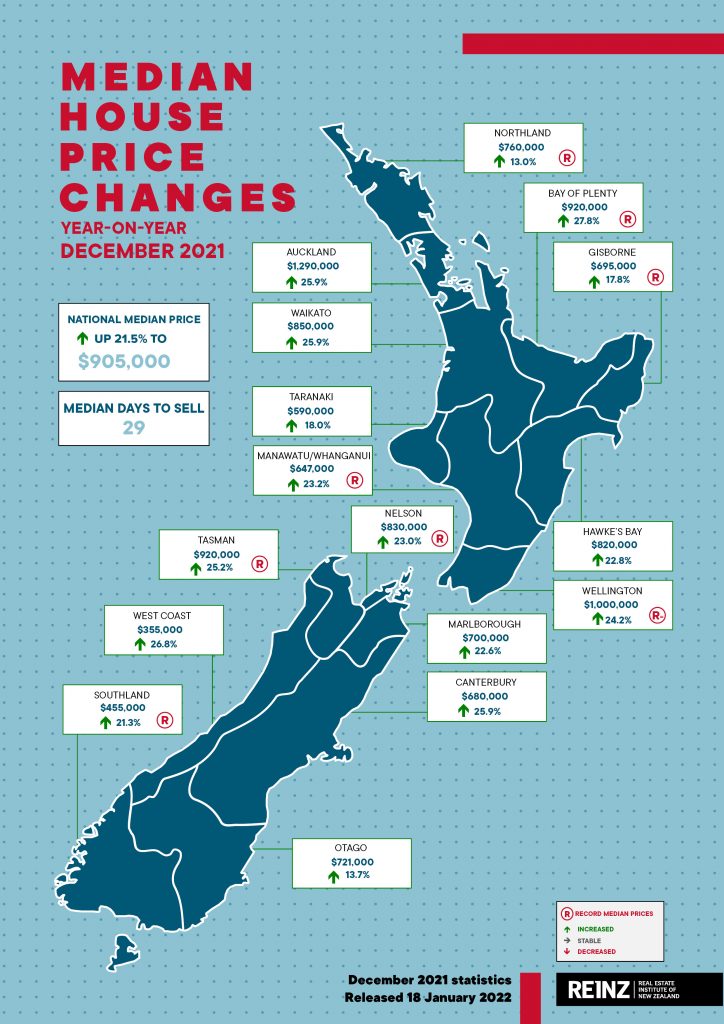 Property sales down in December

Marlborough was the only region to see an annual uplift in sales count with an increase of 5.1%. The number of properties sold in the region increased from 78 in December 2020 to 82 in December 2021.

In addition to Auckland, the regions with the greatest annual percentage decrease in sales volumes were:

“Nationwide sales decreased annually by 29.4% in December 2021 and — following a strong November — there was a 21.4% monthly decrease. However, the usual holiday slowdown was less evident and there were reports of sales activity right up until Christmas.

“This may in part be due to New Zealand — and Auckland in particular — having fewer COVID-19 restrictions in terms of movement and business operations and the surge of listings in November lending to a flurry of activity in December.

“However, when we look at the seasonally adjusted numbers from November to December, we see an 11.3% drop. Adjusting for the usual seasonal trends, we do note that this result is weaker than would be typically expected.”

The REINZ House Price Index (HPI) for New Zealand, which measures the changing value of all residential property in the New Zealand, showed an annual increase of 23.3% from 3,435 in December 2020 to 4,235. This was a 1.0% decrease from November 2021.

“While all regions show an annual increase on the HPI, fewer new highs were reached in December compared to the months prior. Further, we are starting to see the rate of increase decelerate, suggesting that buyers are less willing to pay current market prices.

“Interestingly, for the second month in a row, Wellington had the lowest annual percentage change movement on the HPI, up 18.5% to 4,278. Although this is a high number it is weaker when compared to other regions and is a significant change for the region, which ranked in the top three of all regions for 12 months between September 2020 and August 2021,” Baird adds.

Only five regions reached new highs on the index:

Although Auckland’s house price value increased 21.3% annually to 4,176, the region saw the greatest decrease from its peak high — down 2.3% on the record set in November 2021.

“With few exceptions, the median days to sell in December was lower than the month prior across New Zealand. Twelve regions had days to sell of less than or equal to 30 days — the most since March 2021. However, it is worth noting that the median days to sell has increased annually. Anecdotally, this may in part due to the CCCFA which took effect at the start of December. There is concern being expressed by some in the real estate profession about the impact these changes are having on some previously active buyers’ ability to participate in the market or complete a sale,” Baird says.

Levels of inventory continue to increase

Inventory levels increased in most regions, some recording a significant jump, as restrictions eased across New Zealand and those who previously held back their properties brought them to market. Wellington increased 206.6%, from 346 in December 2020 to 1,061 in December 2021. Manawatu/Whanganui increased 133.7% annually, from 315 to 736, and Hawke’s Bay increased 107.4%, from 203 to 421.

“The increase of inventory in the market is welcome news for buyers, who benefit from greater choice. Following long-term supply shortages, properties are selling quickly. We note that eleven of the sixteen regions have 10 or less weeks of inventory available, suggesting that supply-side pressure on prices remains.

“Should stock levels continue to increase at this rate, we would expect it may start to rebalance the supply versus demand scales and, in turn, alleviate some price pressure. However, given market appetite, it will be interesting to see how it plays out,” Baird concludes.

Gisborne maintained its top position with the highest percentage of auctions. In December 2021, 53.4% (31) of properties sold by auction, down from 65.2% (43) the year prior. The Auckland region continues to demonstrate a growing preference for auctions, with 48.9% (1,130) of properties sold by auction in December. Though down on November (51.6%), it represents an annual increase — up from 43.4% in December 2020.