REINZ’s report of a 1.1 percent increase in house prices between May and June suggests the market has flattened out overall, which is better than most expected 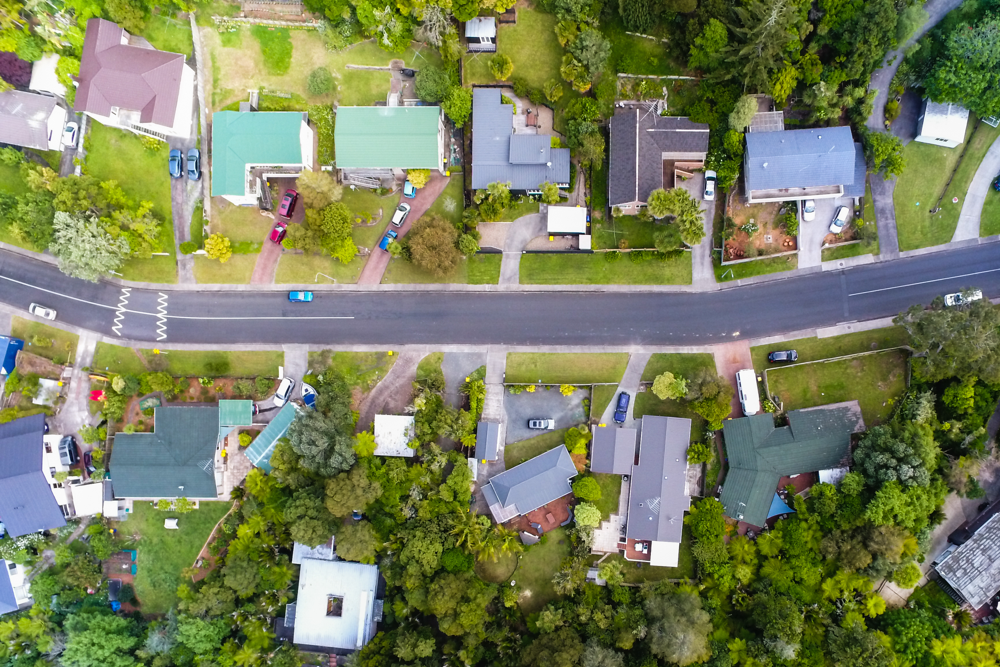 REINZ reports: ‘With more stock on the market, more opportunity for negotiation, and prices off their peak, for those with access to finance, there is opportunity here. Reports from real estate professionals across New Zealand suggest owner-occupiers remain strong in the market. First-home buyers are remerging…’

Kearins says what is really helping first-home buyers is the fact that thousands more are now eligible for government assistance to pull together the all-important deposit. House price caps for the First Home Grant have been increased and for First Home Loans they’ve been entirely removed.

“Big banks remain tough with new borrowers, however, it doesn’t all begin and end with the banks. More and more first-home buyers are discovering that mortgage brokers can deliver competitive rates and greater borrowing flexibility than traditional lenders,” he says.

With the Reserve Bank signalling interest rate rises for the foreseeable future, any buyers stalling to see if house prices fall much further risk paying more to service their lending.

“In recent years, many prospective first-home buyers have been locked out of the housing market. This winter they’ve finally been handed some keys and that’s great for them.

“There are also plenty of next-home buyers out there. A change in personal circumstances, opting for more work-life balance, or a new job, are arguably happening more than ever, and that often means a new address,” says Kearins. 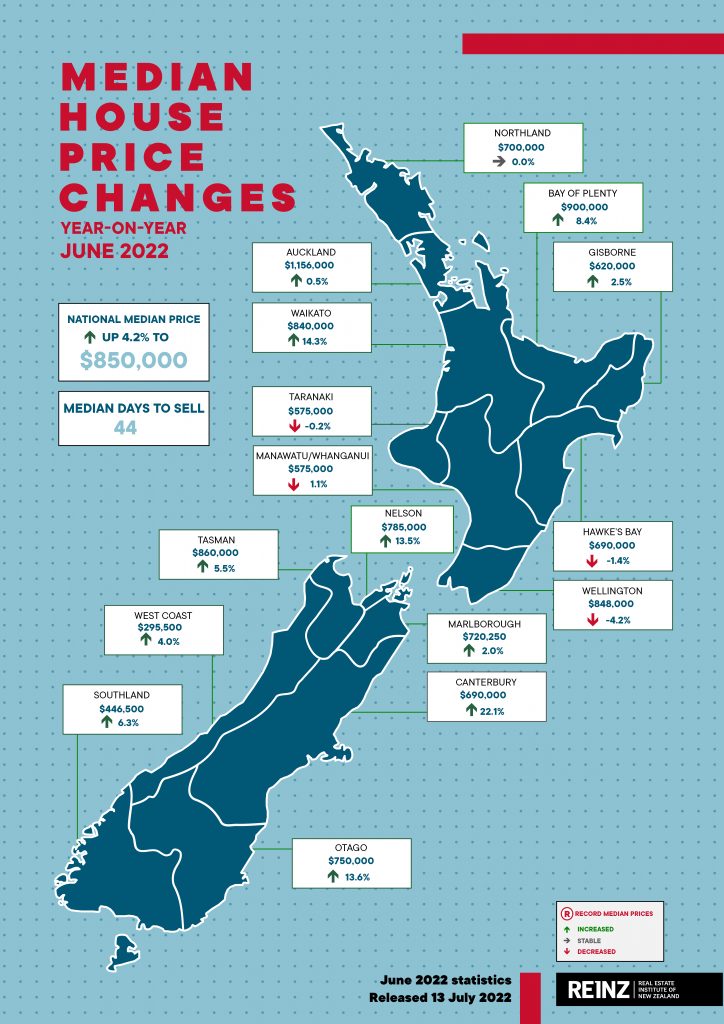 Up on May’s numbers

Following negative annual movement in May, the median price in Auckland increased 0.5% compared to June last year from $1,150,000 to $1,156,000 in June 2022. Auckland also recorded a month-on-month increase of 2.8% — up from $1,125,000 in May. Though Auckland City and Waitakere City recorded negative annual median price movements, the smaller territorial authorities (TAs) of Rodney, Papakura and Franklin had double digit increases in median price.

Six territorial authorities (TAs) achieved record medians. Three of those were in Waikato, two in Canterbury and one in the West Coast. More information on activity by region and TA record median prices can be found in the regional commentaries in the REINZ Monthly Property Report.

“While Canterbury saw its median price increase 22.1%, and Waikato was up 14.3%, four regions dipped into negative annual price movements. Wellington was down 4.2% compared to June last year.

“Housing affordability remains an issue for many buyers on the market. Paired with tighter lending restrictions, higher interest rates and concerns over inflation, we are seeing hesitancy amongst buyers.

“As the market stabilises, and the high-growth we saw through 2021 dissipates, downward pressure on prices may improve affordability. However, this is balanced with higher mortgage costs and wider economic headwinds that may continue to temper people’s appetite for entering the market — as a buyer or seller.

“Further changes to the Credit Contracts and Consumer Finance Act (CCCFA) regulations have been implemented, which may alleviate some pressure on borrowers. However, it’s yet to be seen whether the recent changes go far enough to remedy the handbrake on activity they initiated when introduced in December 2021,” Baird observes.

All regions saw an annual decrease in the number of sales, only West Coast (+31.0%) had a month-on-month increase.

Those with the greatest annual percentage decrease were:

“We expect activity to decrease over the winter months as part of the usual annual property market cycle,” Baird says.

“The seasonally adjusted figures moving from May to June show a 5.8% decrease — so while sales activity was still below what is expected, the drop isn’t as stark.”

Owner occupiers remain strong in the market and first home buyers are more confident, but investors remain quiet for now, she says.

“There is much more negotiation happening in the market today as buyers are more cautious of potential price declines after they have purchased, and vendors understandably want the best prices possible in an uncertain market.

“For vendors motivated to sell, they should seriously consider advice from their real estate professionals who are operating at the coal face and understand market sentiment. This may involve presenting a property in a particular way or adjusting price expectations so as to give the real estate professional the ability to conduct negotiations with vendors that lead to a sale for the best possible price,” Baird comments.

Including Auckland, four of the 12 regions had a negative annual HPI movement. Wellington saw a further decrease on the index, down 12.2% compared to June last year — from 4,134 to 3,631. Wellington has now ranked bottom two of all regions on the HPI for eight consecutive months.

All regions have had decreases in HPI movements over the past three months. Canterbury, Taranaki and Southland have seen the best results, down 2.5% over the three months ended June 2022.

Across New Zealand, the median number of days to sell (DTS) a property in June was 44 — up 13 compared to June 2021. For New Zealand excluding Auckland, it increased 15 days to 45.

Two regions saw annual decreases in the median DTS; West Coast was down five days to 28 and Gisborne was down three days to 38 — the region’s lowest days to sell since January 2022.

“The figures indicate stock is staying on the market for longer. In June, inventory levels increased 89.5% and the median days to sell across New Zealand is now 44. Meanwhile listings were up a more marginal 1.6%,” Baird says.

“More stock on the market, means more choice for buyers. With stock growth in some regions in triple figures, the urgency we saw through 2021 has eased and buyers feel they have more time to find the right property, undertake their due diligence and make an informed life decision.

“However, there are multiple factors at play, including a lengthier sales process as we continue to see more sales conditional upon finance or sale of a home. Further, access to finance and concerns around inflation and rising interest rates cause hesitancy amongst would-be buyers and sellers,” Baird adds.

“Over 2021, the market was highly competitive, and auctions increasingly became the preferred method of sale, underpinned by a high clearance rate. As the market has slowed and the pool of buyers able to buy unconditionally has decreased — with more contracts subject to finance or other conditions — homeowners are considering alternatives,” concludes Baird.