While REINZ’s October figures saw an increase in enquiry and open home attendance in some regions, rising interest rates have caused hesitancy 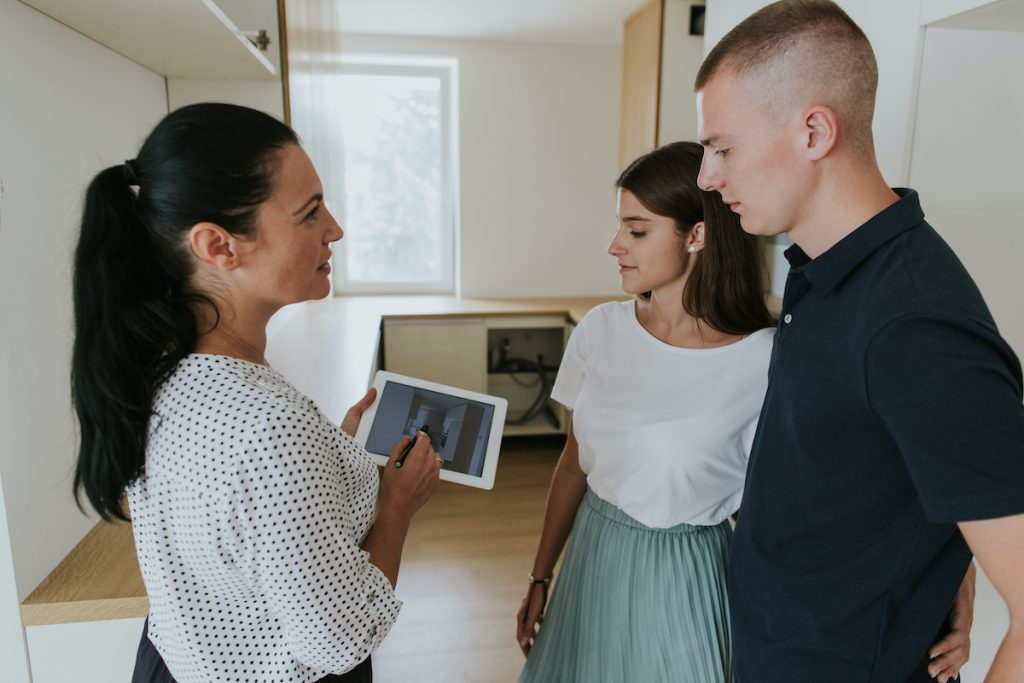 While October sees an increase in enquiry and open home attendance in some regions, rising interest rates have caused hesitancy amongst buyers across Aotearoa New Zealand. The national median price showed improvement on September. Still, prices continue to ease, sales activity remains down and properties are taking longer to sell than in October 2021, according to the latest data and insights from the Real Estate Institute of New Zealand (REINZ), home of the most complete, accurate and up-to-date real estate data in New Zealand.

In Wellington, the median price was down 17.2% annually, from $1,000,000 to $828,000 in October 2022. Wellington has recorded five consecutive months of year-on-year median price decreases — the first time since May to September 2011. All eight Territorial Authorities (TAs) had negative annual median price movements, with South Wairarapa seeing the greatest decrease, down 33.7%, followed by Carterton, down 26.5%.

“In October 2021, increased optimism over the easing of lockdown restrictions in Auckland combined with a delay to the introduction of changes to the Credit Contracts and Consumer Finance Act (CCCFA) from October to December impacted market activity,” REINZ Chief Excutive Jen Baird says.

“Able to transact and keen to move before tougher lending restrictions were implemented, people come to market hard and fast, contributing to a sense of urgency that is reflected in REINZ property data for October last year and is apparent in our annual comparisons.

“In October 2022, the national median price decreased 7.5% compared to the same period last year. Four regions bucked the trend — with Marlborough reaching a record median price. It is worth noting while the region’s location and size mean it can be less affected by some market headwinds, the median price is more subject to variability than bigger regions due to the smaller volume of transactions. For example, in September, the region recorded its lowest median price since August 2021; this month, it hit a record high. Time will tell if this high is the new normal or an anomaly due to a relatively small number of sales.

“This year, several compounding factors have created uncertainty and hesitancy in the market where there was confidence and urgency last year — rising interest rates and the cost of living, tax legislation and property regulation, tightened lending criteria, and global events with macro-economic impacts.

“We see downward pressure on prices, and the pace of the market has come down. However, over the last couple of months, salespeople have observed an increase in enquiries and a noticeable increase in the number of first home buyers back in the market,” Baird observes. 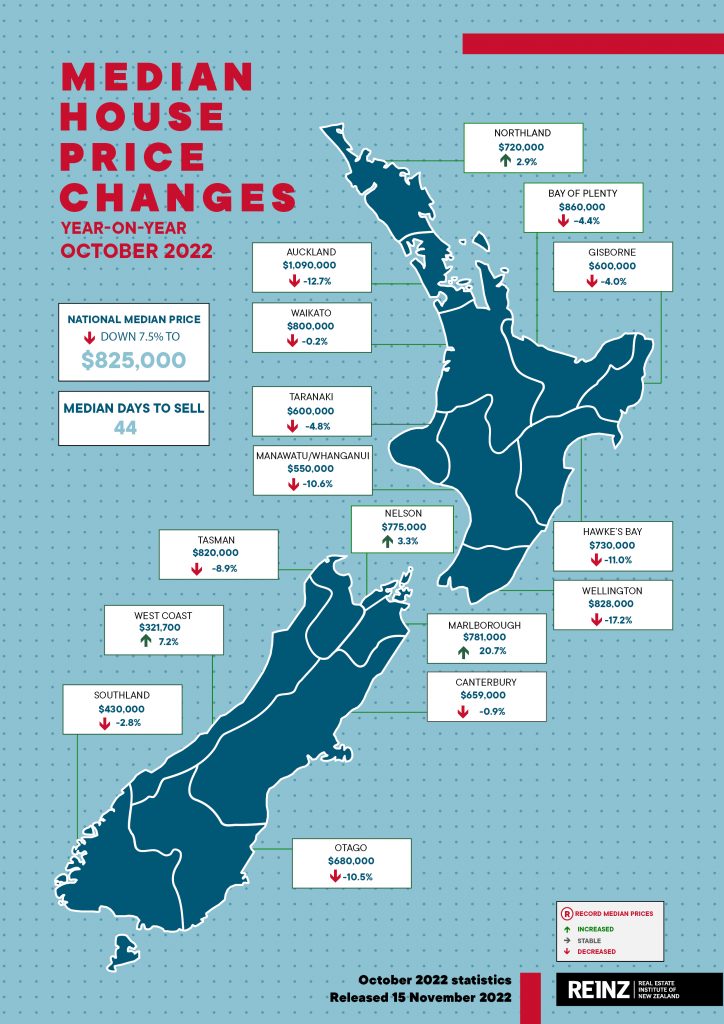 The regions with the greatest annual percentage decrease were:

“In September, the data showed the usual spring uplift was subdued – the story remains similar through October. Nationally, sales activity is down 34.7% year-on-year and 4.3% month-on-month.

“On an annual comparison, we’re comparing to a period of heightened activity. Month-on-month, looking at the actual numbers we see a 4.3% decrease in activity; however, adjusting for seasonality, we note sales are down 9.5% — October performed poorer than expected compared to September.

“Properties continue to change hands, and people continue to make life decisions. However, buyers and vendors are acting with caution, weighing up their options.

“There are signs of more buyers returning to the market. Owner occupiers — backed by equity — still dominate the market. But with an increase in property on the market, easing prices, and banks’ lending again, we see first home buyers dipping their toes in. While this is positive news, further increases in interest rates are putting a damper on buying plans in this buyer group, and we have yet to see their interest reflected in sales activity. Meanwhile, reports from salespeople across Aotearoa suggest investors continue to step back,” Baird observes.

“Annual inflation has hit 7.2%, and the Reserve Bank has increased the official cash rate to 3.5% and is expected to increase it to 4.0%, with some commentators suggesting 4.25%, by year’s end, with more increases to come in 2023. This means mortgage rates are yet to peak, and some banks are already increasing their fixed mortgage rates.”

Up 3.4% annually, Southland was the top-ranking region on the Index in October, followed by Northland (+1.6%). All other regions showed negative annual movement on the Index.

Wellington had the greatest decrease — down 19.7% compared to the same time last year — from 4,332 to 3,477. Wellington ranked bottom on the HPI annual movements for 11 consecutive months, and this month showed the greatest three-month drop in HPI movement, down 4.2%, followed by Manawatu/Whanganui, down 3.5%.

New Zealand’s median Days to Sell was 44 in October

Across New Zealand, the median number of days to sell (DTS) a property in October was 44 — up 10 days compared to October 2021. Month-on-month, properties were on the market three days fewer.

For New Zealand excluding Auckland, DTS increased 14 days to 44 — though down five days compared to September (49).

West Coast had the lowest DTS of all regions at 23, an annual decrease of 13 days. Manawatu/Whanganui had the highest median DTS at 54, followed closely by Bay of Plenty at 53.

New listings down, inventory up

Nationally, listings were down 4.0% annually to 9,289. New Zealand excluding Auckland saw an annual increase of 3.3%.

Gisborne had the greatest annual decrease in listings — down 21.9%.

“Taking New Zealand as a whole, listings were down 4.0% compared to the same period last year. However, nine regions saw an increase of listings coming onto the market — spring tends to be a preferred time to sell as people look to make their moves ahead of the holidays.

“More listings, more options and more people preferring to take their time to make purchasing decisions means properties are staying on the market for longer. The median days to sell now sitting at 47 — up 10 days on October last year but selling faster than September,” Baird observes.

Southland and Gisborne were the only regions to see inventory levels increase annually by less than 50% — up 38.5% and 23.1%, respectively.

Five regions had over double the inventory they had last year, with Nelson and Waikato again experiencing the greatest annual increases in inventory levels — at 184.2% and 142.2%, respectively.

“Stock levels were up 74.7% compared to October 2021. All regions have more property for sale, putting downward pressure on prices.

“For owners looking to sell, this consideration will impact their decision-making. For those motivated to sell, working with a real estate professional who knows the local market will ensure you have the right strategy to achieve a sale you’re happy with,” Baird concludes.