The government will repurpose its ultrafast broadband company and join forces with local councils and private investors to co-invest up to $600 million in network infrastructure for big new housing developments. 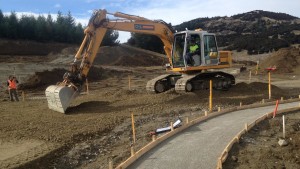 Crown Infrastructure Partners will establish special-purpose companies to build and own new trunk infrastructure for housing developments in return for dedicated long-term revenue streams from councils through “targeted rates” and “volumetric charging” of new residents.

“This innovative new funding method will be made available to cash-strapped councils who are struggling to fund new long-term infrastructure from their own balance sheets,” Local Government Minister Anne Tolley adds.

“Councils will have the option of buying back the infrastructure at some point in the future, but won’t have to commit to doing so.

“This is all about introducing outside capital to build this infrastructure, so current ratepayers don’t get burdened with all the costs of growth.”

Two of the earliest projects to be assessed by Crown Infrastructure Partners for investment will be the Auckland North and Auckland South projects previously submitted by Auckland Council as requiring investment outside the council’s own balance sheet.

“These two large projects can provide an additional 5,500 homes in Wainui to the north of Auckland, and 17,800 homes across Pukekohe, Paerata and Drury to the south of the city,” Tolley says.

Joyce says the government is prepared to be an investor alongside the private sector and take up some of the early uptake risk.

“We learnt from the ultra-fast broadband programme that if we de-risk some of the early stages of the investment, we can bring in private sector investors to take on much of the heavy lifting as the investments mature,”  Joyce explains.

“We would expect the crown’s investment in each project to be matched with at least one to one with private sector investment over time.”

“This new model is another way in which we are helping councils in our fastest growing cities to open up more land supply so more Kiwis can achieve the goal of home ownership,”

Joyce says it forms part of a “comprehensive programme” for lifting housing supply to meet the needs of a “confident growing” country.

“Crown Infrastructure Partners is the logical next step in infrastructure funding following the Government’s Housing Infrastructure Fund which will deliver 60,000 houses across our fastest growing population centres over the next ten years,” he believes.

What is Crown Infrastructure Partners?

CIP is a Crown company (formerly Crown Fibre Holdings) that is being tasked with designing and implementing new commercial models to attract co-investment from the private or other sectors and achieve the government’s objectives for the efficient deployment of water and roading infrastructure to support the timely increase of housing supply.

The aim is to increase the total investment in local arterial roading and network water projects needed to make more housing development possible by tapping private sources of capital.

Why repurpose CFH as CIP?

A number of corporate structures were identified during the review phase. Establishing a Special Purposes Vehicle (SPV) that investors, councils and government have confidence in requires a high level of commercial and financial expertise. This expertise currently exists which CFH and since the Ultra-Fast Broadband programme is nearing completion (Phase 1 is 75 per cent complete), that work will start to wind down which means there is capacity to start this new project. In addition, repurposing an entity like CFH is significantly cheaper and more efficient than establishing a new entity.

What is the aim of CIP?

CIP will work to speed up housing developments. The aim is that by introducing different sources of capital, it will allow the infrastructure required for this growth to be brought forward earlier than would be possible if it was funded entirely from council balance sheets.

Some high-growth councils in New Zealand are constrained in their ability to take on further debt to invest in infrastructure. Many of these high-growth councils are near their borrowing limits, and so cannot finance the infrastructure investments needed to keep up with demand. This limits their ability to open up the supply of land for housing construction, which in turn feeds into higher house prices.

How will CIP speed up housing developments?

CIP will look at how crown investment through an SPV might be designed to bring forward the provision of infrastructure, particularly in these high-growth areas, to enable housing supply to be brought forward.

The advantage of the SPV model is that it allows land owners and developers to bring forward the infrastructure projects that would otherwise not have started for a number of years due to councils’ financial constraints. This is because a key feature of a SPV is that the debt it takes on is reflected on the SPV’s balance sheet, not the council’s. As such it does not affect councils’ debt limits, and frees up the local infrastructure funding bottleneck.

Why look for private capital instead of traditional rates funding?

Rates are tax levied against property owners to pay for the goods and services they receive from their local council. As such there are affordability and equity considerations that councils have to take into account when setting rates. For instance, it is not equitable to ask ratepayers to fully pay for long-term infrastructure today when it will be used by multiple generations. Most councils overcome this by accessing long-term debt, spreading the costs over the life of the asset. However, some councils’ ability to do this is constrained by their debt limits and limited borrowing capacity.

Is this just a tool for Auckland to use?

No. This model will be scalable and used in other fast-growing centres across New Zealand.

However, as most population growth pressures are concentrated in Auckland, the first SPV being explored will be within in New Zealand’s biggest city. Other councils will be eligible to apply to set up SPVs provided their projects meet certain criteria.

What are the SPV criteria?

CIP will develop these criteria over the next few months, but at a high level projects must show an ability to generate sufficient revenue to cover their own costs over time, including the cost of capital in most cases. They must also include an exit pathway to allow the crown to recoup its capital within a reasonable time period. Projects should include a mechanism through which external providers of capital can invest in infrastructure.

What investment opportunities are there in Auckland for CIP?

These projects did not receive HIF funding as they did not meet the specific criteria set by the government, such as falling within the current 10-year planning period, and they couldn’t be funded from within the council’s balance sheet using HIF funding. The characteristics of these projects make them highly suitable to fund roading and water infrastructure through and Special Purposes Vehicle (SPV).

Should projects proceed to completion, it is expected that combined they will open up sufficient land for the construction of 23,300 additional houses, taking total housing capacity in these areas to 28,300. The total infrastructure investment being sought is $588 million.

How big is the opportunity to the north of Auckland?

New urban areas in the north, including Silverdale, Wainui and Dairy Flat have been identified by Auckland Council as areas where greenfield housing development can be significantly expanded over the next 30 years, provided the necessary infrastructure is in place to support the expansion.

What infrastructure investments are needed in the north?

The north project focuses on Wainui, where the existing infrastructure can only support the construction of 2,000 new houses in the area zoned for residential use in the Auckland Unitary Plan. It is estimated that an infrastructure investment of $201 million ($149 million for transport; $52 million for water) could sufficiently increase infrastructure capacity to service up to another 5,500 houses in Wainui.

What water infrastructure developments would this cover in the north?

The estimated $52 million infrastructure investment in the north would pay for a number of water developments including the:

What transport infrastructure developments would this cover in the north?

The estimated $149 million infrastructure investment in the North would pay for a number of arterial transport developments, including the:

What is the opportunity in the south?

What infrastructure investments are needed in the south?

Although areas in the south have significant potential to expand greenfield housing capacity in Auckland, only 3,000 additional houses can be supported by the existing water and roading infrastructure.

It is estimated that an infrastructure investment of $387 million ($215 million for transport; $172 million for water) could increase the supply of new houses by 17,800 across Paerata, Pukekohe, Drury West and Drury South.

What water infrastructure developments would this cover in the south?

The estimated $172 million needed for water infrastructure in the south would pay for a number of developments including (but limited to) the:

What transport infrastructure developments would this cover in the South?

The estimated $215 million infrastructure investment in the South would pay for a number of transport developments, including the:

Why is Drury South being considered for the first SPV?

Drury South is one of the four areas (including Drury West, Paerata and Pukekohe) situated to the south of Auckland that has been identified as having the greatest opportunity to create new urban areas. Out of the four areas it is the most developed and is in near ready-to-go status, having already obtained planning permission, with the design and consenting expected to be complete in 2017. Should major civil works commence in October 2017 it is expected the project will be ready for the first occupants in 2019.

What will be built in Drury South?

The Drury South project being developed by Stevensons Group is an integrated development that will provide for more than 700 houses as well as an 180Ha business and industrial development adjacent to the Stevenson Drury Quarry. The business park will facilitate 15,400 jobs across the Auckland region, 5,000 of which will occur within the business park, which is expected to contribute $2.3 billion to the regional economy every year.

What transport infrastructure is needed in Drury?

To facilitate and accelerate development within the southern sector of the city, Auckland Council and NZTA are investigating the southern section of the Mill Road Corridor, a Primary Arterial Road/Expressway that will link Mill Road in Manukau with Pukekohe.

What water infrastructure investment is needed in Drury South?

The project requires new wastewater and freshwater connections. This includes a 4.5km trunk sewer between the project and Hingaia pump station north of Drury, and a new connection to the Waikato water pipeline in Drury. This infrastructure will be designed to integrate with other developments in the area and could service in excess of 10,000 households.

How much will it cost?

Civil works to deliver the land ready for development will total $300 million, of which an estimated $68 million in road and waste infrastructure will be assessed for CIP funding.