It was a big night for two North Island towns at the Annual Awards Gala Dinner in Auckland, where Century 21 New Zealand has announced its real estate winners for 2018 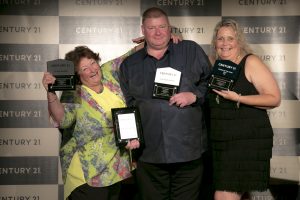 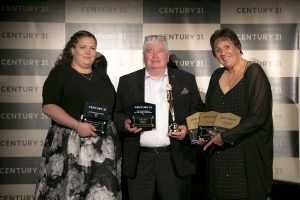 Roger Webb of Century 21 Premier (Turangi) was named Top Salesperson for the Year for Units (the number of properties listed and sold).

It was also revealed that in the fourth quarter of 2018 Roger Webb took out both Units and GCC (Gross Closed Commission) categories. This saw him finish the year as Century 21’s all-round leading salesperson across the country. He also took away the real estate company’s prestigious Centurion Award on the night.

“Roger is an absolute legend in and around Turangi. Not only does he understand the local market and achieve the best results but he’s part of a team at Century 21 Premier (Turangi) that remains very community-focused,” says Ryan Mitchell, National Manager of Century 21 New Zealand.

Franchise owner of Century 21 Premier (Turangi), Wai Johnson, says for a small town to take away national real estate awards is no mean feat when you’re up against big guns from the likes of Auckland and Wellington.

“Turangi has enjoyed a significant lift in house prices and demand in the past few years. Nonetheless it remains one of the most affordable areas in New Zealand. For Roger to achieve over $5 million in sales last year, and to list and sell the most properties for the company in 2018 highlights just how good he really is,” she says.

“We very proud of not only our market position, but we work hard to constantly give back by supporting local charities and volunteer services. In fact, we’re hosting an Easter charity auction and evening on 20 April to raise money for the Greenlea Rescue Helicopter. And rest assured we’ll be putting Roger Webb’s auctioneering skills to good use,” says Wai Johnson.

At the same time, local star Molly McLean was given the inaugural Recognition Award, acknowledging her significant contribution and team support as Office Administrator at Century 21 Premier (Turangi) for nearly five years.

Another small town up the road, Huntly had a great night. The North Waikato town featured prominently in both Century 21 New Zealand’s fourth quarter and annual awards.

Based on Huntly’s Main Street, Century 21 Rural and Residential Real Estate was awarded Top Office for the Quarter for Units (the number of properties listed and sold), beating all other Century 21 offices in New Zealand including those in Auckland and Wellington.

Co-owner of the Huntly franchise Ian Pepper won Top Principal for the Quarter for both Units and GCC (Gross Closed Commission) categories.

Mr Pepper also received Century’s 21 only Platinum Award for the fourth quarter in recognition of his considerable sales success. Huntly co-owner and salesperson Barbara Craig took out the company’s Silver Award for the quarter.

On the night both Ian Pepper and Barbara Craig were singled out as two of Century 21’s leading salespeople across the country for 2018. While New Zealand Rookie of the Year went to rising Huntly star Century 21 Rural & Residential salesperson, Pescha Eccles.

“I am so grateful to everyone in our office who made our success possible, delivering Huntly recognition Australasian-wide. We’re an effective team who are passionate about North Waikato real estate, property management, and serving the local community,” says Ian Pepper

“It was great to be in Auckland to collect these national awards and be among some real estate legends including chairman and owner of Century 21 Australasia Charles Tarbey. I want to pay particular tribute to my business partner Barbara Craig who is key to our ongoing success. It was a wonderful night for Huntly,” he says.

“Huntly had a particularly strong fourth quarter and a great year overall. Century 21 Rural & Residential is one of our strongest offices nationwide. They can all be incredibly proud,” says Ryan Mitchell, National Manager of Century 21 New Zealand.

“These awards bode very well for Huntly’s ongoing success in 2019. And there’s plenty to look forward to when you consider the underlying strength of North Waikato’s real estate market and everything the area has going for it,” says Mr Mitchell.