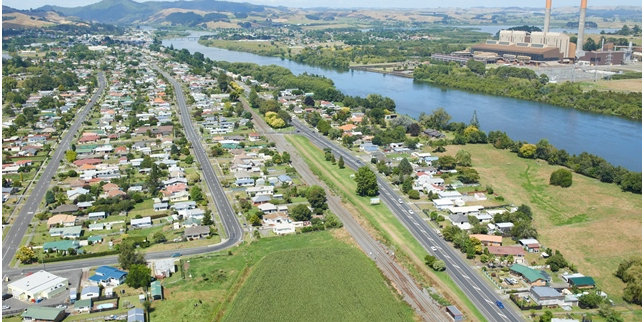 Waikato median house prices continue to enjoy good growth. Good sales volumes have also been achieved, with the number of houses sold in Waikato in July leaping into the top three, along with Auckland and Canterbury, according to REINZ.

As REINZ has observed this year, there are plenty of people moving from the big cities and centres to Waikato for its employment opportunities, not to mention the lifestyle.

For Huntly, like many of New Zealand’s smaller towns that are in commuter proximity to much larger cities, the future only looks bright. As well as having Auckland just an hour or so up the motorway, Hamilton is only about 30 minutes down the road.

Planned to open next year, a new section of the Waikato Expressway will divert considerable SH1 traffic away from the township. Traffic congestion within the Huntly community will be substantially reduced, which will be particularly noticeable during the holidays when traffic through Huntly has often been at a standstill.

“We’re really excited. We’re going to get our town back. For too long we’ve been a thoroughfare for people trekking back and forth to Auckland. Now Huntly’s got a chance to become a real destination, exuding character and community,” says local franchise owner Ian Pepper.

The train service is also due to start in 2020, giving commuters a much more relaxing option. Two return services will operate each weekday at peak travel times, with one return service on Saturday. The route will start at Frankton in Hamilton, stopping at The Base before going onto Huntly and stopping finally at Papakura.

Then there’s the well-known Kiwi bed brand, Sleepyhead. Its owners intend to create a manufacturing hub in Ohinewai, just north of Huntly. But it’s not just the 1,500 new jobs the hub is expected to create. Over the next decade, 1,100 new homes are also planned to be built there.

Sleepyhead’s owners have already purchased 176-hectares of land, adjoining the existing Ohinewai village, to be transformed into a mixed-use, fully master-planned community of up to 3,000 residents.

The Waikato District Council is tasked with managing growth within its area which is largely north and west of Hamilton. The district’s growth is expected to swell from 73,600 people to possibly 103,000 by 2045, while regional unemployment remains lower than the national average.

Barbara Craig says real estate interest and activity in Huntly township itself has noticeably lifted in the last year or two and rentals in and around Huntly are now scarce.

“Let’s just say if anyone has rental property, we could sure rent it out for a good return. In fact, rents in Huntly appear to be higher than Hamilton in many cases. A few years back we could never have imagined just how popular little old Huntly would become, but we’ll take it with open arms! It’s an exciting time,” says Ms Craig.