A Norwegian architecture firm has created a zero emission house that produces pluses – not the least excess energy. 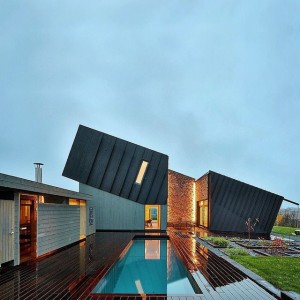 The ZEB Pilot House created by Snøhetta in conjunction with the Research Center on Zero Emission Buildings produces enough energy to drive an electric car for 12,500 miles.

Most of this energy is generated through the solar panel roof, which is tilted at a 19-degree angle towards the southeast to capture as much light as possible.

A 45-degree angle would have actually been the optimum position, but the architects felt that would have made the house “cartoonish” in scale and difficult to build.

However, the tilted roof can be modified and applied to other buildings in new orientations – southern hemisphere homes, for example, would need to tilt north.

Buildings with different functions might want to capitalise on certain times of day – for example, an office building would need to harvest more electricity during the day when the computers are running.

The ZEB house also makes maximum use of connected home gadgets as solar energy is most efficient when used in real time – when panels are harvesting electricity.

Turning on the washing machine using a smartphone while at work, for example, means the house can power itself off available daylight, rather than stored energy.

Similarly, smart thermostats can conserve electricity to optimise heating when families are home – especially when used with a heat exchange system connected to the home’s grey water recycling system.

Internally, the ZEB Pilot House includes a series of organic, energy-saving touches such as beeswax-laminated aspen wood in the bedrooms, the wax reacting with natural moisture in the air to help keep the room temperature steady.

The concrete and bricks supporting the solar roof came from the Internet and can naturally trap heat and cool air, conserving some energy from the house’s heating and cooling system.

t employs a single geothermal well at 100m depth coupled to a heat pump, providing around 80 per cent of the waterborne heating requirements; the remainder made up of solar collectors and heat energy reclaim. There is also an alternate 150 metre earth circuit at one metre depth, providing similar efficiency.

All this innovation comes at a cost, however. The ZEB Pilot House costs about 25 per cent more than ordinary houses but the excess is recoupled relatively quickly given the longer life cycle and associated fuel savings.

Share. Twitter Facebook Google+ LinkedIn Email
Previous ArticleMake the most of life by being mindful
Next Article Major NZTech cyber security summit to prepare against attacks