January saw 14 out of 16 regions experience annual increases in the median price for residential properties, including 5 new record median prices, while Auckland and Canterbury saw prices fall, according to the latest data from the Real Estate Institute of New Zealand (REINZ) 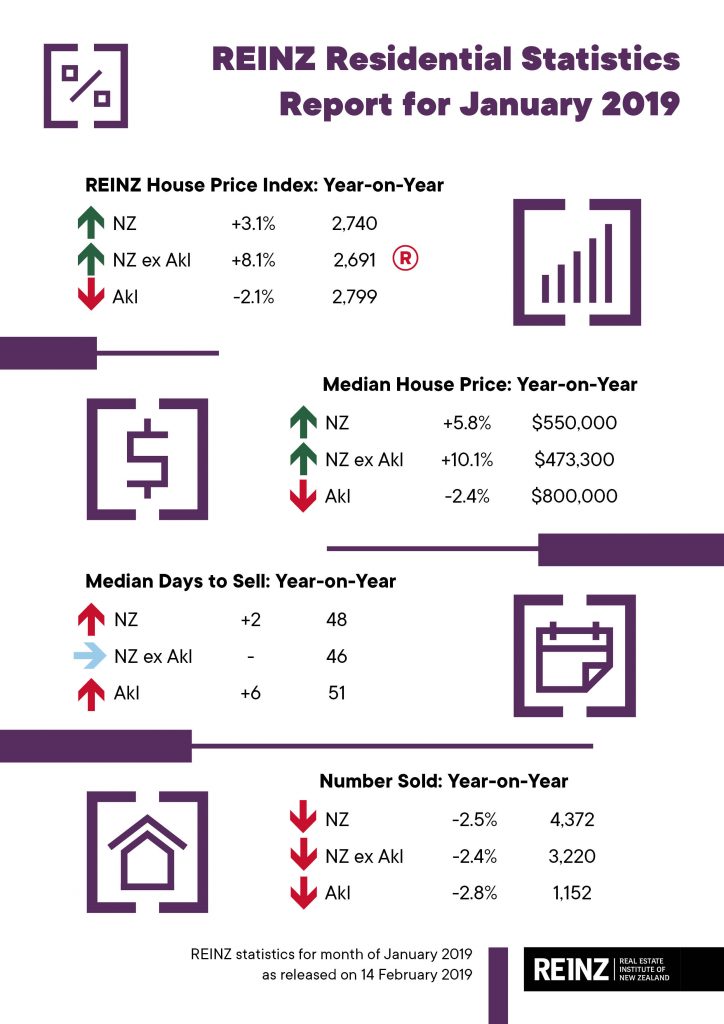 Outside of those records, regions with the biggest annual increase in median price were:

Bindi Norwell, Chief Executive at REINZ says: “January has pointed to a two-tier market continuing around the country with Auckland and Canterbury experiencing a slow down in price, but the rest of the country has seen strong price growth, including five regions achieving record median prices. This increase in price once again highlights how the lack of supply is continuing to push up house prices, therefore, it’s essential that as a country we address this fundamental issue sooner rather than later.

“From an Auckland perspective, the median house price in January of $800,000 was the lowest we’ve seen for 35 months with falls across Franklin, Rodney, North Shore and Papakura districts during the month ranging from -0.7% to -13.2%. However, Auckland City, Manukau City and Waitakere City all saw annual increases of between 1.5% and 9.5% showing that there are pockets of growth occurring across the region. December and January usually see prices decline and then pick up again in February and March, so we’ll be watching closely to see whether this is just the usual Christmas/New Year slowdown or whether this is the start of something wider. What we can say, is that it’s too early to call this a trend and it’s too early to confirm whether the Auckland market has actually turned,” says Norwell. 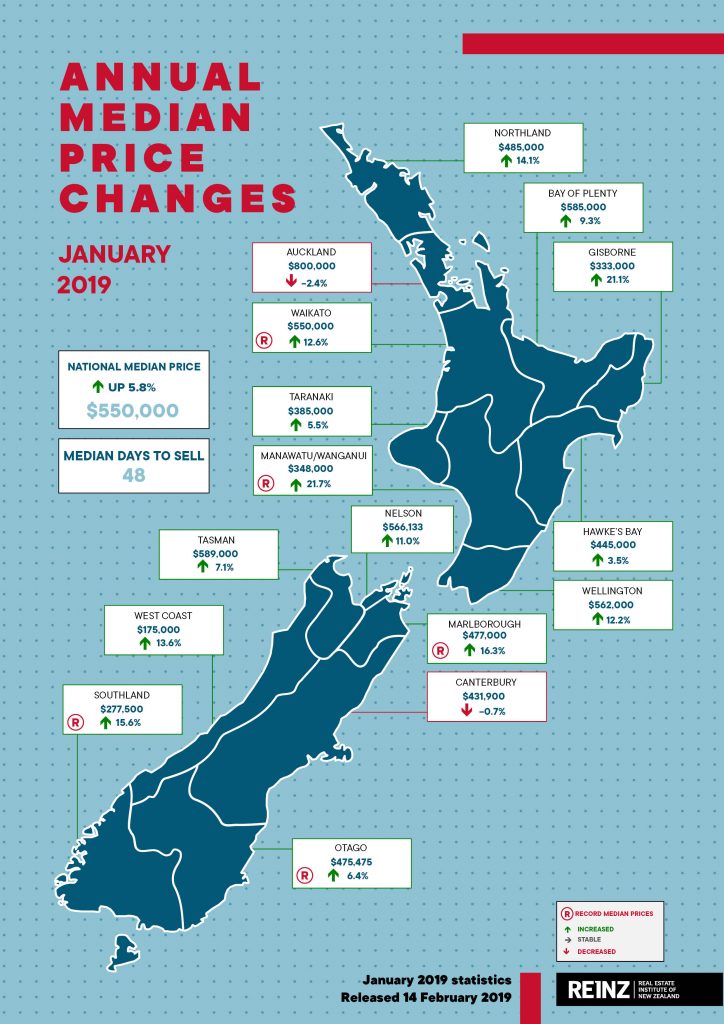 New Zealand’s third warmest January on record saw Kiwis heading to the beaches rather than to open homes meaning that the number of residential properties sold during January fell by -2.5% year-on-year. During January, 4,372 homes sold, which is 112 fewer than the same time last year making it the lowest number of properties sold in 24 months.

In Auckland, the number of properties sold decreased by -2.8% year-on-year to 1,152 and was the lowest for 2 years.

Regions with the largest annual fall in volumes were:

However, there were some regions that saw an annual increase in sales volumes during January including:

“January is normally a very quiet month in terms of real estate sales as much of New Zealand heads to the beach to unwind after Christmas. However, following a slow December, January has also been very quiet from a sales volume perspective with the number of properties sold across the country the lowest in 24 months. We’ve also had the new Anti-Money legislation apply from 1 January which has had a strong impact on the volume of sales as the market adjusts to the changes.

“However, there were some areas that bucked the trend with 7 regions seeing an annual increase and Tasman and the Bay of Plenty seeing double-digit increases in the number of properties sold during January,” continues Norwell.

“While we’ve had two months of lower sales volumes, as people head back to work and schools and universities open their doors for learning, the real estate market tends to pick up again and return to normal. This is something we’d expect to see again this year with no signs yet pointing to a significant, longer term decline in sales volumes,” points out Norwell.

The REINZ House Price Index for New Zealand, which measures the changing value of property in the market, increased 3.1% year-on-year to 2,740. This is down -0.5% from its peak in October last year.

The REINZ HPI saw 10 out of 12 regions experience an increase over the past 12 months, highlighting the overall continued strength of the property market. The exceptions were Auckland and Canterbury.

For New Zealand excluding Auckland, the median days to sell remained steady at 46.

Marlborough had the lowest days to sell of all regions at 33 days, down from 42 at the same time last year.

January sees lowest percentage of sales by auctions in 8 years

Auctions were used in 4.6% of all sales across the country in January, with 203 properties selling under the hammer – this is down from the same time last year, when 5.5% of properties (248) were sold via auction. This is the lowest percentage of sales by auction for 8 years.

Once again, Gisborne had the highest percentage of sales by auction across the country with 20.7% (or 6 properties) in the region sold under the hammer – up from 7.9% (3 properties) in January 2018.

Bay of Plenty saw the second largest percentage of sales by auction on 10.1% (35 properties) up from 9.9% in January 2018 (31 properties). Auckland took the spot of having the third highest level of auctions in the country with 7.4% (85 properties) sold under the hammer, down from 12.1% (143 properties) for the same period last year.

January saw 5 regions with an annual increase in inventory levels. Regions with the largest increases were:

Regions with the biggest falls in inventory were:

“Inventory levels continue to be of concern at the moment for the industry, particularly with four regions having less than 10 weeks’ inventory available. These low levels of inventory will continue to push prices up in these regions and are likely to cause people to have to look further out for affordable properties,” concludes Norwell. 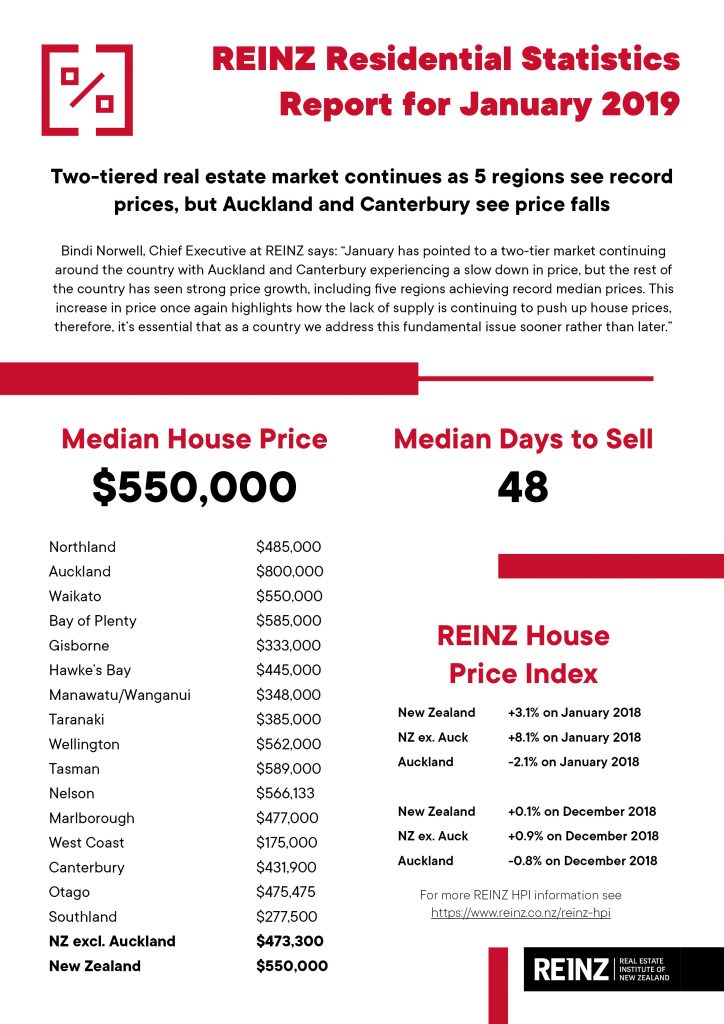 Share. Twitter Facebook Google+ LinkedIn Email
Previous ArticleDunedin set to remain the jewel of the south
Next Article What the Reserve Bank’s decision means for the property market