The Auckland council has declined to say which buildings are affected, but does say they are privately-owned and the material is being replaced with fire-proof cladding. 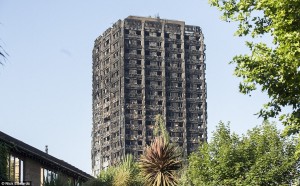 Aluminium composite panels (ACP) with a polyethylene (PE) core are suspected to be behind the rapid spread of London’s fatal apartment block fire, and another 600 UK buildings are being urgently tested.

The only one of New Zealand’s three biggest cities to have investigated the cladding issue, Auckland Council initially said last week that it had found no examples of its use in the city.

However, it has now admitted that it has found at least two buildings over 25m high with PE panels.

The buildings, which both have sprinklers, were in the process of being “remediated with a fire-rated cladding system”, the council said.

The council is continuing to check some 88 other buildings, but the search is being hampered by the fact that the database could not search by cladding type.

Auckland Council began checking its buildings after a briefing in February last year about the 2014 Docklands fire in Australia, which identified 10 big ACP high-rise cladding fires since 2007.

The council said when it realised fire regulations allowed the combustible ACP on buildings up to 25m tall, it petitioned the ministry to tighten the rules.

Announced in January, new restrictions kicked in just three weeks ago to limit the use of aluminium composite panels to buildings under 7m high, which would be one or two storeys.

The latest findings fly in the face of Building and Construction Minister Nick Smith’s reassurance last week that his officials were “reasonably confident”the combustible panels “have not been used in high-rise structures” in New Zealand.

Smith claims he was advised last year that “we had no evidence it was being used” but decided to “get ahead of the curve” and order restrictions.

Dr Smith said it was “a fair question as to whether there were any multi-storey structures built with this cladding type prior to the regulation change”.

“The advice I had at the time was they thought it was unlikely because these products had not got a hold or been significantly used in high-rise structures prior to us making the regulation,” he said.

“I have asked the Ministry of Business, Innovation and Employment to contact councils and check whether any high-rise buildings have been constructed with these materials prior to the amendments earlier this year.”

Neither Wellington nor Christchurch had done any investigation into the panels until being asked to do so by government officials.

However, the combustible panels look no different from the fire-rated version and consent paperwork could be unreliable, meaning any inspection might have to take a sample and test it to be certain.

“Our building regulations need to keep pace with this change in living styles and ensure that New Zealand never experiences what occurred at the Grenfell Tower in London.”

He says the government is “further tightening” the fire safety requirements for high-rise buildings with proposals put out for consultation in May.

“These proposals clarify the responsibilities between structural and fire engineers, tighten the verification methods for claddings and fire-fighting provisions such as water supply and location of fire hydrants in the building and improve the process for the development of alternative solutions.

“We will be watching the detailed inquiries into the London disaster to see whether there are any issues relevant to New Zealand’s building and fire regulations.

“We always need to be on the lookout for ways to improve public safety.”