The number of residential properties sold in February fell by 9.5% from the same time last year to 5,954 (down from 6,576) according to the latest data from the Real Estate Institute of New Zealand (REINZ) 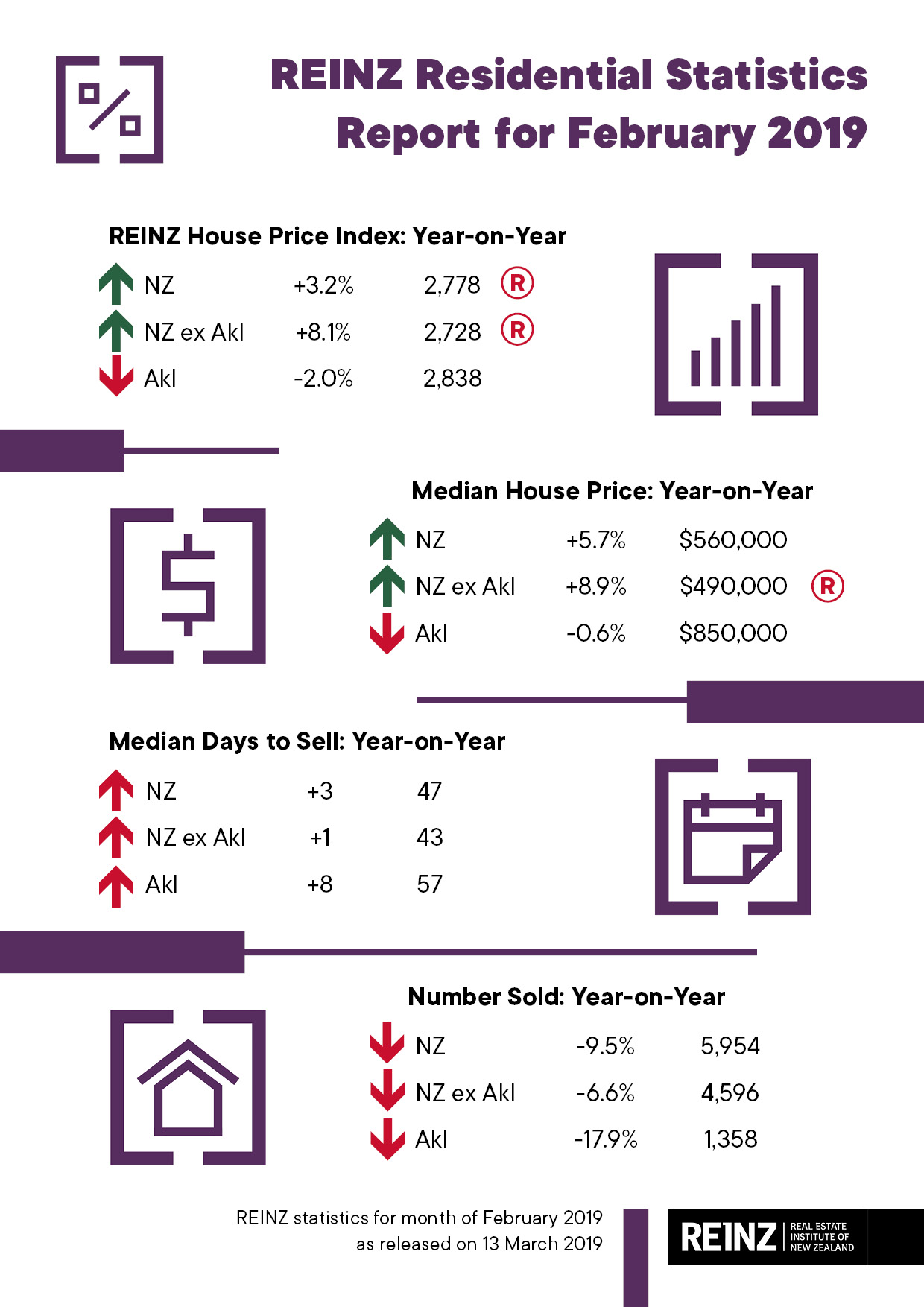 The last time sales volumes fell this much on an annual basis was 16 months ago.

For New Zealand excluding Auckland, the number of properties sold fell by 6.6% when compared to the same time last year (from 4,922 to 4,596).

Regions with the lowest percentage change in annual sales volumes during February were:

Regions that saw an annual increase in sales volumes during February were:

Bindi Norwell, Chief Executive at REINZ says: “At a time when sales volumes are normally strong, when we look across the country, 13 out of 16 regions actually saw an annual fall in the number of properties sold. Traditionally children go back to school and people return from their holidays and housing activity picks up, however, February 2019 has been an exception to this rule.

“The lower level of sales volumes compared to the same time last year can be attributed to a number of things – the raft of legislative changes impacting the housing market at the moment, the increasing difficulty in accessing finance (despite a record low OCR and very low mortgage rates from the banks) and vendors’ pricing expectations.

“What we’re hearing from salespeople around the country is that vendors and investors are taking a ‘wait and see’ approach to the housing market – much like you would normally see around election time. This is particularly true in relation to the recently announced Capital Gains Tax proposals from the Tax Working Group. Families want to know what aspects of the proposals the Government will look at accept ahead of next year’s election and what impact that will have on them and their family,” continues Norwell.

There were five regions that saw record median prices achieved in February:

“February saw 15 out of 16 regions experience an annual increase in the median price, with 5 regions seeing record median house prices highlighting the strength of the housing market around much of the country. With house prices continuing to rise at such a pace, this puts even more of a dampener on any notions of New Zealand following in Australia’s footsteps in the short to medium term. Even Auckland saw an increase from January, showing it has returned to the same, stable or flat market we’ve been seeing since April 2017,” points out Norwell.

“Auckland’s median price fall was the result of a slight fall in the number of million dollar plus properties sold which fell from 36.9% in February 2018 to 36.1% this February. Despite the annual fall in median price, there were some areas of the Super City that saw some growth including Auckland City where prices increased 3.9% to $1,000,000 – the highest price for Auckland City for 20 months. Additionally, Papakura District saw an annual increase of 3.8% to $649,000 and Franklin District saw an annual increase of 2.3% to $670,000. However, Rodney District and North Shore City saw annual median house price falls of 0.8% and 0.2% respectively,” continues Norwell. 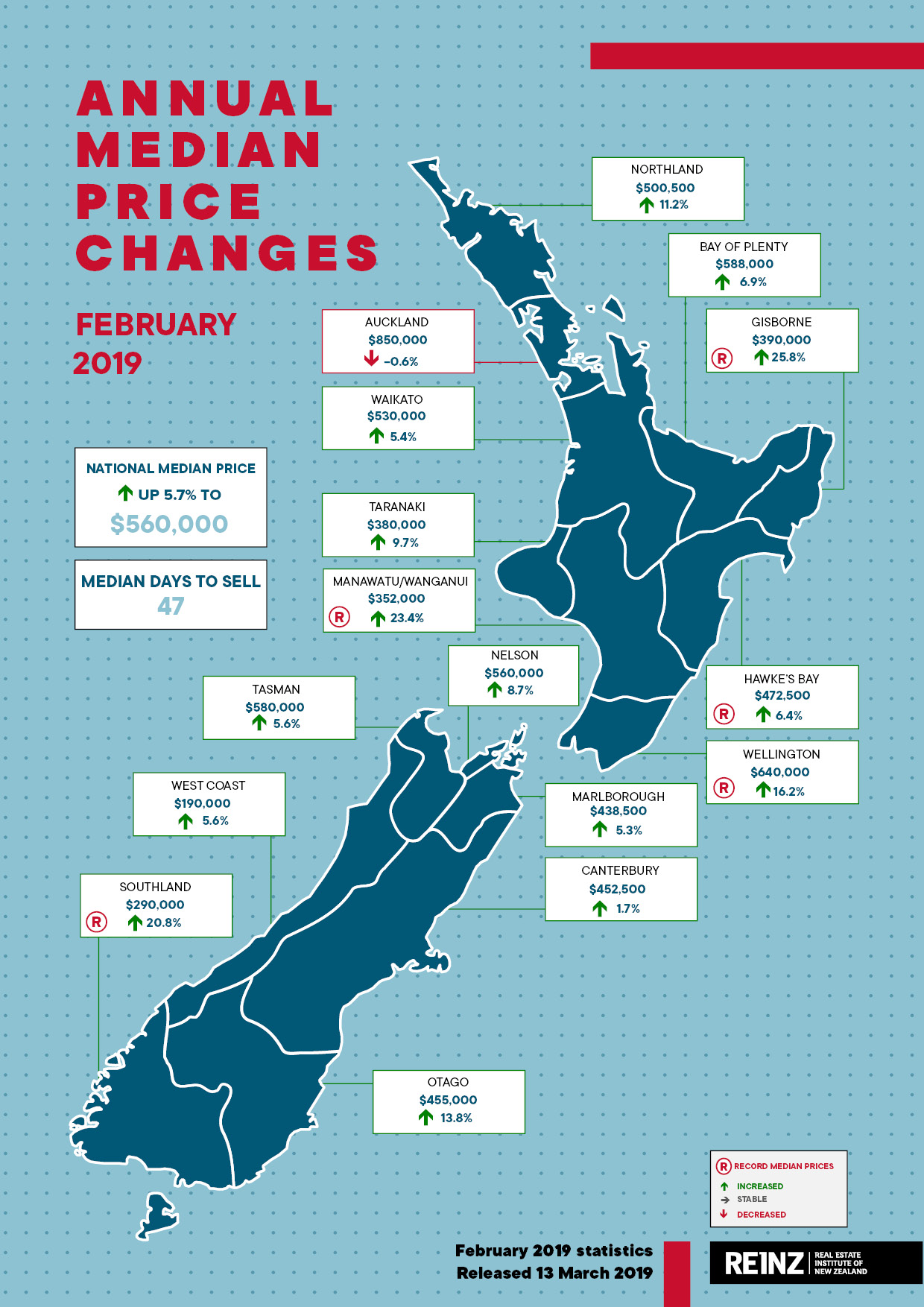 The REINZ House Price Index for New Zealand, which measures the changing value of property in the market, increased 3.2% year-on-year to a new record high of 2,778.

The REINZ HPI saw 8 out of 12 regions experience a record high level over the past 12 months, highlighting the overall continued strength of the property market. The exceptions were Northland, Auckland, Otago and Southland.

Days to Sell continues to hover close to 50

In February the median number of days to sell a property increased by 3 days from 44 to 47 when compared to February last year.

For New Zealand excluding Auckland, the median days to sell increased by 1 day to 43.

Auctions were used in 11.1% of all sales across the country in February, with 663 properties selling under the hammer – this is down slightly from the same time last year, when 11.8% of properties (776) were sold via auction.

Gisborne again had the highest percentage of sales by auction across the country with 56.4% (or 31 properties) in the region sold under the hammer – up from 46.0% (29 properties) in February 2018.

February saw 7 regions with an annual increase in inventory levels. Regions with the largest increases were:

Regions with the biggest falls in inventory were:

“This is the fourth consecutive month that we have seen an annual decrease in inventory levels. This will continue to be a concern for the industry, and we expect that the ongoing pressure on inventory will result in price increases in these regions, potentially pushing people to more affordable areas in other regions,” concludes Norwell.

Vanessa Taylor, realestate.co.nz spokesperson says: “February 2019 was very quiet in terms of new listings. Since we began keeping records back in 2007, February has always seen in excess of 12,000 new listings coming to the market, so this has certainly been a stand out month.” 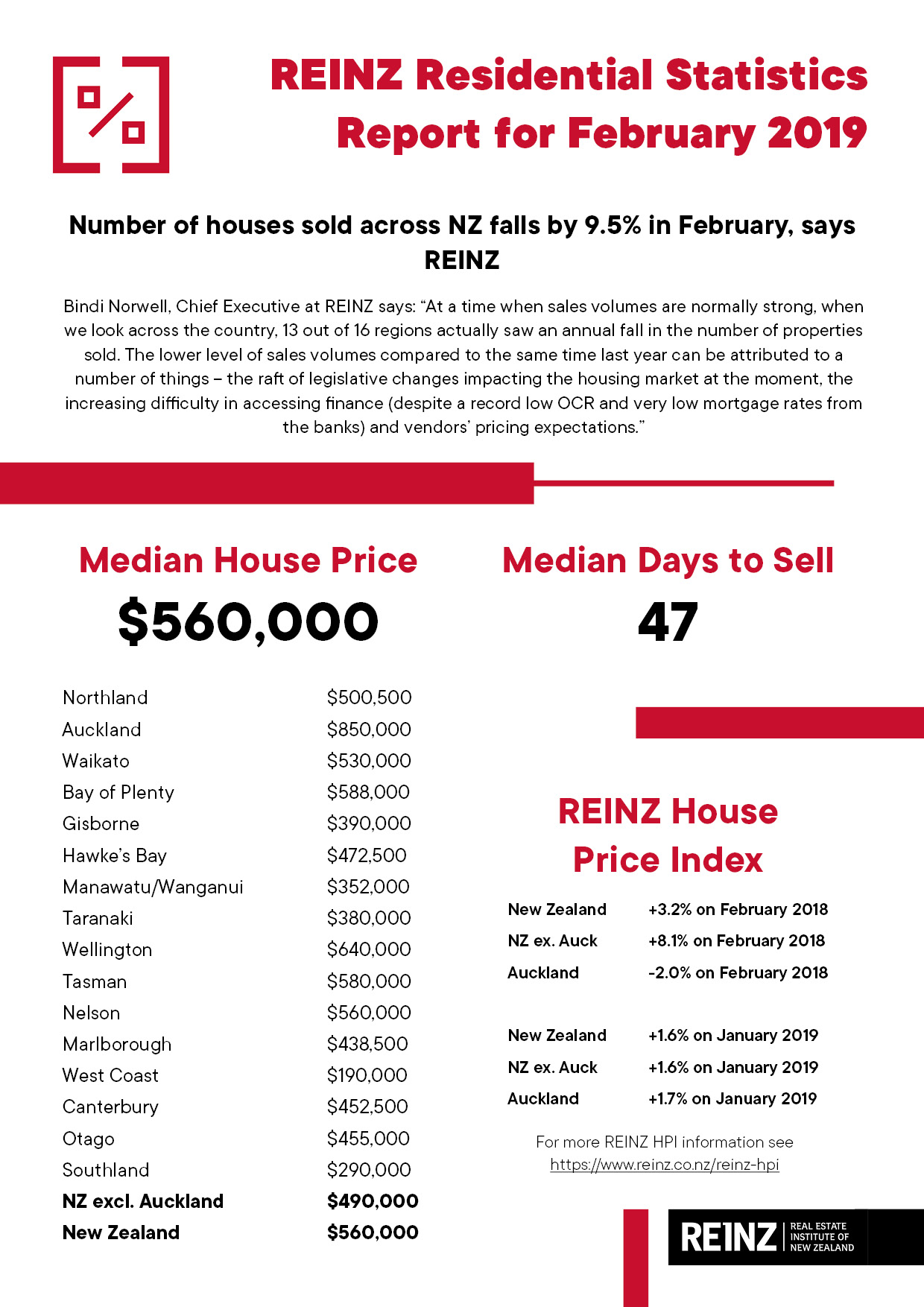