Four regions hit new record high median sale prices in July, with the national median sale price rising by $5,000 to $505,000, only $1,000 shy of the record median price reached in May 2016, according to the latest data from the Real Estate Institute of New Zealand (REINZ). 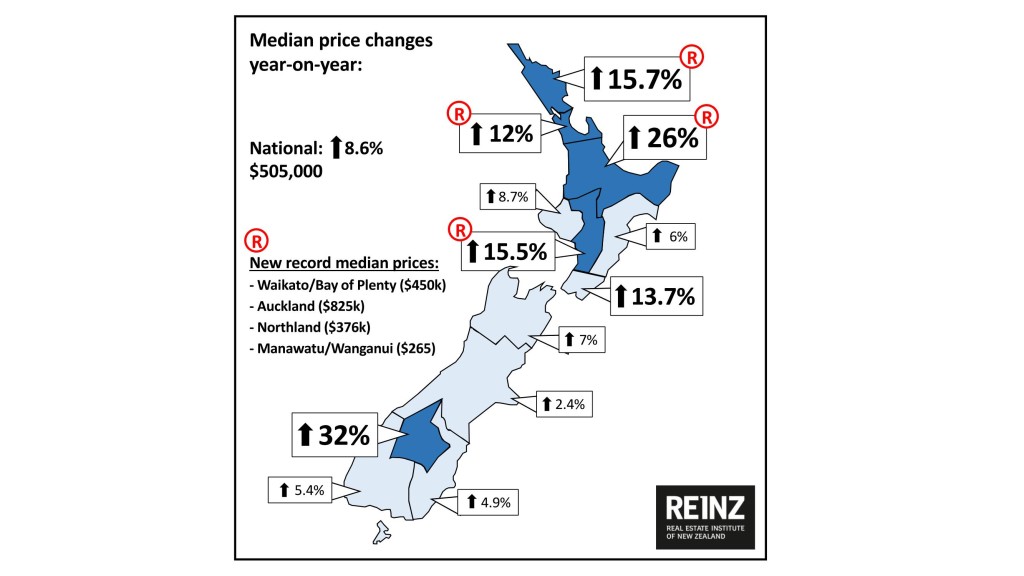 Inventory continues to fall rapidly nationwide, with a 33% decline in properties available for sale year-on-year and six regions seeing falls of greater than 40%.  Wellington and Hawke’s Bay each have less than 10 weeks of supply available, with Waikato/Bay of Plenty at just on 10 weeks’ supply.

Real Estate Institute of New Zealand (REINZ) spokesperson Bryan Thomson says prices continue to rise in many regions, showing that demand is still firm. “Sales volumes remain below previous periods, as the continued shortage of supply impacts buyers, who are struggling to find properties to buy. We will watch market reaction with interest as the expected increase in listing numbers during the spring and summer selling period become available and the market assesses the impact of the recently announced LVR rule changes, the approval or otherwise of the Auckland Unitary Plan and possible interest rate cut.”

“We understand that it must get very confusing for people with so much data available on the real estate market. The key thing is to watch the trends over time, and particularly the seasonally adjusted numbers, as they take month-by-month changes out of the equation and focus on how the market is really moving.”

This takes into account low levels of available inventory across the Auckland region, which have increased slightly, but are still at historic lows of below 10 weeks supply.

Auction sales up in the regions year-on-year, down in Auckland

Against a backdrop of reduced nationwide property listings, 1,674 dwellings were sold by auction nationally in July, representing 23% of all sales, a decrease of 221 (-12%) on the number of auctions in July 2015.

Pressure on stock grows, inventory and days to sell falls

The number of properties available for sale across all regions in New Zealand has continued to fall between July 2015 and July 2016.  Wellington has the fewest properties for sale with just under six weeks of supply, closely followed by Hawke’s Bay with nine weeks’ supply and Auckland and Waikato/Bay of Plenty with 10 weeks.