House prices have continued to surpass predictions for how they would perform post-COVID, with median house prices across New Zealand increasing to $639,000, according to the latest data from the Real Estate Institute of New Zealand (REINZ) 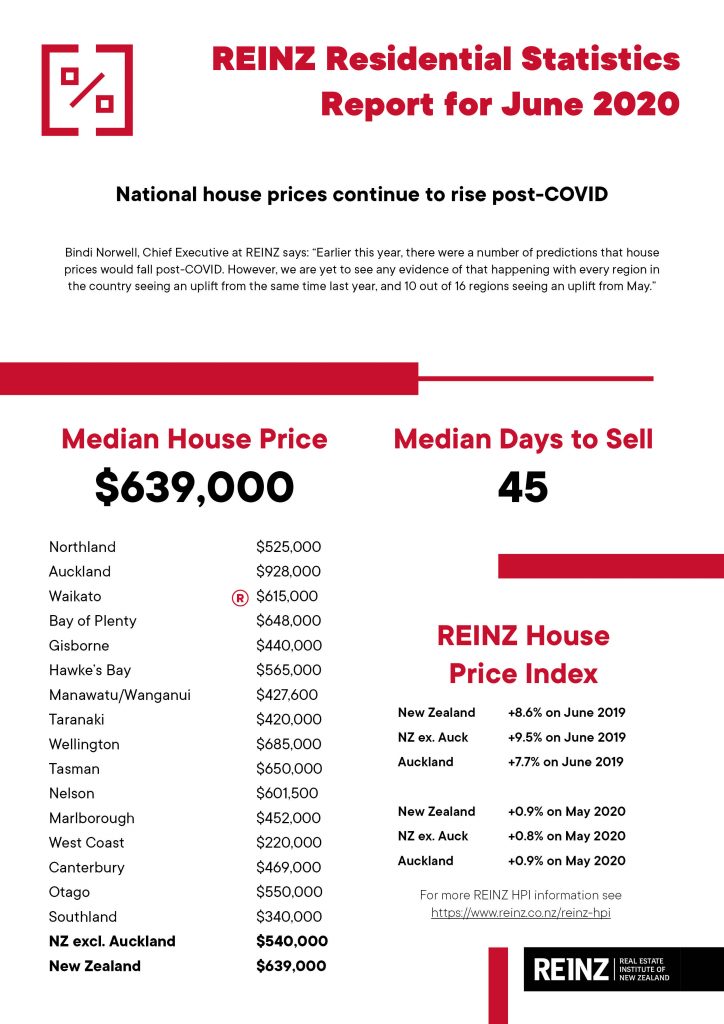 June marks 105 months in a row of year-on-year median prices increases for the country.

Bindi Norwell, Chief Executive at REINZ says: “Earlier this year, there were a number of predictions that house prices would fall post-COVID. However, we are yet to see any evidence of that happening with every region in the country seeing an uplift from the same time last year, and 10 out of 16 regions seeing an uplift from May.

“With wage subsidies and mortgage ‘holidays’ still firmly in place, and demand for good property exceeding supply, we wouldn’t be so bold as to say there won’t be an easing of pricing in the coming months when these support mechanisms come to an end. But right now, Kiwis’ love affair with property continues unabated – especially with the low interest rates we currently have in the market,” she continues.

“The Waikato region was the only region in the country with a record median price in June, a 17.1% increase year-on-year to $615,000 up from $525,000. With an 18.3 percentage point uplift in sales over the $500,000 mark when compared to the same time last year, and a strong level of increase from Auckland buyers, it’s little surprise that median prices have seen such a rise,” says Norwell. Most properties sold in the month of June for 4 years

For New Zealand excluding Auckland, the number of properties sold increased by 6.2% when compared to the same time last year (from 4,306 to 4,571) – the highest for the month of June in 4 years.

Shaking off the COVID-19 impact, June was the first time in three months where regions have started to see increases in annual sales volumes, with 10 out of 16 regions seeing annual increases.

Regions with the largest increase in annual sales volumes during June were:

“Not only did sales volumes return to ‘normal’ in June, they were the highest for a June month in four years suggesting that the impact of lockdown is now well and truly behind the country, and that people have been able to get on with their sales and purchasing decisions as per usual,“ says Norwell.

“With thousands of New Zealanders returning home as a result of New Zealand’s limited cases of COVID-19, many of these individuals are looking to purchase property for their family to live in which is also likely to have bolstered June’s sales volumes,” points out Norwell.

“However, we’ve said it before, and it’s important to say it again, that this may well be a post-lockdown peak in activity levels. There are concerns that with the wage subsidies, mortgage holidays ending and an election in September, that there may be a potential trough in activity levels in the coming months,” she warns.

“Although, with a 19.7% increase in new listings in June – the highest for the month of June in 4 years – hopefully this will lead to more choice for buyers in the coming months,” continues Norwell.

The REINZ House Price Index for New Zealand, which measures the changing value of property in the market, increased 8.6% year-on-year to 2,991.

Looking at the month-on-month shifts to help gain a clearer picture of how the underlying value of the market is recovering from COVID-19, there were three new record high index levels recorded in June, with 9 of the 12 regions recording a month-on-month increase. The only exceptions to this were Northland (-0.7%), Bay of Plenty (-0.7%) and Otago (-1.0%).

The 1-month data showed that the underlying value in the market has mostly held strong and begun to recover compared to May. The HPI for the country increased 0.9%, for New Zealand excluding Auckland it increased 0.8% and Auckland’s HPI rose 0.9% compared to May.

Days to sell returning to a more normal level

In June, the median number of days to sell a property nationally increased 4 days from 41 to 45 when compared to June 2019, although it was down from 58 days in May.

For New Zealand excluding Auckland, the median days to sell increased by 3 days from 39 to 42, but again was down from 57 days in May.

Auckland saw the median number of days to sell a property increase by 9 days from 46 to 55 year-on-year, also down from the 62 days seen in May.

The West Coast had the highest days to sell at 96 days, up 43 days on May’s figure and likely due to delayed sales from pre-COVID.

Looking at the regions as a whole, 13 out of 16 regions decreased month-on-month when it came to days to sell, with the only exceptions being Northland (up 9 days on May), Bay of Plenty (up 12 days on May) and West Coast (up 43 days on May).

“After last month’s high median number of days to sell a property, we were expecting a return to a more normal winter pattern over the next few months and it seems we are starting to see that already,” concludes Norwell.

Auctions were used in 11.1% of all sales across the country in June, with 733 properties selling under the hammer – up from 10.0% at the same time last year, when 618 properties were sold via auction –indicating a return to a more normal level of auctions after a few months of restrictions. 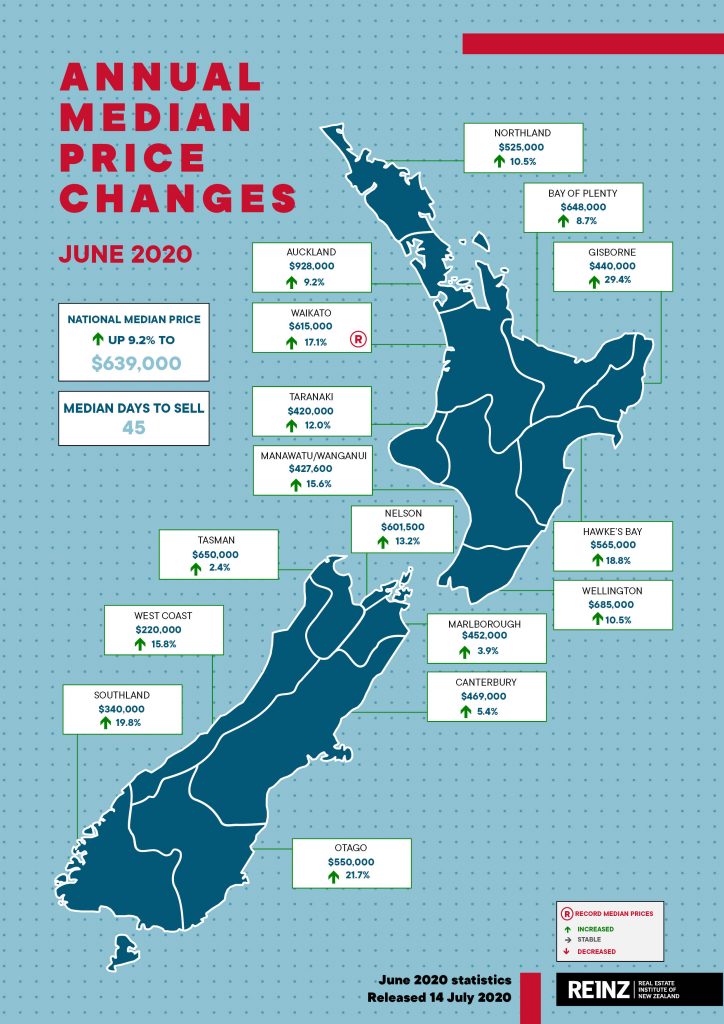 Inventory falls for 12 months in a row

The total number of properties available for sale nationally decreased by -11.7% in June to 20,772 down from 23,519 in June 2019 – a decrease of 2,747 properties compared to 12 months ago and the lowest level of inventory for the month of June since records began.

“The underlying strength of New Zealand real estate continues to prove itself. Overall, it remains well up on last year, and comfortably up on the previous month. Any pundits preaching doom and gloom back in March and April are still miles off being proven right,” says Derryn Mayne, Owner of Century 21 New Zealand.

“Amazingly, every region has seen an increase on 12 months ago, with 10 out of 16 regions lifting since May. The fact that the wider Waikato region achieved a record annual price increase of 17.1% reflects what we’re hearing. Century 21 offices in Tuakau, Huntly, Te Awamutu, Mangakino, and Turangi are telling us buyer demand remains strong and some great prices are still being achieved,” says Ms Mayne.

“It’s positive news for overall sales prices, as well as the number of transactions and new listings. However, our agents are still screaming out for more stock. Demand is strong helped by record-low interest rates, many expats returning, lower deposits now required, and a spike in overall confidence since the country successfully managed Covid-19.”

The Century 21 boss says while it’s a case of ‘so far, so good’ the industry is conscious that the six-month mortgage holidays are coming to an end, as is the second round of wage subsidies.